The global microprocessor market size was valued at USD 83.3 billion in 2019 and is expected to grow at a compound annual growth rate (CAGR) of 4.1% from 2020 to 2027. The market is expected to witness an increase in demand at the global level owing to the growing use of microprocessors in consumer electronics, such as smartphones, personal computers (PC), and laptops. A microprocessor is an electronic component integrated on a single integrated circuit (IC) that contains millions of small components, including diodes, transistors, and resistors, which work together. This chip consists of various functions such as timing functions, data storage, and interaction with the peripheral devices. These ICs are used in various electronic devices such as servers, tablets, smartphones, and embedded devices, among others.

Rapidly growing demand for smartphones and tablets is expected to fuel the market growth over the forecast period. According to GVR analysis, globally, approximately 75% of the total mobile phone owners will own a smartphone by 2025. A microprocessor enhances the performance of the smartphone as it is used for enhancing the speed and efficiency of a smartphone. The performance speed of any smartphone is directly proportional to the performance of the microprocessor. Moreover, with the advent of ‘smart’ devices, electrical products such as televisions, digital cameras, laptops, and wearables devices offer various advanced technologies such as flat screens, touch screen monitors and displays, and Bluetooth, which require a larger number of ICs.

Microprocessors were initially designed for their use in personal computers and servers. These ICs are now being used in automotive applications, such as infotainment systems and Advanced Driver-Assistance Systems (ADAS), to offer improved connectivity and high-speed to vehicle systems. Besides, microprocessors act as the brain of servers, PCs, and large mainframes. Moreover, they are used for embedded processing in various systems, such as networking gear, wearable devices, computer peripherals, set-top boxes, medical, televisions, industrial equipment, video-game consoles, and Internet of Things (IoT) applications. Microprocessors used for digital consumer applications, PCs, and communications generally use one of several RISC (Reduced Instruction Set Computer) architectures or a generic x86 processor. RISC cores decrease chip complexity by using simple instructions and keeping the instruction size constant without microcode layer or associated overhead.

On the other hand, factors such as high cost of manufacturing microprocessor integrated circuits, circuit designing cost, growing sales of low-priced mobile devices, declining shipment of individual computers, and high raw material prices are anticipated to hinder the market growth over the forecast years. However, due to various advancements in server processors, including Internet of Things (IoT) and Artificial Intelligence (AI), they are preferred over normal desktop processor depending on the applications.

The server processor with IoT and AI embedded microprocessor helps in reducing the unit cost for microprocessor, which, in turn, is having a positive impact on the market growth across the globe. These microprocessors are extensively being used in connected devices, data center facilities, and public clouds that allow the organizational data to move faster across the IT network. Thus, the organizations are incorporating these ICs to support the functioning of advanced technologies in devices, resulting in less operational cost.

The ASIC segment is anticipated to witness the fastest growth in the forthcoming years. The growth of this segment is attributed to the increasing adoption of the ICs in the consumer electronics industry due to their reliable performance and other advantages such as low consumption electric power, IP security, small size, and higher bandwidth. Besides, ASICs chips replace traditional components, such as solder joints and PCB traces, with one IC, which, in turn, helps to reduce the chances of failure and offers reliable industrial systems.

Furthermore, various types of ASIC such as full custom ASIC and semi-custom ASIC are offered by manufacturers. Full custom ASIC allows designers to customize logic cells, mechanical structures, and layouts and circuits, and optimize memory cells on an IC, which helps to decrease processing time and risks. Whereas, semi-custom ASIC has an advanced integrated static random-access memory and internet protocol cores, which help in the smooth functioning of the system.

Moreover, the personal computer manufacturers are collaborating with technology providers to provide high technology products to consumers. For instance, in 2018, Samsung announced a partnership with Avnet, Inc., a System on Chip and ASIC solutions provider. The partnership was intended to involve both the companies in designing and manufacturing ASIC that will help the consumers in gaining advantages from the latest and improved ASIC design solutions implemented with silicon ICs and advanced process technologies. 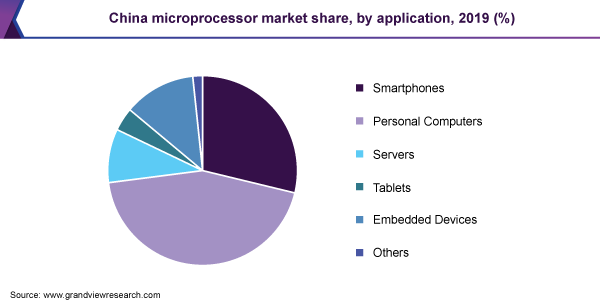 The servers segment is expected to witness significant growth over the forecast period. The server microprocessor supports multiple cores, multiple threads, and multiple processors to maintain its performance level and at the same time, are competent in overcoming failures in case of a power cut or crash. Over the period, the server microprocessor has developed through various improvements and innovations, such as storage capacity, clock rate, and increased transistors and resistors operating frequency.

The server processors are designed to carry out intense workloads for the Information and Technology (IT) companies from server rooms and data centers to the cloud providers. Furthermore, server microprocessors offer large storage capacity with the capability to insert multiple disks into it. Besides, it provides enhanced storage interconnection technologies such as primary storage devices in desktop computers and serial-attached Small Computer System Interface (SCSI), offering improved performance over Serial Advanced Technology Attachment (SATA). Other than server applications, these ICs are used in multiple applications such as personal computers, embedded devices, and smartphones.

The Asia Pacific held the largest share of 56.5% in 2019 and is expected to emerge as the fastest growing regional market over the forecast period. The growth is attributed to the rising penetration of smartphones and other electronics, such as laptops, mobiles, desktops, and tablets, in the region. Developing economies such as China and India are also supporting the market growth due to various factors such as rapid digitization, growing penetration of high-tech gadgets, and advancement of automotive electronics. Moreover, rising usage of the Internet of Things (IoT), huge IT spending by the government, and increasing demand for cloud-based services are likely to drive the regional market over the forecast period.

Moreover, the recent spread of the COVID-19 pandemic across the globe has strongly hampered the steady growth of the regional market. Most notably, the Chinese market is expected to be largely affected as several manufacturing plants remain closed to curb the impact of the Coronavirus. However, since the Coronavirus situation in China has almost plateaued, the market is likely to witness a strong economic recovery.

North America is anticipated to witness considerable growth over the forecast period. The growth is attributed to the significant presence of prominent players in the region, including Intel Corporation., Qualcomm Technologies Inc., and Texas Instruments Inc. In the present scenario, the U.S. dominates the market in North America. The high development of consumer electronics products, healthcare monitoring systems and electric and hybrid vehicles is a key factor contributing to the market growth in the U.S.

Microprocessor providers are focusing on research & development, which, in turn, would help increase their market presence. For instance, in June 2017, Advanced Micro Devices (AMD), Inc. announced the launch of EPYC 7000 series, a server processor for data centers. This EPYC 7000 series have up to 32 high-performance cores per chip, which meet the rising demand for high-computing efficacy and low-energy server software. Some of the prominent players in the microprocessor market are:

This report forecasts revenue growth at the global, regional, and country levels and provides an analysis of the latest industry trends and opportunities in each of the sub-segments from 2016 to 2027. For the purpose of this study, Grand View Research has segmented the global microprocessor market report on the basis of technology, application, and region:

How big is the microprocessor market?

What is the microprocessor market growth?

Which segment accounted for the largest microprocessor market share?

b. Asia Pacific dominated the microprocessor market with a share of 56.5% in 2019. This is attributable to the rising penetration of smartphones and other electronics, such as laptops, mobiles, desktops, and tablets, in the region.

Who are the key players in microprocessor market?

What are the factors driving the microprocessor market?

b. Key factor that is driving the market growth include growing use of microprocessors in consumer electronics, such as smartphones, personal computers (PC), and laptops.