The global mushroom market size was valued at USD 50.3 billion in 2021 and is expected to expand at a compound annual growth rate (CAGR) of 9.7% from 2022 to 2030. The increasing vegan population demanding a protein-rich diet around the globe is expected to be a key driver for the market over the forecast period. Mushrooms are considered a superfood owing to their nutritional contents. Mushrooms are packed with four key nutrients namely selenium, vitamin D, glutathione, and ergothioneine. These nutrients help mitigate oxidative stress and prevent or decrease the risk of chronic conditions such as cancer, heart disease, and dementia. Moreover, it offers a strong natural umami flavor, allowing consumers to reduce salt proportion in mushroom meals by 30-40%, thereby benefitting health. 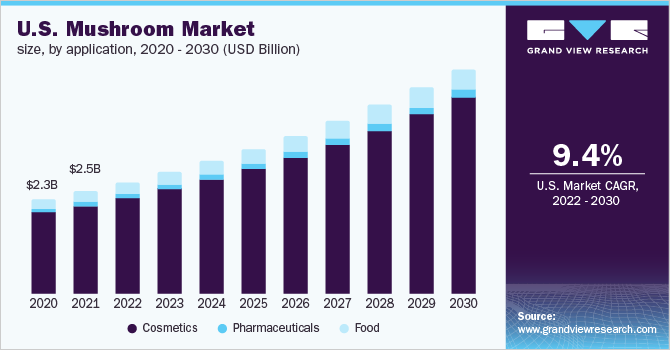 The U.S. was the second-largest producer accounting for approximately 375 million kg in the year 2019. The production in the country is declining since 2017 and has declined by 11% from 2017 to 2019. Whereas the demand from end-users is growing, which has resulted in an increase in the prices by 6% in 2017-18 and by 3% in 2018-19. The U.S. government is continuously increasing import duties, which is also contributing to the higher prices of mushrooms. Mushroom is one of the protein-rich vegan sources as it offers nearly 3.3 g of protein per 100 g of serving. Meat has been a key source of protein in the western diet; thus, the population adopting a vegan diet is anticipated to prefer protein-rich vegan products to fulfill their daily protein requirements.

Consumers are increasingly becoming label-conscious and seeking products made from natural ingredients. Clean label cosmetic products made from plant extracts, without the use of synthetic ingredients, are gaining considerable traction in the market. Thus, personal care & beauty product manufacturers are increasingly using botanical ingredients in cosmetic formulations which are expected to have a positive impact on the demand. Mushrooms have a limited shelf life ranging from one to three days due to the high water content in them. Thus, post-harvest storage and transportation are a crucial part of successful cultivation.

Furthermore, the outbreak of COVID-19 has led to the imposition of lockdowns to contain the spread of the disease. In the initial months of the pandemic, the logistics or goods transportation industry also faced a slowdown due to the unavailability of personnel and uncertainty generated due to the pandemic. This led to significant losses to growers, as mushrooms have a limited shelf life. Therefore, the limited shelf life of mushrooms is anticipated to restrain the market growth over the forecast period.

The button product type segment dominated the market and accounted for the largest volume share of 61.8% in 2021. The segment is expected to witness a revenue-based CAGR of 8.9% over the forecast period. They are widely cultivated across the world due to their numerous nutritional benefits and lower incubation time taken by their spores. Furthermore, their lower cost as compared to their counterparts is expected to drive the market over the forecast period. The shiitake product type is popular globally, mainly due to its rich savory taste and diverse health benefits. These mushrooms can be consumed in fresh or processed forms such as dried form; although dried shiitake mushrooms are more popular due to their umami flavor.

Shiitake mushrooms have been a part of traditional medicines in countries such as Japan, China, and South Korea, as their consumption boosts health and longevity, along with improved blood circulation. The oyster type is expected to witness the highest revenue-based CAGR of 11.3% over the forecast period. They are consumed in various cuisines and are highly popular in China, Japan, and Korea for cooking due to their delicate texture and mild-savory flavor. Moreover, oysters also have an active compound known as benzaldehyde, which reduces bacterial levels in the body and thus proves to be a natural anti-bacterial which is driving the demand from pharmaceutical applications.

Matsutake product type is expensive as it is not cultivated and is in high demand in Japan owing to its strong, spicy aroma, meaty texture, and earthy taste. In July 2020, the International Union for Conservation of Nature (IUCN) published the latest Red List and designated Matsutake product type as an endangered species due to a decline in its global growth. Therefore, Matsutake mushrooms' declining availability and high prices are likely to limit their market penetration in the coming years.

The fresh form dominated the mushroom market with a revenue share of 89.5% in 2021. Fresh mushrooms are witnessing a considerable upsurge in demand from the past few years owing to an increased number of consumers focusing on organic and unprocessed food consumption to gain maximum health benefits of the product. The distribution of fresh form is challenging for the manufacturers or distributors due to their limited shelf life. However, increasing technological advancements such as the use of modified atmosphere packaging have curbed the challenges associated with the limited shelf life of mushrooms, thereby favoring segment growth.

The processed form is expected to witness a revenue-based CAGR of 10.2% from 2022 to 2030. Processed types include dried, frozen, canned, pickled, and powdered forms. Additional processing such as canning, freezing, or drying is essential to extend the shelf life of mushrooms. The manufacturing companies are increasingly introducing packaged products to tap the markets of processed and convenience food products. Increasing usage of powder form and extracts by food and cosmetics manufacturers is expected to support industry growth over the projected period.

Distribution through online stores is expected to witness the highest revenue-based CAGR of 10.3% over the forecast period. Consumers across the world increasingly prefer the online mode for their fresh produce purchase owing to the convenience and price benefits offered by these channels. Online retailers account for a smaller share as of now as compared to supermarkets and hypermarkets. Grocery stores offer a broad range of processed products as compared to convenience stores with better discounts owing to their high-volume procurement than the latter. The limited space in cities of most countries favors the establishment of grocery stores in place of supermarkets and hypermarkets. However, the growing penetration of online retail is likely to benefit the mushroom market in the coming years.

The food application segment accounted for the largest revenue share of 86.8% in 2021. This application considers the utilization of fresh and processed forms by the household as well as food services. Mushrooms are low in fat and cholesterol; besides, they contain negligible sodium and gluten content. Along with this, mushrooms are packed with key nutrients including vitamins, minerals, proteins, and selenium. Thus, gaining high popularity among health-conscious consumers and fitness enthusiasts. Consumers are opting for healthier beverages and food products that are infused with nutrients extracted from clean or natural sources. To capitalize on this trend, food and beverage companies are launching mushroom-based food and beverages. For instance, in February 2021, U.S.-based FreshCap Mushrooms Ltd. introduced mushroom-infused functional beverages.

The Asia Pacific region led the market and accounted for over 78.6% share of global revenue in 2021. China, Japan, Malaysia, India, and Australia make up some of the largest markets in the region. China emerged as the largest producer in the region and has per capita annual consumption of up to 10 kg. 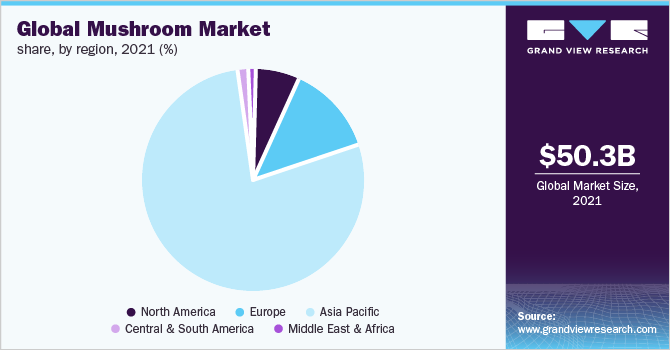 The Asia Pacific region has more prevalence of the traditional medicine systems, including Ayurveda and Traditional Chinese Medicines, which make use of several species of mushroom for the treatment of various diseases. Low calorie and high nutritional values, coupled with their immunity-boosting properties, are expected to drive the demand for mushrooms in the region.

Europe is one of the key consumers and relies majorly on imports. Higher per capita income in the developed market in the region is expected to create an additional opportunity for exotic mushrooms like gourmet products. The mushroom imports in the region were valued at approximately USD 183 million in the year 2019. The region was one of the worst-hit regions by the COVID-19 pandemic which largely impacted the imports from countries like China, Peru, and Chile, thereby affecting consumption. The local demand from hotels, restaurants, and food chains was largely impacted due to the lockdowns imposed to contain the spread of COVID-19.

North America holds a significant share in the market owing to higher market penetration in developed economies of the region, such as the U.S. and Canada. Consumers are willing to pay higher prices for premium products that are specifically produced using natural and organic ingredients. In addition, increasing preference for a vegan diet is expected to augment the demand for meat replacers such as mushrooms from food and dietary supplements industries over the forecast period.

Key players operating in developed regions increasingly emphasize sustainable production to attract an environment-conscious customer base and improve brand position. For instance, Monaghan Mushrooms aims to transit towards reusable and recyclable packaging by 2025 to bring sustainability to business operations. Thus, sustainability in business operations ranging from compost preparation and cultivation to packaging is likely to emerge as a key factor in the market in the coming years. The key companies operating in the mushroom market are as follows:

This report forecasts revenue growth at the global, regional, and country levels and provides an analysis of the latest industry trends in each of the sub-segments from 2017 to 2030. For the purpose of this study, Grand View Research has segmented the global mushroom market report on the basis of product, form, distribution channel, application, and region:

b. Asia Pacific region dominated the mushroom market with a revenue share of 78.6% in the year 2021 owing to high production rate and large consumer base present in the countries like China and India