Conventionally, Type 1 diabetes patients requiring regular glucose monitoring use needles, which increases the risk of infection and pain among individuals. Needle-free devices provide pain less delivery and negate the risk of infection. As a result, the demand for these devices is expected to increase during the forecast period. 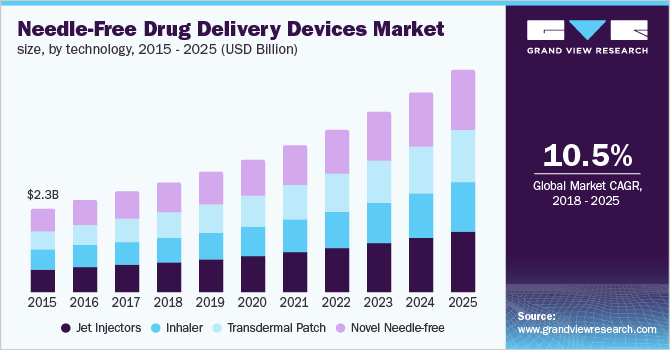 Rising pressure to curb the incidence rate of infectious diseases such as hepatitis, dengue fever, neurological disorders, and AIDS caused by West Nile virus during transmission is estimated to bode well for the growth of the market during the forecast period. For instance, according to the Centers for Disease Control and Prevention (CDC), in 2015, about 47,352 individuals were diagnosed with HIV infection, of which 3,096 individuals were attributed to the injection drug use (IDU).

The transdermal patch has gained popularity over the years owing to associated advantages such as maintaining constant drug levels, fewer side effects, and effective absorption of medications, which couldn’t be absorbed via GI tract. Additionally, as the substance is released evenly and directly into the bloodstream, less amount of medicine is required. Owing to the aforementioned factors, the segment is anticipated to register the highest growth during the forecast period are anticipated to boost the demand for transdermal patches in coming years.

In 2017, jet injectors accounted for the largest share in the market, due to benefits associated with them over other traditional drug transportation devices with needles. These benefits include faster drug delivery into bloodstream and insulin distribution over a larger area in lower layer of an individual's skin.

Jet injectors are utilized for a wide array of applications owing to their merits such as rapid administration, improved dosing accuracy, faster response rates, and better diffusion into tissues, reduced pain, reduced sharp waste, and easy portability. However, they can also be utilized for potential applications such as local anesthesia, intralesional corticosteroids, Direct palmar (BoNT-ONA, onabotulinum toxin A) BoNT-ONA, intralesional bleomycin, and Intralesional 5-ALA. These factors are projected to help the market remain dominant until 2025.

Insulin delivery was the most prominent application segment in the needle-free drug delivery device market in 2017.  The growth of the segment can be to rising incidence of diabetes and increasing shift towards unhealthy lifestyle habits. For instance, according to the Centers for Disease Control and Prevention, about 30.3 million individuals were affected by diabetes globally in 2017, of which 9.4% were U.S. citizens. However, about 23.1 million people were diagnosed and 7.2 million remained undiagnosed.

Moreover, owing to introduction of technologically advanced products such as insulin micropump, insulin pen, insulin spray, inhalable insulin, and other novel jet injectors, the insulin delivery segment is poised to post a lucrative CAGR during the forecast period. For instance, by 2019, Novartis is expected to launch an EpiPen that will cost around $250.0 and is cheaper than other EpiPen products available in the market. Additionally, Zeneno by Crossject is likely to be launched in the coming years and is estimated to have a lower target price. 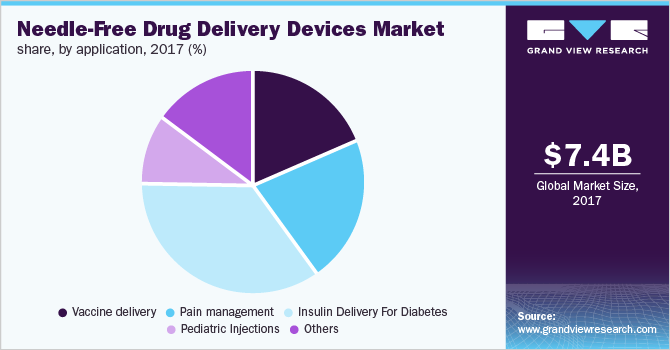 In addition, the pain management segment held a sizeable share in the market owing to mounting cases of medical conditions such as chronic pain, pain disorder, myofascial pain syndrome, arthritis, and migraines. For instance, according to the American Pain Foundation Chronic in 2017, pain affected about 40-50 million Americans per year.

North America accounted for approximately 44.0% of the overall revenue in 2017. High awareness regarding potential benefits of needle-free drug delivery devices has supported the dominance of the region in the global arena. Moreover, presence of well-developed healthcare facilities and extensive R&D expenditure by government organizations and pharmaceutical companies for diabetes and chronic pain management are also contributing to the growth of the market.

The needle-free drug delivery device market is marked by presence of various small and large companies. It is competitive in nature and dominated by key market players such as Antares Pharma, 3M, and Injex Pharma AG. Some other key players are Verdict Media Limited; Pharmajet; Zonenix; Inovio Pharmaceuticals, Inc.; Valeritas, Inc.; and Penjet.

Companies are adopting strategies such as new product launch, regional expansion, partnership, and distribution agreements to increase their market penetration. For instance, in October 2017, Antares Pharma and Ferring Pharmaceuticals entered into a definitive agreement. The latter received fixed assets from Antares and rights to sell ZOMAJET, needle-free auto-injector, worldwide. Additionally, in 2017, Takeda and Portal Instruments collaborated with each other to develop and commercialize Portal’s needle free drug delivery device, which is to be used with biologic medicines offered by Takeda Pharmaceuticals. Such initiatives are projected to propel the market during the forecast period.

This report forecasts revenue growth at global, regional, and country levels and provides an analysis of industry trends in each of the sub-segments from 2014 to 2025. For the purpose of this study, Grand View Research has segmented the global needle-free drug delivery devices market report on the basis of technology, application, and region: