The global neuralgia treatment market size was valued at USD 1.8 billion in 2019 and is expected to grow at a compound annual growth rate (CAGR) of 6.0% from 2020 to 2027. The increasing prevalence of diabetes and the high incidence rate of trigeminal neuralgia are some of the key factors responsible for the increasing demand for neuralgia treatment. In addition, conditions such as multiple sclerosis can also cause neuralgia. Multiple sclerosis is a neurodegenerative condition, in which the body’s immune system attacks the myelin sheath, causing neuralgia. 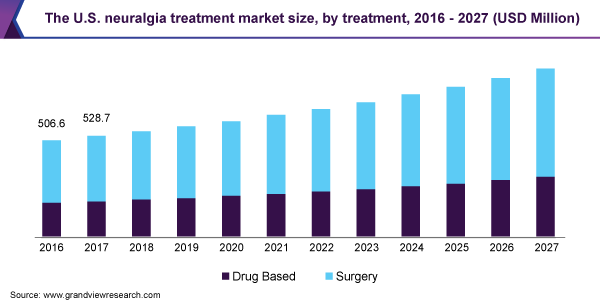 According to the study conducted by The National Multiple Sclerosis Society, approximately one million are suffering from multiple sclerosis in the U.S. Some of the other observations noted by the organization are:

The rising prevalence of diabetes is one of the major factors for increasing the prevalence rate of neuralgia, which, in turn, is driving the market. According to the American Diabetes Association, in 2018, 34.2 million Americans had diabetes, which was 10.5% of the entire population. It also reported that about 1.6 million in the U.S. have Type I diabetes, including 187,000 adolescents and children. The prevalence of diabetes is highest in the geriatric population aged 65 and older. Such factors are anticipated to boost the growth of the market for neuralgia treatment over the forecast period.

The surgery based treatment segment held the largest market share of around 65.0% in 2019 and is anticipated to witness significant growth over the forecast period. The segment growth is majorly driven by the rising awareness regarding various treatment options and the high cost of surgeries. The average weighted cost of neuralgia surgery is USD 40,000 for microvascular decompression, USD 38,000 for stereotactic radiosurgery, and USD 3,900 for percutaneous stereotactic radiofrequency rhizotomy.

The surgery segment has been further categorized into radiofrequency thermal lesioning, stereotactic radiosurgery, Microvascular Decompression (MVD), and others. MVD held the largest market share in 2019. It is the most common treatment procedure for trigeminal neuralgia. MVD, as a standalone treatment, has a success rate of approximately 80.0%.

The hospitals and clinics segment dominated the neuralgia treatment market and held the largest revenue share of 43.3% in 2019. The increasing number of surgical procedures and rising cases of neuralgia are the major driving factors for segment growth. According to the National Institute of Neurological Disorders and Stroke, trigeminal neuralgia is a progressive disorder and often become resistant to medication, thus, the patient usually opt for surgeries. 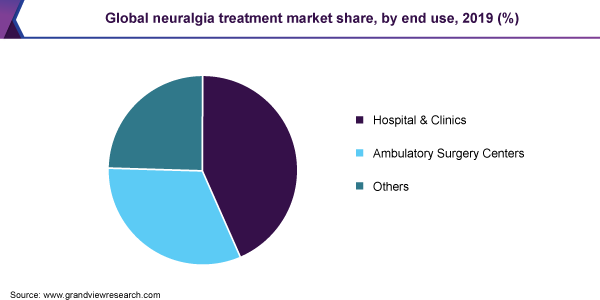 The ambulatory surgery centers segment is anticipated to witness the fastest growth over the forecast period. The growth of the segment is attributable to the rising demand for a reduced hospital stay. Treatment procedures such as radiofrequency rhizotomy, are outpatient procedures performed under general anesthesia. The procedure takes a few minutes in the operating room and a few hours in the recovery room.

Key companies are engaging in partnerships, mergers, and acquisitions, aiming to strengthen their product portfolio, manufacturing capacities, and provide competitive differentiation. Companies are stressing on research and development to develop technologically advanced products to gain a competitive edge. For instance, in February 2019, Zydus Cadila received FDA approval to market Carbamazepine, which is prescribed for the treatment of neuralgia. Some of the prominent players in the neuralgia treatment market include:

This report forecasts revenue growth at global, regional, and country levels and provides an analysis of the latest industry trends in each of the sub-segments from 2016 to 2027. For the purpose of this study, Grand View Research has segmented the global neuralgia treatment market report on the basis of treatment, end-use, and region:

How big is the neuralgia treatment market?

What is the neuralgia treatment market growth?

Which segment accounted for the largest neuralgia treatment market share?

b. North America dominated the neuralgia treatment market with a share of 36.64% in 2019. This is attributable to the rising incidence of neuralgia, the presence of key players in the region, and rising awareness regarding various treatment options.

Who are the key players in the neuralgia treatment market?

What are the factors driving the neuralgia treatment market?