The global neurological biomarkers market size was valued at USD 6.1 billion in 2020 and is expected to grow at a compound annual growth rate (CAGR) of 12.9% from 2020 to 2028. The market growth can be attributed to a rise in the prevalence of neurological diseases, such as migraines, dementia, Alzheimer’s disease, brain tumors, and epilepsy. In addition, technological advancements band the need for early diagnosis of neurological disorders are contributing to the market growth. According to the WHO, in 2016, epilepsy accounted for around 13 million disability-adjusted life years and more than 0.5% of the global burden of disease. Increasing cases of Alzheimer’s disease in older people are expected to fuel market growth. 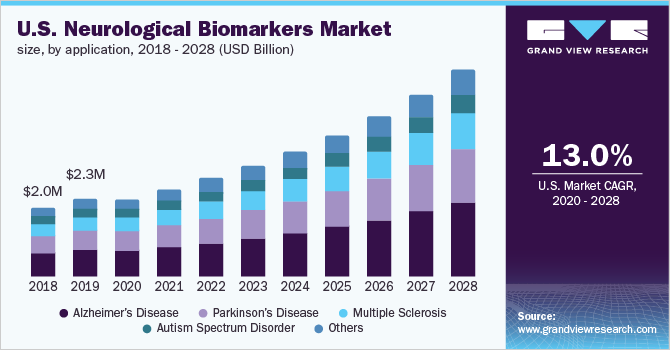 Thus, the presence of organizations offering funds at various stages of research is anticipated to drive market growth. For instance, the University of North Texas Health Science Center (HSC) was awarded around USD 45.5 million funds from the National Institutes of Health (NIH) to support research regarding health disparities in Alzheimer’s and brain aging. NIH is offering additional funds for biomarkers research for the ongoing Health and Aging Brain Among Latino Elders (HABLE) study.

The use of biomarkers is majorly limited to researchers for understanding the disease progression & pathology and pharmaceutical companies to develop therapeutics for neurodegenerative disorders by utilizing these tests for patient identification & assessment of drug tolerance in subjects. However, there are a few direct-to-consumer or commercial tests available in the market, such as APOE ε4, to predict the presence of a particular gene responsible for Alzheimer’s or related brain disease.

The proteomic segment accounted for the highest revenue share of over 32% in 2020. Genomic biomarkers accounted for the second-largest market share in 2020. Genomic biomarkers present promising opportunities for the development of personalized medicines and diagnostics based on an individual’s specific genetic variations & predisposition to the disease. The methods used for detecting the presence or studying genomic biomarkers for the identification of disease-associated DNA sequence variants include array Comparative Genomic Hybridization (CGH), gene expression profiling, whole-genome association studies using Single Nucleotide Polymorphisms (SNPs), and whole-genome resequencing.

The others segment is anticipated to witness significant CAGR over the forecast period due to the increasing adoption of digital biomarkers in clinical trials patient selection for neurological drugs. For instance, IXICO plc - a digital technology-based company, with expertise in neurosciences-is collaborating with biopharmaceutical companies to validate clinically digital biomarkers and use them in clinical trials.

The Alzheimer’s disease application segment accounted for the largest market share of over 34% in 2020 and is expected to remain dominant during the forecast period. This growth is credited to the high disease burden and availability of products for clinical use, such as imaging biomarkers-amyloid PET tracers for diagnosis. Furthermore, the government and non-profit organizations are providing a plethora of research opportunities that may fuel market growth. The Alzheimer’s Association in collaboration with The Michael J. Fox Foundation for Parkinson’s Research (MJFF), Alzheimer’s Research U.K., and the Weston Brain Institute, introduced Biomarkers Across Neurodegenerative Diseases (BAND) that provide research funding for biomarker discovery.

The hospital & hospital laboratories segment accounted for the largest market share of over 38% in 2020. The segment is expected to remain dominant even during the forecast period due to a rise in hospitalization. Furthermore, the ongoing development of healthcare infrastructure is anticipated to enhance the existing hospital facilities. Most of the blood-based biomarker assays are purchased by hospitals and are used in significant volumes. 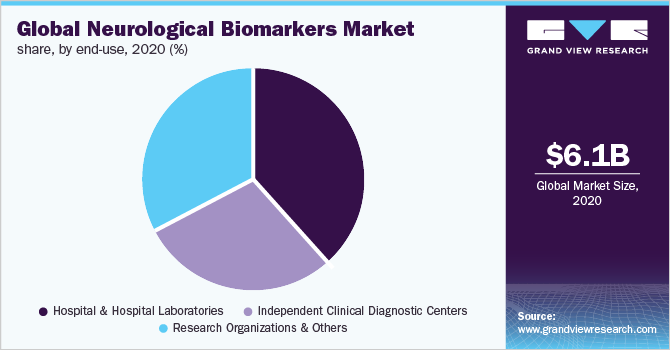 The research organizations & others segment is expected to grow at the fastest CAGR of more than 13% over the forecast years owing to the increased adoption of biomarkers by pharmaceutical companies and Ambulatory Surgery Centers (ASCs) for drug discovery & development.

North America accounted for the highest market share of over 41.07% in 2020 and is expected to witness a significant growth rate over the forecast period. The significantly high disease burden, acceptance of biomarkers for diagnostic, drug development & prognostic purposes, and increase in research funding are some key factors contributing to the dominance of the region. Moreover, the increasing product launches along with the rise in demand for biomarkers are expected to have a positive impact on the regional market.

Asia Pacific is expected to grow at the fastest CAGR of 13.6% from 2020 to 2028. An increasing number of clinical trials being conducted in developing countries, such as India and China, rising disease burden, and growing need for targeted drugs in the central nervous system are factors expected to drive the regional market growth.

Companies are adopting strategies that allow them to use their resources to aid in the development of new products and enhance their supply chain. For instance, in August 2020, Johnson & Johnson Services, Inc. entered into an agreement with Enigma Biomedical Group for the evaluation of novel neuroimaging biomarkers-JNJ-64413739 and JNJ-64511070-to understand Alzheimer’s disease and other dementias. Some prominent players in the global neurological biomarkers market include:

This report forecasts revenue growth at global, regional, and country levels and provides an analysis of the latest industry trends in each of the sub-segments from 2017 to 2028. For the purpose of this study, Grand View Research has segmented the global neurological biomarkers market report on the basis of type, application, end-use, and region:

How big is the neurological biomarkers market?

b. The global neurological biomarkers market size was estimated at USD 6.1 billion in 2020 and is expected to reach USD 6.8 billion in 2021.

What is the neurological biomarkers market growth?

Which segment accounted for the largest neurological biomarkers market share?

b. Based on application, Alzheimer's Disease segment held the largest share of 34.78% in 2020, owing to high prevalence of the disease and availability of a higher number of products for clinical use.

Who are the key players in neurological biomarkers market?

What are the factors driving the neurological biomarkers market?