The global neurology clinical trials market size was estimated at USD 4.8 billion in 2020 and is expected to expand at a compound annual growth rate (CAGR) of 5.5% from 2021 to 2028. This is largely attributed to increasing neurological diseases, such as dementia, stroke, and peripheral neuropathy, and growing R&D investments in neurological research.

However, Covid-19 is an unprecedented event that has impacted practically every part of businesses throughout the world while the pharma industry is being tapped to help bring out an effective treatment against the pandemic at the earliest. Trial enrolment, data collecting, and data analysis were all disrupted, causing delays in ongoing clinical trials. As of April 15, 2020, a total of 81 trials with a specific neurological indication had been recognized as being impacted by the pandemic. 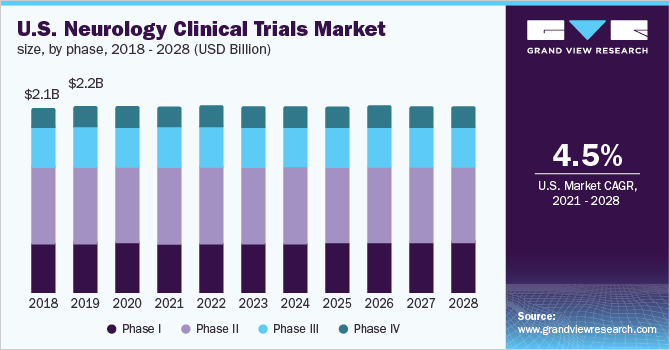 Neuroscience is a focus area of several large pharma firms. Experimental Alzheimer's treatments from AstraZeneca, Lilly, Merck, Novartis, Pfizer, and Roche all failed in late-stage testing, while Biogen, a prominent neuroscience company, plans to persuade regulators to approve a drug that operates similarly to its peers failed attempt. After accomplishing Alzheimer’s disease, drug makers have turned their attention to other neurological diseases such as spinal muscular atrophy. Since the end of 2016, effective therapies from Biogen and Novartis have been authorized.

In contrast to the 1990s and early 2000s, drug makers now have better tools for manipulating and correcting genes. As a result, disorders caused by single genetic mutations, such as spinal muscular atrophy, appear to be easier to target and less risky attributes that might appeal to large corporations contemplating a return to neuroscience. For instance, Pfizer has entered the Duchenne muscular dystrophy through its acquisition of Bamboo Therapeutics, while Roche has shown interest in an Ion is Pharmaceuticals Huntington’s disease program.

The phase II clinical trials segment dominated the market for neurology clinical trials and held the largest revenue share of 36.7% in 2020. This is largely due to the fact that neurological disorders are extremely rare and there is no specific treatment available. Phase II and phase III trials account for the vast majority of trials. From 1999 to 2020, a total of 8,205 CNS trials were conducted, with 609 trials being conducted in 2020.

Phase III is anticipated to register the fastest growth throughout the forecast period. This growth may be attributed to the fact that phase III clinical trials are the costliest and involve a large number of participants. Phase III also requires a larger number of patients and, in many cases, a longer treatment term. The median cost of phase III central nervous system clinical trial is USD 19.2 billion. From 1999 to 2020, a total of 12,089 CNS trials were conducted, with 629 trials being conducted in 2020.

The Huntington’s disease segment is anticipated to register the fastest growth rate of 6.0% throughout the forecast period. This is largely attributed to increasing R&D investment and the high prevalence of the disease all around the globe. The EU Clinical Trials Register lists 40,633 clinical trials using the EudraCT protocol, with 6629 of those including children under the age of 18.

Based on the study design, the interventional segment led the market for neurology clinical trials and accounted for the largest revenue share of 81.2% in 2020. It is one of the most prevalent methods for conducting a clinical experiment. The interventional studies accounted for 78.0% of all registered studies, with the majority of studies related to drugs or biologics, followed by behavioral, clinical procedure, and device intervention studies. 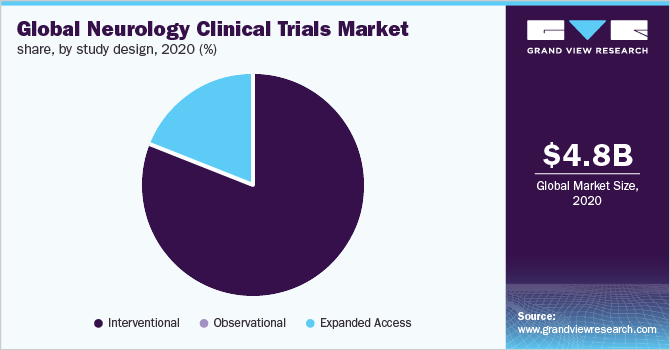 The observational segment is anticipated to witness substantial growth over the forecast period. In a variety of situations, such as post-marketing safety evaluations of drugs or when clinical trials are not feasible, observational studies are routinely used to evaluate treatment effects. In observational studies, the prevalence of key prognostic factors linked with both treatment and outcome often differs between treatment groups.

North America dominated the neurology clinical trials market and accounted for the largest revenue share of 45.8% in 2020. The rising prevalence of neurological disorders and the presence of a large number of players in clinical trials are driving the market for neurology clinical trials in the region. As the population ages and total life expectancy rises, dementia would become more common, with an estimated 8.4 million Americans aged 65 and older suffering from Alzheimer's disease or another dementia by 2030.

In the Middle East and Africa, the market for neurology clinical trials is anticipated to register the fastest CAGR of 8.2% throughout the forecast period. The Sub-Saharan Africa region is afflicted by neurological, psychiatric, developmental, and substance use disorders that are caused by or aggravated by a lack of adequate nutrition and infectious disease, regardless of the fact that disorders connected to increasing longevity, such as stroke, are on the rise. Due to the conflict-torn environment in the Middle East and North Africa, major depressive disorders and post-traumatic stress disorder are serious problems.

Market participants are implementing a range of strategic initiatives, such as new partnership agreements, collaborations, mergers and acquisitions, and geographic expansions, with the aim of strengthening their services and gaining a competitive edge.

For instance, in January 2021, Sosei, based in Japan, and Pharm Enable, based in the U.K., partnered to develop new drugs for a G protein-coupled receptor (GPCR) target linked to a number of neurological disorders. They used artificial intelligence-enabled technology and advanced chemistry to research neurological disease treatment. Some of the prominent players in the neurology clinical trials market include:

This report forecasts revenue growth at global, regional, and country levels and provides an analysis of the latest industry trends in each of the sub-segments from 2016 to 2028. For the purpose of this study, Grand View Research has segmented the global neurology clinical trials market report on the basis of phase, study design, indication, and region:

What is the neurology clinical trials market growth?

How big is the neurology clinical trials market?

b. The global neurology clinical trials market size was estimated at USD 4.8 billion in 2020 and is expected to reach USD 5.1 billion in 2021.

b. North America led the global neurology clinical trials market with the largest revenue share of 45.8% in 2020. With an estimated 8.4 million Americans aged 65 and older suffering from Alzheimer's disease or another dementia by 2030, demand for new therapies and the presence of a large number of players in clinical trials drive the market growth in the region.

Who are the key players in the neurology clinical trials market?

b. Some of the players operating in the neurology clinical trials market are IQVIA, Novartis, Covance, Medpace, Charles River laboratories. Others include Syneos health, Icon Plc, GlaxoSmithKline, Aurora healthcare, and Biogen.

What are the factors driving the neurology clinical trials market?

b. In contrast to the 1990s and early 2000s, drugmakers now have better tools for manipulating and correcting genes. As a result, Neuroscience is a focus area of several large pharma firms.