The global night vision device market size was valued at USD 5.84 billion in 2018 and is expected to register a CAGR of 8.1% from 2019 to 2025. The growing popularity of the devices among nature enthusiasts and wildlife researchers is likely to propel the demand. Moreover, the reasonable cost and technical feasibility of providing soldiers with night vision devices capable of producing color images are expected to drive the market growth.

Night vision devices such as goggles find several uses in the military sector, such as surveillance, navigation, rescue, and combat activities. Law enforcement authorities use night goggles to conduct training activities and to ensure the mission readiness of the defense personnel. A suitable set of the night-vision device can allow clear visibility over 150-200 yards on a moonless cloudy night. This factor is anticipated to drive product demand over the forecast period. 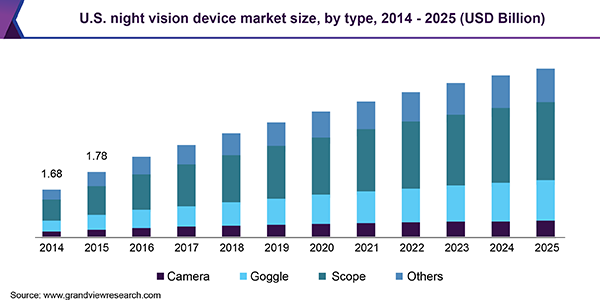 Technological innovations such as improvements in the components used in night vision devices contribute to night vision device market development. For instance, the integration of weapon locating devices such as rangefinders and viewfinders with goggles allow military personnel to aim at the target with great accuracy. The rising availability of such advanced products is also likely to drive growth. The demand for lightweight night vision devices is gaining traction in the market. Lightweight binocular devices offering high optical performance are presently available in the market.

Currently, BAE Systems, L3, Harris Corporation, and DRS are engaged in the development of Enhanced Night Vision Goggles (ENVGs) and Family of Weapon Sight-Individual (FWS-I) as contracted with the U.S. Army. ENVGs help soldiers navigate easily in all conditions and levels of light, hence improving the functional value of the night vision goggles. A major advantage is the rapid target detection that improves shooting accuracy by offering a simultaneous line of visibility that enables the shooter to aim effortlessly.

Stringent norms and regulations set by governments on product usage and the high intensity of market competition represents a major challenge for key players. In addition, significant costs of manufacturing, limit the production capacity, and therefore these devices are made available only to the military forces. Moreover, the commercial availability for the general population increases the chance of security breaches in government premises, thus restraining the market growth.

In terms of type, the scope devices segment accounted for the largest market share in 2018 and was valued at USD 2.56 billion. The demand for scopes is relatively higher than goggles as they offer better performance. Scopes are mainly used as weapon sights despite the fact that they are large and heavier than goggles. In addition, this product can be used for navigation as well as scouting purposes.

Goggles find extensive use in the defense sector across the globe due to their versatility during night operations. Automotive manufacturers are emphasizing on integrating these devices with Advanced driver-assistance Systems (ADAS) for cars. Moreover, the rise in the trend of night tours for photography is creating lucrative growth prospects for the segment.

The camera segment accounted for a substantial market share in 2018 and is expected to register a steady CAGR over the forecast period. The growth of the camera segment is attributed to lower purchasing and maintenance costs. Moreover, cameras are more flexible, lightweight, and are detachable.

Based on technology, the market can be segmented into image intensifiers, thermal imaging, and others. Thermal imaging accounted for the largest market share and was valued at USD 2.27 billion in 2018. There are two types of thermal imaging devices, namely, uncooled and cryogenically-cooled. Uncooled devices are the most common ones operating and can operate at room temperature. Cryogenically-cooled devices are relatively expensive and are highly susceptible to damage due to rough use.

The image intensifier is expected to be the fastest-growing segment owing to the high popularity and significance of devices based on the technology. These devices are categorized by a generation with each significant change in night vision technology giving rise to a new generation of devices. At present, Generation 3 devices are extensively used by the U.S. military owing to better resolution and sensitivity. Generation 4 devices are termed as filmless and gated since they function efficiently in both low as well as high-light environments.

In terms of application, the defense segment accounted for the largest share of the market in 2018 and is expected to expand at a significant CAGR over the forecast period. The notable rise in military activities at nights and during conditions with poor visibility has led to a significant rise in demand. 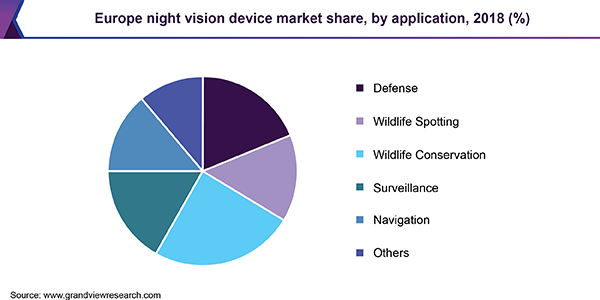 In 2018, the wildlife conservation application stood as the second-largest segment owing to the rise in night safaris and wildlife research activities. Funding provided by governments to carry out wildlife research has enabled researchers to employ advanced products.

Wildlife research activities necessitate the use of a variety of devices, especially during nights as surveillance and navigation often form a major part of wildlife research. The thermal imaging technique is often used to serve this purpose as it amplifies the light and enables high visibility for objects perceived identical in the day time. It also spots the difference in body temperature, which makes it easy to differentiate between animals and humans. Commonly used thermal imaging devices for hunting are imaging monocular and thermal imaging rifle scopes.

North America led in 2018 owing to the extensive usage of products in the U.S. army. In addition, intensive R&D activities undertaken for devising advanced devices contribute to the promising development of the regional market. It was valued at USD 3.18 billion in 2018 and is expected to account for a higher revenue share by 2025, which can be attributed to the presence of a large number of vendors.

Asia Pacific is expected to witness the fastest growth, attributed to the rise in border disputes, extensive rise in expenditure on weapons and devices in the defense sector, and a notable rise in demand from the commercial sector. Constant developments in technology and a notable rise in the use by military forces are likely to boost regional growth.

Europe accounted for a significant share of the market in 2018 and is expected to expand at a steady pace in the next six years. Countries such as Germany, France, and U.K. are increasingly adopting the products for city surveillance applications.

This report forecasts revenue growth at global, regional, and country levels and provides an analysis of the latest industry trends in each of the sub-segments from 2019 to 2025. For the purpose of this study, Grand View Research has segmented the global night vision device market report based on type, technology, application, and region:

To address the surge of COVID-19, governments all over the world are developing stringent surveillance mechanisms to ensure that people in high-risk zones, or those instructed to be under strict home quarantine. Smartphone apps integrated with geotagging features have been rolled out by various governments to ensure adherence to social distancing. Health surveillance in the wake of this pandemic has essentially become a mic of technology and human intelligence. The updated report will account for Covid19 as a key market contributor.