The orthodontic consumables market was estimated to reach USD 3.0 billion in 2015. Crooked teeth, improperly positioned teeth, and the condition where the jaws don’t align with each other while closing are recognized to the top conditions that fall under the orthodontics branch of dentistry. Besides, orthodontics also reinstates dental aesthetics and prevents tooth decay and periodontal disease from occurring. An in-depth analysis of the orthodontic consumables market highlights the drivers that are likely to increase market growth.

Factors such as high prevalence of malocclusion, a highly prevalent dental condition, have been estimated to affect almost 50% to 75% of the population of major developed countries; growing aging population and their dependency on dental services; and escalating demand of cosmetic dentistry are expected to be the drivers. Furthermore, advances in dentistry, the growing popularity of preventive orthodontics, and increasing awareness in people to seek oral treatments and maintain a healthy mouth are also anticipated to contribute to a positive shift in the demand curve and result in a more lucrative market segment in the upcoming future. This can be validated by the fact that the average expenditures for U.S. dental services increased from USD 105 billion in 2010 to USD 114 billion in the year 2014.

Another extremely important factor is “evolution.” As food habits are changing, the requirement for large bulky jaws is receding, which has led to smaller jaws in humans, and lack of space for 32 teeth in smaller jaw results in malocclusion. This is indirectly driving the orthodontic consumables market. 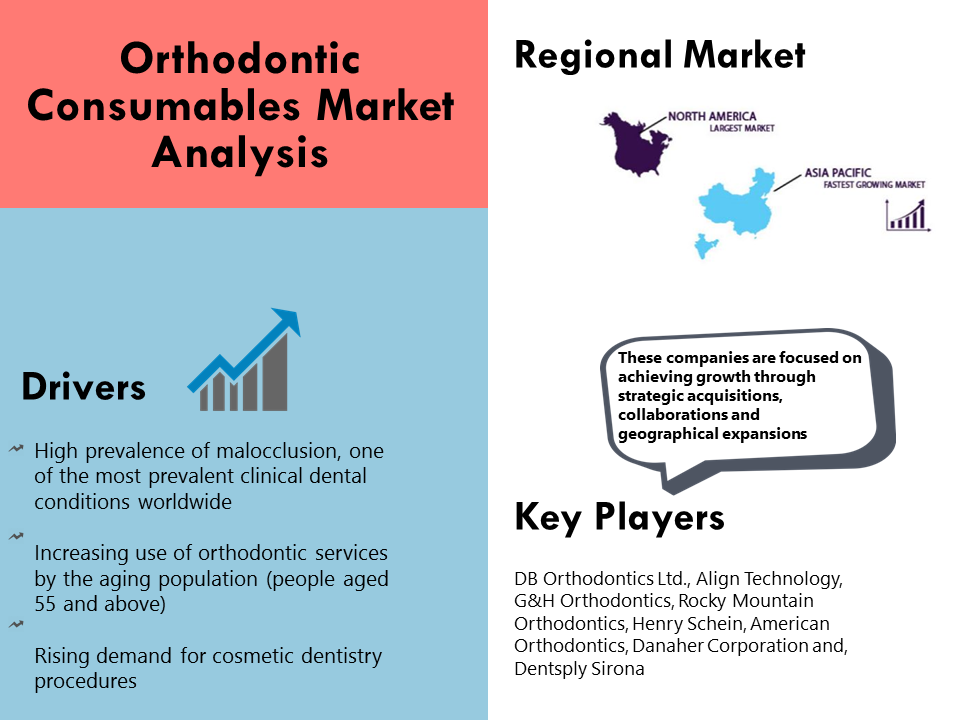 However, certain compelling problems such as low access to oral health care in developing countries and the lack of availability of oral healthcare facilities in rural areas are expected to be restraining factors. Access to proper dental facilities is a compelling issue and is majorly faced by underprivileged nations. Developing countries are taking active steps to address the issue and are refurbishing their existing approach with technologically advanced systems to create affordable and accessible care for the population.

Dental problems are among the most common health problems faced by geriatric population. According to several studies, people aged over 65 with natural teeth are subject to more tooth decay compared to other age groups, resulting in their multiple visits to dentists. In addition, shrinking of gums exposes teeth to infection or decay.

The market is likely to be particularly benefitted from countries with high geriatric population, such as Japan, the EU, and the U.S. In Japan, more than 27% of the total population is over 65 years; in Italy, it is ~23% and in Portugal, it is 22%. According to the U.S. Census Bureau’s 2017 National Population Projections, by 2030, the elderly is expected to outnumber youths for the first time in the U.S. history. In addition, by 2035, ~78.0 million people are expected to be aged over 65, and ~76.7 million people are likely to be below 18 years old. These demographic changes are expected to boost the demand for Cosmetic Dentistry (CD).

With the rising disposable income and increasing healthcare expenditure in developed and emerging economies, dental care has become a priority. Adoption of new technologies, such as 3D printing and dental lasers, has presented a lucrative growth opportunity for the dental industry. Improved precision & efficiency of these technologies has been beneficial for dental practitioners in providing high-end dentistry solutions. In addition, increasing demand for long-term alternatives to traditional procedures has led to a rise in research related activities and a higher uptake of novel dental treatments.

Orthodontics is a subsegment of CD and is likely to witness growth as an effect of the rising demand for the latter. Orthodontics deals with dentofacial augmentation and smile designing, both of which are major constituents of CD. Various campaigns & activities launched in various countries, such as Oral health Foundation's initiatives, including National Smile Month, Dental Buddy, and others, in the UK, are creating awareness about dental health and related schemes.

Rural areas are geographically isolated and lack dental professionals, as well as dental facilities. The Health Resources and Services Administration in the U.S. is actively involved in identifying oral health disparities and devising steps to troubleshoot problems associated with the lack of access to oral healthcare in rural America. Despite great achievements, the global oral health burden is still prevalent in underprivileged groups in developing and underdeveloped countries. Low provider to population ratio, insufficient benefits, geographic barriers, poverty, and cultural barriers in rural areas could significantly affect short-term as well as long-term growth of the market.

Self-ligating brackets are anticipated to witness the highest growth

The brackets segment is anticipated to grow at a healthy CAGR in the forecast period. Self-ligating bracket is the most lucrative sub-segment within the bracket segment, as it does not require external ligature or elastic to hold the archwire in position.

North America has been recognized as a high-growth dental segment and commands the highest share followed by Europe. The U.S. is catapulting growth in the market, given the increase in the U.S. population, mainly the aging segment; technological advances in dentistry; and the increasing coverage by dental insurance plans. Additional contributing factor is use of direct sales by companies in the U.S. and Canada, which adds more impact to a sale due to the personal touch and results in higher sales. One such example is the Invisalign System that is primarily sold through direct sales in the core countries as well as in Europe & certain Asia Pacific countries, including Australia, New Zealand, China, and Japan The same companies use the distributor model to sell their products in other countries.

Germany is a major contributor to the European market for orthodontic consumables with 20.4% share. Availability of advanced dental facilities can be attributed to the major share of the German market. Germany has developed a classification system (KIG) that is based on the Index of Orthodontic Treatment Need (IOTN). The German public health insurance enables provision of free orthodontic treatment for children aged 18 and below, according to the KIG classification for a particular dental anomaly. In addition, local presence of leading players, such as the 3M Company and Henry Schein Inc., along with their widespread distribution channels, is also expected to boost the German market.

Asia Pacific is expected to witness rapid growth due to positive market dynamics in consumable sales, high population density, and severity of dental diseases in the region and the gradual advent of dentistry in the region.

According to the 2018 World Population Data Sheet, by 2050, around 26% of the population will be aged over 65 in China, while the geriatric population in Singapore is projected to be 34% of the total population. The geriatric population percentage in South Korea and Taiwan with 35% each, is expected to be second to 36% in Japan by 2050. Currently, Japan has the highest percentage of 28% of those 65 years and above, while India has 6% of aged population. Thus, Asia Pacific presents a high growth potential for the orthodontic consumables market, which will benefit from its ageing population.

Invisalign aligners is an upcoming sub-segment in orthodontics. As more and more people are becoming appearance-conscious, the demand for these invisible customized aligners is on the rise.