The global petrochemicals market size was valued at USD 556.09 billion in 2021 and is expected to expand at a compound annual growth rate (CAGR) of 6.2% from 2022 to 2030. The demand for petrochemicals is attributed to an increase in the demand for downstream products from various end-use industries such as construction, pharmaceuticals, and automotive, which is a major factor driving the market. Petrochemical is a vital component for many industrial processes, and hence forms the backbone of an industrial economy. Some of the products derived from petrochemicals include tires, industrial oil, detergents, and plastics. Basic plastic derived from the product act as a building block in the manufacturing of consumer goods. 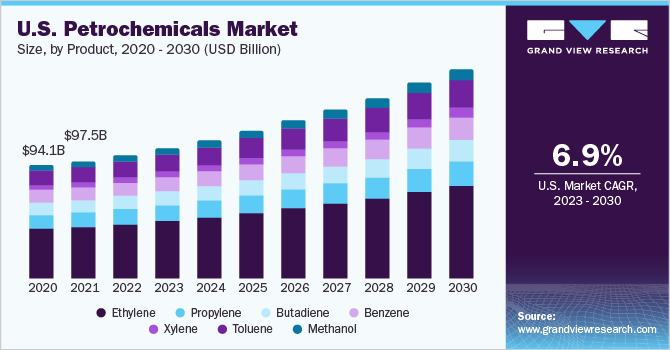 End-use industries evaluate the quality of products supplied from time to time and establish procurement agreements with suppliers to purchase petrochemicals derivatives in bulk and ensure their stable and seasonal supply. An increasing number of product suppliers in the market has resulted in the high bargaining power of the buyers.

The industry is significantly affected by the prices of crude oil as it is a basic raw material used for the manufacturing of the product. The volatility in the prices and supply of crude oil has affected the production cost of petrochemicals, which, in turn, makes their production process costly. Factors such as the growing inclination of consumers in the developed and developing regions toward environment-friendly products and the volatile prices of raw materials of petrochemicals are likely to hamper the market growth in the coming years.

The steam cracking process is one of the most commonly used processes for manufacturing petrochemicals from natural gas or crude oil. In this process, ethane, a derivative of natural gas or naphtha that is predominantly derived from crude oil, is used for the manufacturing of olefins. A steam cracker has equipment operating at pressure from near-vacuum to 100 atm and operating at temperatures from 100 K to 1400 K.

Ethylene dominated the market with a revenue share of over 40.0% in 2021. This is attributed to an increase in demand for ethylene from various industries such as construction, packaging, and transportation. Ongoing industrialization and flourishing automotive and packaging sectors in emerging economies such as India, Brazil, Vietnam, and Thailand are expected to fuel the consumption of ethylene in the countries over the forecast period. Surged use of polyethylene, High-density Polyethylene (HDPE), and Low-density Polyethylene (LDPE) is expected to foster the overall growth of the market for petrochemicals.

The methanol segment is predicted to register the highest revenue-based CAGR of 7.8% over the forecast period. Methanol is used as a feedstock for producing acetic acid and formaldehyde, which are used in foams, adhesives, foams, solvents, plywood subfloors, and windshield washer fluids. The demand for methanol is predicted to witness growth on account of its high demand in several end-use industries such as construction, paints and adhesives, pharmaceuticals, plastics, and automotive.

Butadiene was the second-largest product segment in 2021, in terms of revenue. It is majorly utilized as a chemical intermediate and a monomer during the production of polymers such as styrene-butadiene rubber (SBR), Polybutadiene Rubber (PBR), Polychloroprene (PBR), and Nitrile Rubber (NR). Butadiene derivatives have witnessed a significant increase in demand specifically in China, India, and other Asian countries owing to the flourishing end-use industries such as automobile, consumer goods, and construction.

Asia Pacific dominated the market with a volume share of over 50.0% in 2021. The flourishing chemicals industry and the increase in polymer consumption are anticipated to be the key factors for the market growth in this region. Companies in the region are shifting toward natural gas liquids and other non-oil feedstocks to cater to the rising demand for the product, along with strategizing cost-effective methods to increase sales of the products. 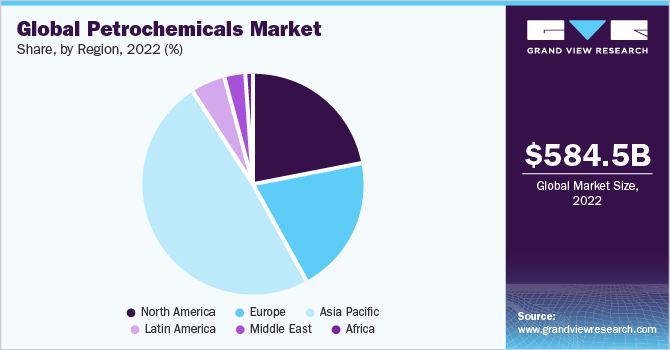 Europe is anticipated to register a revenue-based CAGR of 5.7% over the forecast period. This is due to the ongoing recovery of the overall manufacturing sector from the global pandemic in Europe, coupled with the addition to the oil and gas capacity of the region. The market in Western Europe is anticipated to witness stagnant growth owing to market saturation. Increasing ethylene production in key countries, such as Germany, France, and the U.K., has led to the surged demand for petrochemicals from manufacturers to produce various industrial chemicals.

The rising demand for petrochemicals in various applications such as automobiles, packaging, household goods, and medical equipment is a key factor encouraging the manufacturers operating in this segment to increase their production capacity across the globe. Companies engaged in manufacturing petrochemical products continuously undergo mergers and acquisitions and joint ventures with governments and other key players that are already in the field of oil and gas. Through these operational integrations, companies seek to expand their reach to potential customers at optimum distribution cost.

China National Petroleum Corporation signed an agreement with the Republic of Benin to construct a pipeline from Niger to the Atlantic coast in Benin to strengthen its crude oil business footprint in Africa. LyondellBasell Industries Holdings B.V. and the China Petroleum & Chemical Corporation announced a 50-50 joint venture to produce propylene oxide (PO) and styrene monomer (SM) in China. Some prominent players in the global petrochemicals market include:

This report forecasts revenue and volume growth at the global, regional, and country levels and provides an analysis of the latest industry trends and opportunities in each of the sub-segments from 2018 to 2030. For the purpose of this study, Grand View Research has segmented the global petrochemicals market report on the basis of product and region:

How big is the petrochemicals market?

What is the petrochemicals market growth?

Which segment accounted for the largest petrochemicals market share?

b. The Asia Pacific dominated the petrochemicals market with a share of over 50.0% in 2021. This is attributable to favorable regulatory policies in the Asia Pacific and focuses on the development of the manufacturing sector.

Who are the key players in the petrochemicals market?

What are the factors driving the petrochemicals market?

b. Key factors that are driving the petrochemicals market growth include rising demand for downstream products from end-use industries and capacity additions in the base chemical industry.

The COVID-19 outbreak has significantly affected the petrochemical production output and supply chain across the world. The lockdown and travel restrictions in China have resulted in the declined consumption of petrochemical products in the country. China has also reduced the production output of petrochemicals as well as its downstream products such as polymers and synthetic rubbers due to a shortage of workforce and limited inventory. The reduced demand for oil and petrochemicals from China has resulted in a price decline of these products, thereby providing opportunities for countries such as India to procure oil at discounted prices. The updated report will account for COVID-19 as a key market contributor.