The global pharmaceutical sterility testing market size was valued at USD 733.7 Million in 2016. It is estimated to register a CAGR of 11.8% over the forecast period. Government investments in the healthcare industry, increasing R&D activities and number of drug launches, and rising focus on quality and sterility are projected to drive the market. According to the UNESCO report, the U.S., China, Japan, and Germany were among the top five nations in terms of R&D expenditure in 2016. 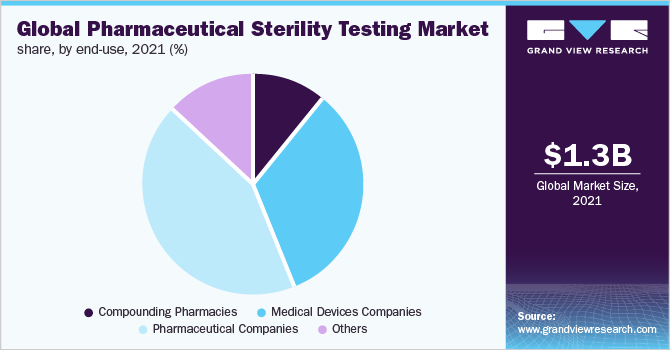 The U.S. spends nearly 2.7% of its GDP on R&D, whereas China spends approximately 2.0% of GDP on R&D activities. Annual R&D expenditure of China has increased by nearly 70.9% from 2012, as per the CNBC report. Heavy R&D investments are anticipated to increase the number of product innovations; thereby, indirectly facilitating the sterility testing market.

Several developing nations streamlined their drug approval regulatory timelines to accelerate drug launch in order to meet rising healthcare demands. Such regulatory changes are projected to boost market growth. Moreover, drugs such as Elagolix and Lanadelumab are biopharmaceutical products requiring special sterility testing procedure, and thereby, launch of such products is said to bolster the growth of the market.

On the basis of type, the market is segmented into in-house and outsourcing. The outsourcing segment led the market share accounting for USD 400.9 million in 2016 and is projected to grow at a rapid pace over the forecast period.

The in-house sterility testing market is an essential part of quality assurance and Goof Manufacturing Practices (GMP) for the manufacturers of pharmaceutical, biopharmaceuticals, and medical devices. Sterility testing is mandatory for release of each batch, which facilitates the segment’s growth.

The key end-use segments include compounding pharmacies, medical devices and pharmaceutical companies, and others such as hospitals, biopharmaceuticals, clinics, and research labs. The others segment is projected to register a lucrative CAGR over the forecast period owing to increasing R&D activities, outsourcing services, and rise in innovative biopharmaceutical products.

The bacterial endotoxin testing segment accounted for the highest market share in 2016 and is anticipated to register a lucrative CAGR over the forecast period. This can be attributed to the ongoing technological advancements in this segment.

The sterility and bioburden testing segments are anticipated to witness rapid growth over the forecast period. Increasing emphasis on product quality, along with the rising number of drug and medical devices launches, is anticipated to contribute towards the expansion of these segments.

Bioburden and sterility testing along with sterilization process validation are crucial aspects of GMP for assuring the safety of the end products. Sterility and bioburden testing are conducted on medical devices or its components to determine the total viable microorganism count prior to the sterilization process, thereby facilitating the growth of these segments.

Based on sample, the global market is segmented into sterile dugs, medical devices, and biologics and therapeutics. The sterile drugs held the largest market share in 2016 due to the high adoption of several techniques adopted for product safety.

The biologic and therapeutics segment would witness a remunerative growth over the forecast period. This is attributed to the factors such as growing number of technological advancements in sterility testing procedures, biosimilars, vaccines, and other biologics along with regulatory mandates to ensure the sterility of biologics & therapeutics.

This can be attributed to increasing harmonization of the regulatory standards with the ICH standards in developing nations. Moreover, many emerging economies in the region are undertaking various initiatives to boost the domestic pharmaceutical market and are encouraging multinational companies to set up operations in the region. Such initiatives are likely to contribute towards the regional development.

The global market is characterized by the presence of a large number of global and domestic companies. The market is also fragmented due to the presence of contract service providers and research laboratories.

This report forecasts revenue growth at global, regional, and country levels and provides an analysis of the latest industry trends in each of the sub-segments from 2014 to 2025. For the purpose of this study, Grand View Research has segmented the global pharmaceutical sterility testing market report on the basis of type, test type, end-use, sample, and region:

How big is the pharmaceutical sterility testing market?

What is the pharmaceutical sterility testing market growth?

b. North America dominated the Pharmaceutical sterility testing market with a share of 49.7% in 2019. This is attributed to the increasing number of pharmaceutical industries within the U.S. and Canada and an increasing presence of the number of major market players this region is expected to contribute significantly to the market growth.

Who are the key players in pharmaceutical sterility testing market?

What are the factors driving the pharmaceutical sterility testing market?

b. Key factors that are driving the market growth include supportive government investments in healthcare industry, increasing R&D activities, increasing number of drug launches, and increasing focus on quality and sterility.