The global polyphenylene sulfide (PPS) market size was estimated at USD 1.19 billion in 2018. It is anticipated to grow at a CAGR of 8.8% during the forecast period. Polyphenylene sulfide is a crystalline polymer, whose high chemical resistance and temperature performance among other properties are projected to fuel the demand over the next few years. 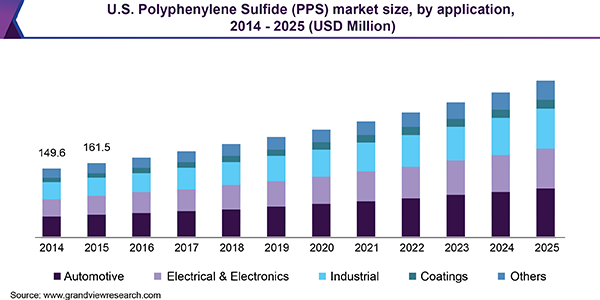 Automotive and electronics and electrical were the prominent application segments in 2018. PPS has a vast scope of application scope within the automotive industry resulting in the increased demand from automotive manufacturing countries such as India, China, and Japan. The segment is also likely to exhibit the fastest CAGR owing to the growing need for lightweight and higher stability in automobiles.

Polyphenylene sulfide finds application in aerospace and defense. PPS composites have been used for making rudders and elevation in the Gulfstream G650 business jet in the past. They are projected to find greater use in airplane manufacturing with the increasing use of composites for manufacturing airplanes such as the Airbus A380 and Boeing 787 Dreamliner, which use up to 50% of composites in the primary structure including fuselage and wing.

PPS market size is anticipated to witness significant growth over the next eight years owing to increasing demand from various sectors including automotive, electronics, industrial, and aerospace. Rising consumption of the compound in high-temperature applications owing to superior performance and mechanical characteristics is projected to drive the market over the next few years.

Polyphenylene sulfide is 100% recyclable, increases fuel economy, and reduces emission levels. All these factors are likely to drive the product demand from different end-use industries. A high preference for PPS over metals owing to weight reduction is likely to further propel the demand. However, the presence of substitutes including PEEK and PEI along with fluctuating raw material costs is projected to challenge growth over the next eight years.

The use of PPS in automobile parts and as filter bags in coal-fired power plants is anticipated to witness growth in the near future. The automotive industry is likely to witness robust growth in countries such as India, China, and Brazil. The need for lower emissions and higher fuel economy has resulted in an increased focus on reducing the weight of automobiles. Companies are looking for polymer replacements for metal parts, which are projected to augment the consumption of PPS over the next few years.

PPS is increasingly being used in the automobile industry as it provides benefits in terms of resistance to fuel, transmission and brake fluids, antifreeze, and high temperature. It also provides weight reduction and increased stability as compared to a full metal framework and finds applications in several automotive parts such as IC regulators & rectifiers, coolant circuits, brakes, fuel pump parts, sensors, motor insulators, and gaskets.

The aerospace industry in the U.S. is projected to grow with increasing commercial flying owing to the increase in passenger travel demand. The accelerated replacement cycle of obsolete aircraft with next-generation fuel-efficient aircraft is expected to propel the commercial aerospace sector in the country. The presence of industry giants including Boeing and Airbus is expected to drive market growth.

Stringent environmental regulations are forcing the automotive industry to improve fuel efficiency, reduce maintenance needs, and lower noise levels. The presence of stringent measures is, therefore, expected to drive the need for lower vehicle weight so as to achieve all these factors.

PEEK is expected to enter the diverse market and explore opportunities in unexploited markets on account of its environment-friendly characteristics including lower harmful radiation over the forecast period. In addition, the increasing demand for PEI composites in numerous aircraft structures, including Airbus floor panels, Gulfstream rudder ribs, pressure bulkheads, and various parts is expected to augment the demand for PE. Increasing demand for substitutes is expected to restrict the PPS market growth over the forecast period.

Fluctuation in crude oil production and the unavailability of reserves in the world are likely to affect the supply of hydrogen sulfide in the market. Sodium sulfide, which is a key raw material used to produce PPS is produced by reducing sodium sulfate with carbon. Sodium sulfide is mainly produced in China, thereby creating unavailability in other parts of the world, which in turn is likely to restrict its supply for PPS production. These aforementioned factors are expected to restrain PPS market penetration in the near future.

Polyphenylene sulfide is used in fuel system parts, engine components, power trains, brake systems, transmissions, lighting, and electrical applications. It is employed in parts that could be exposed to high temperatures or corrosion. The expansion of road networks in the Asia Pacific and the commitment of the regional governments toward industrial and infrastructural development are projected to boost vehicle sales and thus have a favorable impact on the Polyphenylene Sulfide (PPS) market over the next few years.

The growing requirement for weight reduction in cars to improve their efficiency and reduce emissions has resulted in the need to replace heavy metal parts with lighter polymers. PPS is a preferred polymer in automotive applications due to its superior properties including creep resistance, stiffness, strength, and temperature resistance. Luxury brands such as Mercedes-Benz have been using polyphenylene sulfide for their engine components to reduce weight and improve overall stability.

Coatings are used to protect ferrous parts in chemical and construction industries from corrosion. Polyphenylene sulfide coatings can be applied using methods such as slurry coating, electrostatic coating on cold or hot surfaces, powder flocking, or fluidized bed coating. However, these techniques require subsequent oven curing, leading to the coatings being exposed to temperatures in the range of 300 °C to 3700 °C. This process limits the use of PPS coatings on large surfaces since they cannot be accommodated in the oven.

Asia-Pacific dominated the polyphenylene sulfide market and accounted for the largest revenue share of 55.0% in 2019 The region is anticipated to continue its dominance over the forecast period. This growth can be attributed to a rapid increase in automobile giants including Toyota Motors, Honda Automobile, Nissan Motors, Hino Motors, and General Motors is expected to stimulate industry expansion.

Rapid growth in the automotive industry in China on account of modernization along with high demand for SUVs and sedans is expected to propel market growth. Development in the aerospace sector due to the increase in the number of manufacturers in China including Shenyang Chengdu, Shanghai, Jiangxi, and Xi’an is further expected to drive the market over the forecast period. 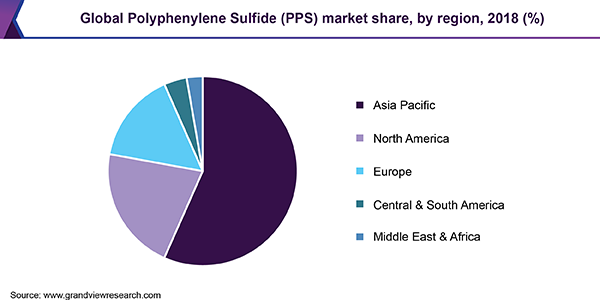 The automobile industry in Germany is one of the biggest industries in the country and produces more than 6 million vehicles including passenger and commercial vehicles every year. In addition, Germany is also a leader in producing passenger cars among all member countries in the European Union. The German automotive industry accounts for more than 29% of the total Europe automobile market share. The growing automotive industry of Germany is expected to promote market growth in the future.

Demand for PPS in North America is predicted to rise due to its use in air and waste management. In addition, the burgeoning automotive sector is expected to fuel the demand for PPS in the U.S. The Corporate Average Fuel Economy (CAFE) standards are impelling automotive manufacturers to examine materials that are not only lighter but also less expensive than metal.

High to moderate entry barriers, as a result of the difficulty in registration and large capital investment, are anticipated to assert high competition among major manufacturers. Moreover, the industrial rivalry is projected to stay high as a result of distinguished alternatives for produced goods as well as the swift industrial growth in the forthcoming years.

Rising demand for the product as a result of its high resistance to corrosion, temperature, chemical, wear, and radiation will fuel its demand. The market is identified by activities, such as capacity expansions, acquisitions and mergers, and product and technological innovations attempted by the key manufacturers, such as Toray Industries, SK Chemicals, Solvay, Kureha Corporation, DIC, and Polyplastics Co., Ltd.

Big companies are increasing their geographical presence to obtain maximum market share. The establishment of strategic partnerships with buyers to build new products is projected to remain a critical success factor over the next few years. Taking into account all the above factors, manufacturers are likely to focus on product innovation catering, particularly to the electric and electronic equipment, home appliances, and automotive components.

This report forecasts revenue growth at global, regional, and country levels and provides an analysis of the latest industry trends in each of the sub-segments from 2014 to 2025. For the purpose of this study, Grand View Research has segmented the global Polyphenylene Sulfide market report on the basis of application and region: