The global PV inverter market size was valued at USD 8.4 billion in 2019 and is expected to grow at a compound annual growth rate (CAGR) of 5.6% from 2020 to 2027. Increasing demand for renewable energy due to high power consumption along with a reduction in renewable power generation costs is expected to drive the market growth in the coming years. Renewable power generation cost has witnessed a very steep decline and is now competitive to meet the need for new capacity. Solar photovoltaics have resulted in a significant decrease in the Levelized Cost of Electricity (LCOE). This fall in the prices of power generation came with the reduction of installation costs for solar modules, inverters, and related equipment. This trend is expected to positively influence product demand. 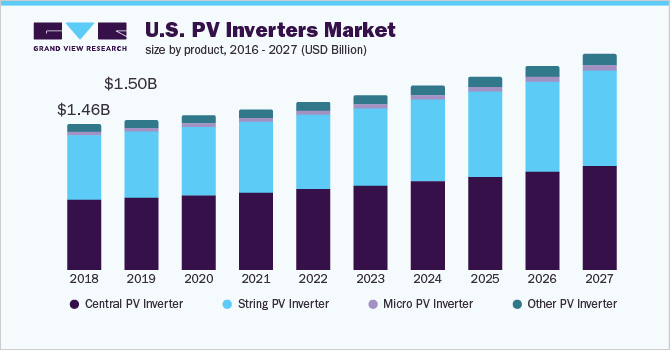 China is expected to be a dominant regional market for the solar sector and related equipment including solar inverters. The inverter companies in China occupy prominent shares in the domestic market, with the majority of the shipments heading towards the utility-scale sector of the country. Some of the key manufacturers involved in these shipments include Kstar New Energy, Huawei Technologies Co., Ltd., Sungrow, CHINT Group, and Sineng Electric Co., Ltd.

The value chain of solar inverters is considerably complex and comprises component manufacturers, inverter manufactures, distributors, sellers, and end-users. Different components of the solar value chain account for different revenue generation, such as the significant portion constitutes of panels followed by inverters and batteries. The value chain complexity includes little room for technical differentiation of solar devices as the efficiency of these devices is already relatively high.

Solar PV inverters are subjected to numerous safety certifications, manufacturing, and grid interconnection certifications. The regulatory compliance reflects in all equipment segments of the solar PV industry, especially the U.S. PV industry. The increased demand for solar equipment has put immense pressure on testing organizations, such as Underwriters Laboratories, to ensure inverter safety and keep pace with the technological changes.

The solar PV inverter market has witnessed exceptionally high growth, in terms of capacity installations, but the global market is anticipated to be substantially impacted by the anti-dumping tariffs. Several countries have implemented anti-dumping tariffs on imports of solar products, which are comparatively cheaper than the domestic market. Such duties have been levied on account of price deterioration that has hampered the domestic market for the solar equipment.

Central PV inverter segment occupied a dominant market share of over 49% in 2019 owing to the wide usage of these systems in large industrial-scale applications. These inverters are highly reliable with timely maintenance. They are integrated with large arrays installed on field installations, industrial facilities, and buildings, taking DC power from all the PV panels and converting into AC power becoming a single point for power distribution.

String inverter segment occupied the second-largest market share in 2019 and will expand further at a steady CAGR from 2020 to 2027. Lower initial costs and easy installation are among the primary factors responsible for the segment growth. These systems are mainly used in commercial and residential sectors. These products are robust, highly efficient, and well-supported (with trusted brands). Moreover, they offer high design flexibility, three-phase variations, and have remote system monitoring capabilities.

THE micro PV inverters segment is projected to witness a substantial growth rate over the forecast period. These systems are module-level electronics and have become a popular choice for commercial and industrial sectors. These products are cost-effective, easy to install, have the advantage of high reliability, and offer increased efficiency & performance through Maximum Power Point Tracker (MPPT).

The utility segment emerged as the largest and fastest-growing in 2019 and accounted for over 43% of the global market share. It is projected to retain its leading position through the forecast years mainly due to increased solar renewable energy demand, declining costs of solar power & equipment, and increasing government subsidies. Several key players provide consumers with industry-leading utility-scale solutions to achieve higher efficiency and reduced balance-of-system costs with their pre-integrated power stations.

The residential end-use segment is expected to witness significant growth over the forecast period on account of increased demand for solar renewable energy among the consumers for electrification purposes, home appliances, and other applications. The residential solar market has also witnessed profitability and value due to solar loans, which have become a key consumer finance solution for the particular end-use segment. Currently, many of the solar loan products coupled with the leasing of system owners have enhanced the overall profitability. 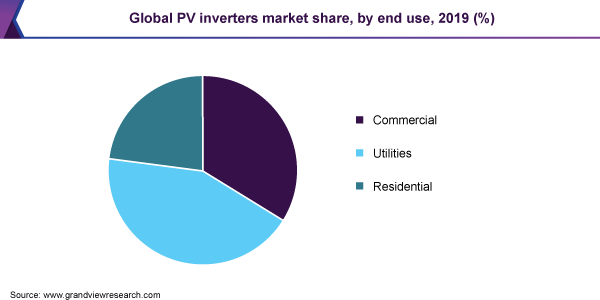 The commercial & industrial end-use segment will have a considerable CAGR over the forecast period. This is primarily due to the increasing procurement of large off-site projects that allow companies to offset a bigger portion of their electricity use, which has been of growing significance for tech-firms, such as Facebook, Microsoft, Apple, and Amazon Web Services.

Asia Pacific regional market accounted for the largest market share of 42.2% in 2019 and is estimated to expand further at the fastest CAGR over the forecast period. China is the major contributor to the rapid growth of the solar market in APAC and is also a global competitor. A growing number of solar installations in the developing nations of APAC have also significantly contributed to the market growth.

North America occupied the second-largest market share in 2019, with the U.S. being the major revenue-generator. The U.S. is a prominent market for different types of PV inverters. Some of the recent inverter trends in the country include dominance of 60 kW plus capacity three-phase string inverters and 1.5 MW plus capacity central inverters. Though North America witnessed sturdy growth for string inverters, the central PV inverters are expected to maintain the majority market share over the forecast period.

Europe is expected to account for a prominent market share over the forecast period owing to the presence of favorable government policies and the provision of subsidies, such as residential Feed-In Tariffs (FITs), which encourage customers to invest in renewable energy. Germany holds a leading position in the manufacturing of solar inverters in tandem with the hi-tech nature of the inverters. German solar companies thus pose a competitive advantage over other players. The country is also a hub to many significant PV inverter players in the market.

The global market is highly competitive and consolidated due to the presence of a large number of companies. The dominant trend in the operations of these companies includes vertical integration, which defends against the market power and reduces competition. Technology sourcing, skilled manpower, and strong R&D are among the significant factors governing the competitiveness of the industry. Some of the prominent players in the PV inverter market include:

This report forecasts revenue growth at global, regional, and country levels and provides an analysis of the latest industry trends in each of the sub-segments from 2016 to 2027. For the purpose of this study, Grand View Research has segmented the global PV inverter market report on the basis of product, end-use, and region: