The rolling stock market was valued at USD 56,716.9 million in 2018 and is estimated to grow significantly with a CAGR of 4.2% over the next six years. Rolling stock has facilitated easy transportation between various destinations with benefits such as cost-effectiveness, reliability, and comfortability. Thus, the demand for rolling stock has been increasing over the past few years and is expected to moderately increase over the forecast period. The growing concertation of the population in urban areas is expected to increase the demand for rail vehicles such as trams, local trains, passenger rails, and so on. Moreover, travelers are preferring high-speed trains over the conventional trains owing to faster transportation and comfortability. Thus, numerous governments are making investments in tramways and commuter trains to enhance the adoption of passenger rails. 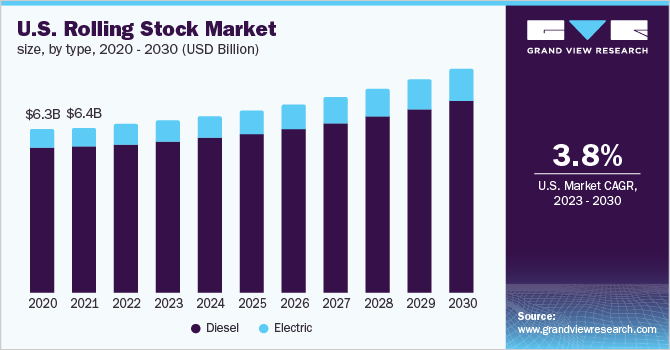 Several countries are expanding their rail infrastructure due to the increasing population and rapid urbanization. Rail transportation is economical, faster, and well-suited for carrying heavy or bulky goods over long distances. Moreover, passengers prefer rail transportation owing to reduced traffic and resistance against changing weather conditions, as compared to road transportation. However, high capital investment for the implementation of the railway infrastructure, based on parameters such as load capacity, train length, and speed, is restraining the market growth.

The use of specialized lightweight components in rail vehicles is a prime requirement to improve fuel efficiency and reliability of rail vehicles. Manufacturers are employing the latest and advanced technologies to manufacture the vehicles. Numerous companies are focusing on the implementation of regenerative braking technology in locomotives. The technology facilitates energy-saving and reduces the need for mechanical brakes, which further increases the efficiency of vehicles.

Locomotives are being used to haul a myriad of goods such as oil, agriculture products, and construction equipment, among others. Several industries such as oil & gas, manufacturing, automotive, and mining are benefiting from the cost benefits offered by rolling stock.

Various governments are introducing stringent standards and norms for increasing the use of rolling stock. For instance, the Russian industrial rail operators are required to replace their aging locomotives and shunting units with new ones to ensure safety. Such new standards and norms are creating growth opportunities for the manufacturers of the rolling stock market.

Numerous industries are adopting rail wagons for transportation of goods as they are economical and reliable. Currently, many companies and governments of various countries are making considerable investments to replace their existing rolling stock. Car carrier wagons, flat wagons, hopper wagons, and tank wagons, among others, are the most commonly used wagon types for transporting goods.

Diesel vehicles are commonly used for the transportation of heavy goods in most of the regions. They are widely used among industries such as oil & gas, mining, and manufacturing for transportation of goods owing to their features such as cost-effectiveness and high-torque engines. Manufacturers such as CRRC Corporation Limited, Bombardier Transportation, and Alstom Transport are developing turbocharged diesel vehicles to cater to the increasing demand for advanced rail vehicles.

The electric vehicles segment is expected to be the fastest-growing segment owing to benefits such as reduced pollution and enhanced efficiency of the vehicles. Electric trains are eco-friendly and emit 20-30% less carbon monoxide as compared to the diesel trains. Moreover, increasing awareness regarding environmental pollution is further encouraging the use of electric vehicles for transportation.

The demand for passenger rails has been constantly increasing globally. Moreover, passenger rails are mass transit systems and hence, are more cost-effective than roadways. Trams, metros, and high-speed trains are the most preferred passenger rails, owing to their faster transportation service. 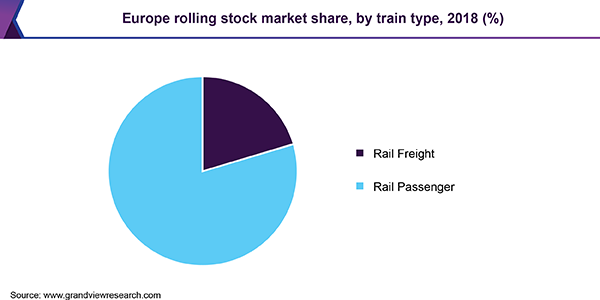 Rail freights are used for transportation of goods to the destination and are a part of the logistics chain. Rail freight has a wide range of applications in the automotive, oil & gas, mining, and construction industries. Additionally, the implementation of GPS tracking systems and the integration of intelligent systems have improved the quality of these vehicles.

The Asia Pacific region is estimated to dominate the rolling stock market over the forecast period owing to the large-scale adoption of rail vehicles for transporting passengers and goods. Moreover, the growth of the regional market can also be attributed to the increase in investments in metro and electric trains in countries such as China, India, Taiwan, and others.

The market is consolidated due to increased mergers and acquisitions. In June 2015, CNR and CSR merged to form CRRC, a leading player in the rolling stock market. Moreover, CRRC is also the leading player in new vehicle segments such as high-speed trains, metro cars, electric locomotives, and diesel locomotives. The key players have employed innovative concepts & ideas and improved manufacturing techniques for enhancing their product portfolios.

This report forecasts revenue growth at global and regional levels and analyzes the industry trends in each of the sub-segments from 2014 to 2025. For this study, Grand View Research has segmented the global rolling stock market report based on the product, type, train type, and region: