The need to combat rising labor costs in developed nations and growing instances of assisted living are expected to give impetus to the global service robotics market. Since they help perform tasks that would otherwise be deemed risky or difficult, service robots are expected to witness growing demand.

In addition, mundane everyday tasks can be easily handled with a high degree of accuracy by these computer-controlled devices. However, service robotics are in proximity to humans; therefore, ensuring complete security and safety is of the utmost importance. An increasing number of companies have been developing and honing automation techniques in order to gain market share. Major components involved in service robotics include sensors, microcontrollers, power supply, actuators, and manipulators, of which sensors are the most critical. 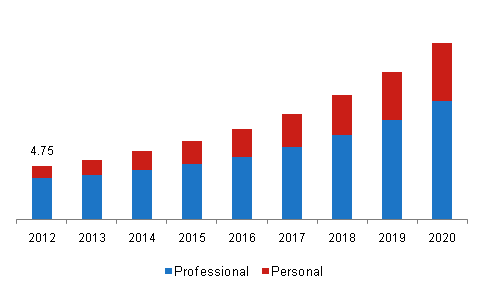 Technology proliferation and innovation are expected to serve as a key driver for the market growth as a result of which the price for service robotics is expected to see a fall. In addition, an aging population, mobile technology, and other smart devices incorporating robotics, funds, and favorable government grants, enhancement of complementary technologies, and venture capital investments among others are expected to impact positively the market demand. In recent times, the use of service robotics in the automotive industry is also expected to spur market growth. However, human safety, interaction with the unstructured real world, and lack of sensors, network robots, and users are likely to restrain the market growth.

The personal service robotics applications comprise two basic applications and include household robots and entertainment and leisure robots. Personal service robotics accounted for a much smaller revenue share as compared to their counterparts and have very different marketing and pricing channels. Personal robots are used for handicap assistance, lawn mowing, entertainment, education, and research, etc. Systems used for surveillance and home security are expected to witness growth in the coming years due to increasing concerns among end-users.

Asia-Pacific is expected to remain the market leader, primarily on account of significant developments in Japan and South Korea. The U.S. is also expected to occupy significant market share and grow faster than the global average during the forecast period. Rapid increase in industrialization and development of production capacities in the North America region is likely to accelerate the growth of the service robotics market. In addition, the booming automotive industry is expected to drive the market growth in regions including North America and Asia Pacific. The demand for service robotics is expected to rise in developing economies including India, China among others owing to rise in manufacturing and production bases.