The global smoke evacuation systems market size was valued at USD 162.5 million in 2020 and is expected to expand at a compound annual growth rate (CAGR) of 7.4% from 2021 to 2028. An increasing number of electrosurgery procedures, medical tourism for cosmetic surgeries, and product availability are anticipated to drive the market. According to ASPS, in 2018, about 18 million people underwent surgeries in the U.S., inclusive of minimally invasive procedures. It is also observed that the number of minimally invasive cosmetic procedures increased in 2018. 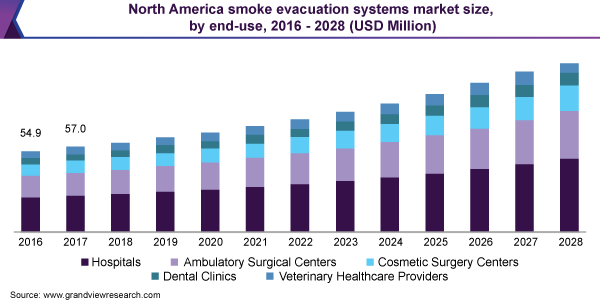 Smoke evacuation and filtering systems are not mandatory during laparoscopic surgeries, according to National Institute for Occupational Safety and Health Administration. However, with the COVID-19 pandemic, major concerns have been raised regarding Aerosol-generating Procedures (AGPs), including laparoscopy. It has been observed that the SARS-CoV-2 virus has the ability to remain in the aerosols for up to 3 hours. Thus, effective measures for the evacuation of smoke and aerosols must be taken near infected patients and/or during AGPs to significantly reduce the risk of transmission. This has heightened the need for the smoke evacuation system, thereby fueling market growth in the near future.

Developing countries such as China, Thailand, India, Brazil, and Mexico are constantly improving their healthcare infrastructure to provide treatments/surgeries at lower costs, such as cosmetic surgeries and dental care programs, boosting medical tourism in these countries. Some of the most common procedures performed in these countries are breast augmentation, rhinoplasty, abdominoplasty, rhytidectomy, and liposuction.

Furthermore, smoke evacuation platforms are effectively being combined with electrosurgical generators are known to produce a substantial amount of surgical smoke plume. This is expected to help streamline the surgical workflow. Thus, the availability of innovative products is likely to drive market growth during the forecast period.

Collaborations, partnerships, acquisitions, and product approvals and launches have significantly impacted the market in recent years. Furthermore, there has been a significant increase in the demand for smoke evacuation systems due to its increasing awareness which in turn is fueling the market growth.

The smoke evacuation filters segment is expected to hold the second-largest market share owing to their applications in cauterizing vessels and vaporizing blood, tissues, and fluid created as smoke, a byproduct of laser surgeries and electrosurgeries. The segment is further classified into ULPA filters, charcoal filters, in-line filters, and pre-filters. The ULPA is highly effective and can filter nearly 100% and up to 120 nanometers in size, however, 0.001% of airborne particles remain unfiltered, which boosts its market growth.

The hospitals' segment dominated the market and accounted for the largest revenue share of 42.9% in 2020. This segment is expected to hold the largest market share during the forecast period owing to the high number of surgeries being performed such as cosmetic and orthopedic surgeries. According to Occupational Health and Safety Administration, approximately 500,000 workers are exposed to laser or electrosurgical smoke each year. 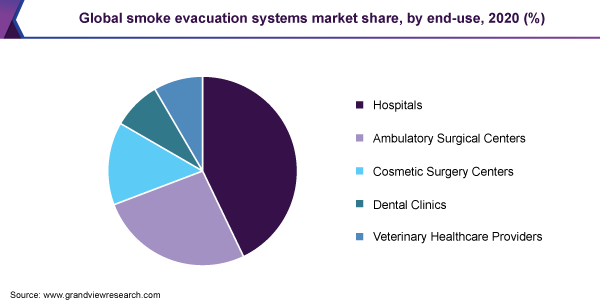 On the other hand, the cosmetic surgery centers segment is estimated to register the fastest CAGR of around 7.7% owing to the rise in the number of cosmetic laser surgeries, which produce smoke.

North America dominated the market and accounted for the largest revenue share of more than 40.0% in 2020. This is because a high number of aesthetic surgeries are being performed such as Botox, wherein laser treatment is used, which causes smoke plumes during surgery. Europe is anticipated to be the second-largest market for smoke evacuation system owing to the presence of sophisticated healthcare infrastructure and availability of advanced products and skilled professionals.

Asia Pacific region is expected to witness the fastest CAGR of 9.7% owing to high investments in R&D and consistent efforts being taken by global market players for commercializing their products at lower prices. The Latin American region is expected to grow owing to increasing reforms in the healthcare industry in this region. Moreover, healthcare organizations are also undertaking initiatives to improve healthcare facilities in the Middle East and African countries, thereby driving the market in the region.

The market leaders are involved in acquisitions, strategic collaborations, and new product launches to withstand the competition. Major market players are investing in acquisitions and launching new products to enhance their position in the market. For instance, in May 2020, KLS Martin Group acquired major business operations of Stuckenbrock Medizintechnik. This strategy focused on expanding the OEM operations of the company. Some of the prominent players in the smoke evacuation systems market include:

This report forecasts revenue growth at global, regional, and country levels and provides an analysis of the latest industry trends in each of the sub-segments from 2016 to 2028. For the purpose of this study, Grand View Research has segmented the global smoke evacuation systems market report on the basis of product, application, end-use, and region:

How big is the smoke evacuation systems market?

What is the smoke evacuation systems market growth?

b. North America dominated the smoke evacuation systems market with a share of 40% in 2019. This is attributable to increased cases of laparoscopic as well as aesthetic surgeries such as Botox, where the usage of laser treatment results in smoke plumes during the surgery.

Who are the key players in the smoke evacuation systems market?

What are the factors driving the smoke evacuation systems market?

b. Key factors that are driving the smoke evacuation systems market growth include the increasing number of laparoscopic and cosmetic surgeries, health hazard concerns for healthcare professionals, and supportive government initiatives.