The global market for smoking cessation and the nicotine de-addiction market was valued at over USD 7.0 billion in 2015. The key driving factor for the market growth is the increasing prevalence of a plethora of target diseases such as respiratory disorders, cardiac diseases, and lung cancer stemming from smoking.

The introduction of new nicotine replacement products that aim to relieve nicotine cravings and; hence, aid in reducing the urge to smoke is also estimated to enhance penetration rates of these products. Novel products with improved flavor and minimal side-effects that serve as nicotine replacement therapy include various nicotine chewing gums in different flavors, such as fresh mint, ice mint, and fresh fruit. 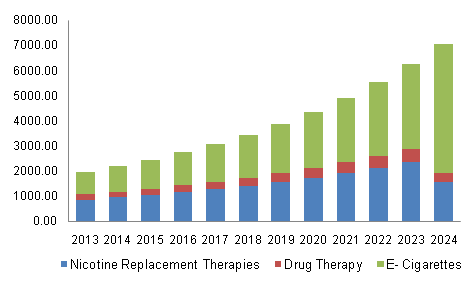 The government initiatives undertaken to implement the anti-smoking policy and to spread awareness regarding the health complications associated with smoking are further anticipated to promote market growth. The WHO has initiated a program named ‘Tobacco Free Initiative’, which includes the implementation of plain packaging, targeted at reducing the attractiveness of the product, and the screening of documentaries and videos that inform the public at large about the hazards of smoking.

The NRT segment comprises sprays, inhalers, chewing gums, transdermal patches, lozenges, and sublingual tablets. This segment held the largest market share in 2015 with revenue of over USD 3,000million owing to its ease of use, its increased accessibility, and its effectiveness in reducing the nicotine craving in smokers.

Medication for smokers is administered with an objective to address the withdrawal symptoms that are experienced upon the discontinuance of tobacco smoking; drug therapy includes drugs such as Varenicline, Zyban, and Nicorette Buccal. Varenicline, a non-nicotine based drug that has been proven to be effective in assisting smoking cessation is marketed as Chantix in the U.S. and Champixin other parts of the globe. Zyban is another widely used drug, used in combination with NRT for effective results.

E-cigarettes are considered as a healthy alternative to tobacco cigarettes and is estimated to be the fastest-growing segment with a CAGR of over 19% over the forecast period. The increasing popularity of e-cigarettes backed by its electronic feature is considered to be the major factor contributing to its increasing demand. For instance, e-cigarette products with a convenient rechargeable feature are now being manufactured by companies such as NJOY. Some of the key players manufacturing e-cigarettes include NJOY, VMR products, LLC, Lorillard, Inc., and VaporCorp.

North America dominated the smoking cessation and nicotine de-addiction market with revenue generated over USD 2,600 million in 2015. This large market share is attributed to the established healthcare infrastructure and the rising disposable income.

The Asia Pacific region is expected to witness lucrative growth with a CAGR of around 13.9% over the forecast period. The high economic growth, opportunities owing to geographical business expansions, largely untapped market opportunities, and the presence of a large base of the target population are the major factors contributing to the market growth in this region.

Governments levy taxes such as Value Added Tax (VAT), excise taxes or general sales tax on tobacco products. This raises the prices of tobacco and its related products, which in turn helps to reduce tobacco consumption. For instance, in October 2015, the WHO initiated the ‘national smoke-free law’ in the Asia Pacific region to reduce the number of active smokers and; hence, reduce the exposure to the risk factors associated with smoking.

The companies in this industry are undertaking mergers, acquisitions, and collaborations in an attempt to strengthen their market position. For instance, Takeda Pharmaceutical Company Ltd. holds an exclusive distribution right for Johnson & Johnson’s non-prescription drug, Nicorette in Japan. Moreover, in June 2013, Revolymer plc signed an agreement with PL Developments, Inc., a U.S.-based pharmaceutical distributor with an objective to expand their product portfolio in the U.S.

The introduction of novel products with an aim to sustain their market share is another key strategy implemented by the key players. In January 2015, McNeil introduced a new product in Germany named QuickMist, which is a fast-acting nicotine spray that replaces tobacco and supports smoking cessation.