The global snus market size was valued at USD 2.41 billion in 2019 and is expected to grow at a compound annual growth rate (CAGR) of 5.5% from 2020 to 2027. The growing popularity of snus owing to the convenience of the application it offers to its consumers is a key factor driving the market. The ease of using the product anywhere unlike cigarettes, which cannot be smoked in public and no smoking zones owing to the harmful effects of combustion, has been playing a crucial role in promoting the usage of snus. 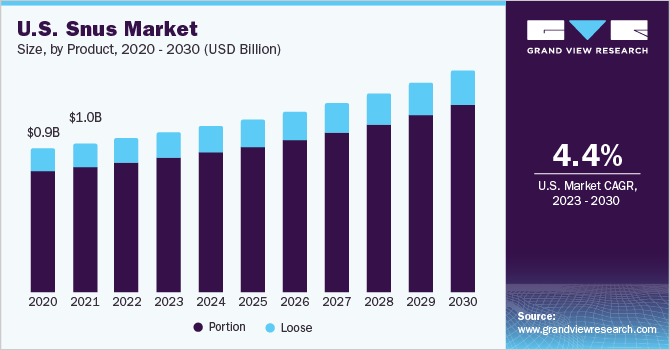 Moreover, it is much more convenient in use as compared to dip tobacco as the by-product is swallowed rather than being spit out. These favorable factors associated with snus products have made it a convenient replacement for tobacco products, such as cigarettes, cigars, and smoke pipes.

The low rate of oral, lung, and pancreatic cancers and respiratory diseases associated with the use of the product is a major reason for its adoption among tobacco addicts. In the process of manufacturing snus, the tobacco is steam pasteurized and not fermented like other types of smokeless tobacco. This inhibits the growth of microbes that form a cancer-causing chemical known as tobacco-specific nitrosamines, which is commonly found in other smokeless tobacco products.

Snus is also less harmful compared to inhaling nicotine through combustible tobacco products. According to a research published by the International Journal of Cancer named “Use of moist oral snuff (snus) and pancreatic cancer”, in 2017, it was concluded that there was no relation between snus use and risk of pancreatic cancer as the nitrosamine level is low in snus than in tobacco smoke.

Growing popularity has stimulated the manufacturers to create flavored products, including mint, eucalyptus, berries, fruits, licorice, whiskey, spices, bergamot, cedar, citrus, dry fruit, hay, leather, smoky, tea, and tobacco. Among these, the more popular flavors including mint, berries, and fruits are further available in different subcategories of flavors. For instance, mint snus can be found in variants including spearmint, wintergreen, and menthol.

Tobacco-free snus is another product that has been gaining massive adoption. The manufacturers have been creating tobacco-free alternatives to keep the product prevalent in the global market, wherein the consumption of tobacco has been reducing consistently. The product is helpful for people trying to quit or reduce their tobacco consumption. These contain a blend of herbs and flavors that together create an experience similar to the regular snus and there are a wide range of brands and flavors. Some of the major companies are Choice, Grinds, KickUp, Onico, Qvit, and Jakobsson’s Tobacco and Nicotine Free.

Portion led the market and accounted for more than 80% share of the global revenue in 2019. Portions are made by packing tobacco in pouches. They are available in various forms, including original, white, dry white, all white, and others. The original portion is dark in color and is packed in moist surface and it delivers an instant flavor and nicotine release. 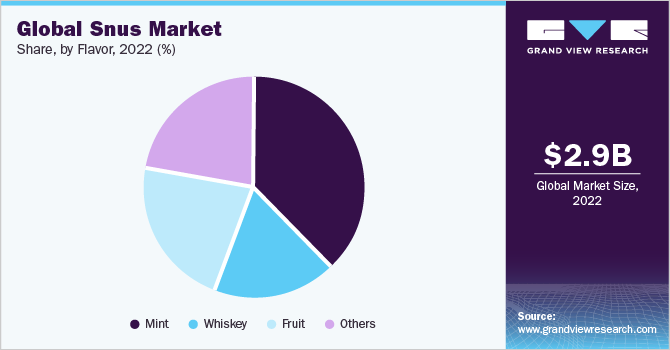 The white portions are not moistened during manufacturing and therefore offer less drip, thereby causing low salivation and a longer-lasting nicotine release. The product is expected to witness the fastest growth in the years to come. The portion snus is available in various sizes, including large, slim, super slim, and mini, which weigh less than a gram.

Europe accounted for the largest market, accounting for more than 40% of the global revenue in 2019. Strong popularity of such products among male consumers in Scandinavian countries such as Norway and Sweden is expected to remain a favorable factor for the industry. Furthermore, the increased number of new product launches in aforementioned countries is projected to keep the dominance of the region over the next few years.

Middle East and Africa is expected to expand at the fastest CAGR of 9.3% from 2020 to 2027. The region has the least regulations related to the sale of tobaccos. It is known as makla in Africa. Snus is not banned in any African country. More and more international and national agencies are trying to reduce the number of smokers in the region. These products have been proved to be helpful in getting rid of smoking addiction and therefore these are rapidly adopted in the region. Furthermore, these products are affordable and thus are increasingly preferred among the buyers.

Advertisement for tobacco has been banned in most countries. In October 2019, the FDA allowed a tobacco company to advertise products as less harmful than smoking cigarettes. FDA found that snus is often used to get rid of cigarette addictions, and thus has approved the advertisement of these products.

New product launches are expected to remain one of the key strategies among market players over the next few years. In 2019, Swedish Match launched new snus variants such as XR Göteborgs Rapé Sparkling Slim White. Furthermore, the company repositioned snus products under the brand name, General Onyx, with a distinctive feature from the onyx black pouches. These new product launches are expected to increase the market share of Swedish Match over the next few years. Some of the prominent players in the snus market include:

This report forecasts revenue growth at the global, regional, and country levels and provides an analysis on the latest industry trends and opportunities in each of the sub-segments from 2016 to 2027. For the purpose of this study, Grand View Research has segmented the global snus market report on the basis of product and region:

How big is the snus market?

What is snus market growth?

Which segment accounted for the largest snus market share?

b. Europe dominated the snus market with a share of more than 40% in 2019. This is attributed to the strong popularity of snus among the consumers of Scandinavian countries including Sweden and Norway.

Who are the key players in the snus market?

What are the factors driving the snus market?

b. Key factors that are driving the snus market growth include the product's convenience of application to its users and ease of using the product.