Software Defined Radio Market Size, Share & Trends Analysis Report By Type, By Component, By Frequency Band, By Platform, By End Use, By Region, And Segment Forecasts, 2022 - 2030 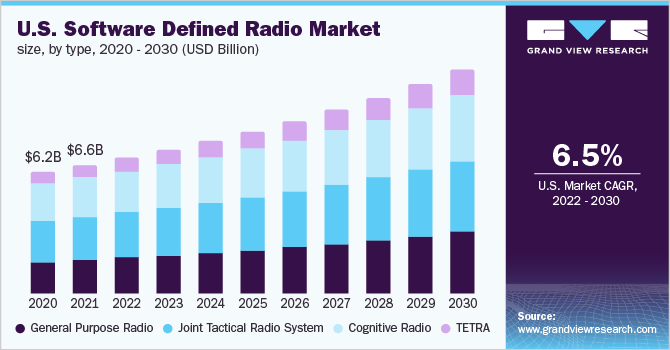 The market for software defined radio benefits from the growing use of IoT and wireless devices. Furthermore, demand for SDRs is expected to rise as the popularity of wireless sensor networks grows. A prominent trend in recent years has been an increase in the spectrum range available for wireless communications. The launch of the 3rd Generation Partnership Project (3GPP) under the telecoms organizational partnership calls for the rapid implementation of commercial wireless technology such as LTE and LTE-Advanced, which drives demand for SDRs. While LTE is now used at frequencies ranging from 450 MHz to 3.8 GHz, it is likely to reach 5 GHz in the near future. Furthermore, software defined radio is employed in radio frequency spectrum analyzers and global positioning systems, among other uses.

Recent changes in RF amplifier technology have resulted in advancements in cellular infrastructure technology. Smartphone designs now can include technologies like a surface acoustic wave (SAW) and bulk acoustic wave (BAW) (BAW). Due to reduced power filter requirements and constrained fractional bandwidth, the pricing component has also narrowed. The development of a software defined radio with hardware and software platform, which is costly, is a downside of employing software defined radio technology. The digital section's peak frequencies may be limited due to the analog to digital conversion.

The COVID-19 epidemic has wreaked havoc on global economic activity. The development of defined radio systems, sub-systems, and components have also contributed to this epidemic. Although software production, characterized by military radio broadcasting, is critical, disruptions in the supply chain have halted production at present. The resumption of production activities depends on the level of exposure to COVID-19, which is the level at which production operations are performed, keeping the export and import regulations in mind, among other factors. There might not be an adjustment to delivery schedules while companies still take orders. Although the pandemic has heavily impacted the market, it is expected to grow steadily due to technological advancements and rapid adaptation.

The Joint Tactical Radio System segment accounted for the largest revenue share of 33.62% in 2021 and is likely to dominate the market over the forecast period. This growth is attributed to incorporating multi-band/multi-mode pre-emptive radio sets that give the warfighter simultaneous speech and data communication capabilities. At the same time, the technology is widely used in the defense industry. JTRS relies heavily on an open systems architecture based on Software Communications Architecture 4.0. The Joint Tactical Radio System (JTSR) initiative of the US Department of Defense is also moving the JTRS market forward.

The Terrestrial trunked radio (TETRA) segment is projected to grow at a significant CAGR of 10.6% from 2022 to 2030. Terrestrial trunked radio (TETRA) is an open digital private mobile radio standard, and it has many features for emergency services and can be used by commercial trunked radio users. TETRA specifies key interfaces such as direct mode operation, air interface, inter-system interface, and terminal equipment to operate efficiently in the multivendor market. TETRA is the world's most significant land mobile radio standard, with good spectrum efficiency and essential communication capabilities like quick call setup time, security, high-speed data services, and voice conversations with direct mode and site trunking.

The hardware segment accounted for the largest revenue share of 41.74% in 2021 and is likely to dominate the market over the forecast period. This growth was noted because of the growing popularity of portable SDRs, The merging of analogue and digital technology on a single chip drives the hardware segment, which is a crucial influence in the weight and size reduction. The expanding popularity of field-programmable gate arrays (FPGAs) with integrated analog-to-digital converters (ADCs) and digital-to-analog converters (DACs) also contributes to the segment's growth.

The service component market is likely to rise significantly with a CAGR of 8.7% during the forecast period. This growth can be attributed to a prominent increased utilisation in commercial applications. SDR's specifications and functions are defined using software. For packet-switched core backhaul, software allows for more flexibility in network load balancing and eliminates capacity bottlenecks. SDR algorithms are downloadable and changeable throughout the radio's existence. This allows the software defined radio market to remain flexible, making it suitable for both commercial and defence applications. A major element driving the software market is its use in applications such as remote radio monitoring, global positioning systems, accessing voice, text messaging, and data information.

The ultra-high frequency market is likely to rise significantly with a CAGR of 9.2% during the forecast period. The potential growth in this segment can be attributed to Commercial applications such as cellular systems and 5G networks using Ultra High Frequency (UHF) bands. UHF SDRs deliver uninterrupted services to customers due to the need for extended area coverage. Furthermore, factors such as the growing number of smartphones and the widespread internet usage for IoT applications are propelling the market forward.

The Ground-based SDR systems accounted for the largest revenue share of 28.66% in 2021. This recorded growth is due to a wide range of tactical military communications systems in the space and defense sectors. In satellite communications, software defined radio optimizes ground station designs and enhances ground station sensitivity by orders of magnitude. The new space communications architecture is shaped by a growth in the number of space projects in the communication sector and the expanding use of SDR technology. Furthermore, the ground-based software defined radio segment is likely to be driven by the adoption of a sophisticated phased array combined with SDR systems over the projection period.

The airborne segment is likely to rise significantly with a CAGR of 9.0% during the forecast period. Airborne SDR is a high-rate data transmission method utilized in military and civilian applications. SDR technology solutions are integrated with current airborne applications by businesses like L3 Harris Technologies and Collins Aerospace, making them secure, cost-effective, and mission-critical. SDRs also include a wideband networked waveform that can be used for secure airborne telecommunications. Over the forecast period, the airborne software defined radio category is likely to be driven by the ability to provide mobile networked connectivity across weapons systems with an efficient signal.

The aerospace and defense segment accounted for the largest revenue share of 24.57% in 2021. The SDR market has been divided into aerospace and defense, communications, public safety, commercial, and others. Because of its broad functional scope, SDR is widely employed in the defense industry. High interoperability, adaptability, precision, speed, and clarity are all device features. Falcon, a leading player, offers a broad deployment of SDR devices for the defense sector supported by SCA 4.0. Countries have been focusing on expanding defense spending in recent years, which has fueled category expansion. 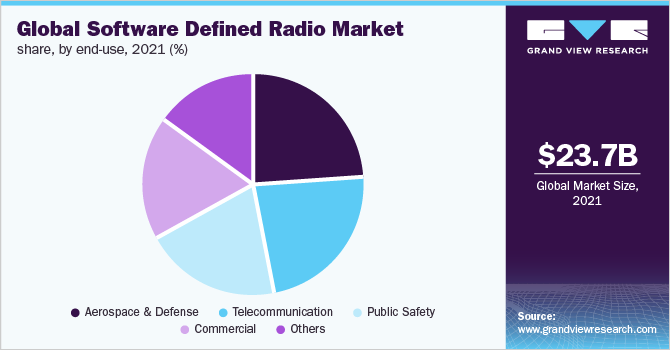 The commercial segment is expected to develop at the fastest rate throughout the projected period, with a CAGR of 9.4%. This growth is because of the increased usage of SDR across industries, including automotive and transportation. Another factor is the rising need for automotive radios to support both analog and digital systems. In the United Kingdom, India, and the United States, software defined radio makes car radios compliant with several digital radio broadcast protocols such as Digital Audio Broadcasting (DAB), Digital Radio Mondiale (DRM), and HD Radio.

The Asia Pacific region is expected to grow at the highest rate of a CAGR of 9.5% from 2018-to 2030. This rise is due to the surge in terrorism in Asian nations such as Pakistan, Bangladesh, and Afghanistan. As a result, regional intelligence and military organizations are progressively implementing SDR to improve communication systems, allowing for safe collaboration, better information sharing, and shared situational analysis. Furthermore, law enforcement's desire for improved communication during natural disasters drives the demand for software defined radio systems. Moreover, government investment in SDR research and development in countries like China and Australia are projected to fuel demand for software defined radio systems throughout the Asia Pacific.

Product launches, acquisitions, mergers, and collaborations are some of the company expansion tactics used by significant companies. Furthermore, space research agencies such as NASA and the European Space Agency focus on the creation of radiation-resistant electronic components that can survive high radiation and are utilized for space signal transmission in software defined radio systems. Following are some of the major players in the global software defined radio market:

This report forecasts revenue growth at global, regional, and country levels and provides an analysis of the latest industry trends in each of the sub-segments from 2018 to 2030. Grand View Research has segmented the global software defined radio market report based on type, component, frequency band, platform, end-use, and region:

How big is the software defined radio market?

What is the software defined radio market growth?

b. North America dominated the software defined radio market with a share of 34.6% in 2021. This is attributable to the Joint Tactical Networking Center (JTNC) program, which provides technical support for wireless communication systems to the U.S. Department of Defense.

Who are the key companies/players in software defined radio market?

What are the factors driving the software defined radio market growth?

b. Key factors driving the software defined radio market growth include an increase in defense spending to upgrade defense communication systems and the growing demand for communication equipment that is more flexible and software programmable.