The global solar control window film market size was USD 505.1 million in 2015 and is projected to grow at a CAGR of 6% from 2016 to 2024. Solar control films are installed on windows in order to protect the interiors of buildings and cars from harmful ultra-violet (UV) rays and infrared radiations (IR). 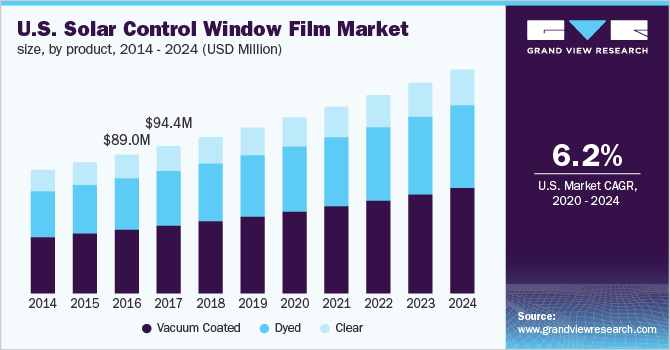 Growing construction industry coupled with superior properties including energy savings and reduction of carbon footprints has contributed to the market growth. Further, stringent regulations regarding energy consumption in commercial buildings have increased the product demand.

Apart from these advantages, it helps in protecting the paint and coatings of rooms and cars which tend to fade away due to the sun-rays. In addition, they provide insulation all through the year. Tropical countries such as Brazil, Mexico, and India particularly are key countries contributing to the product demand due to extreme weather conditions.

The construction segment accounted for the largest share of over 50%, in 2015. Factors such as lenient lending policies and industrialization have played a huge role in the growth of both, residential and commercial construction sectors. This segment is also projected to be the fastest-growing, followed by the automotive segment, over the forecast period. The construction segment is projected to witness a CAGR of 6.2% from 2016 to 2024. According to the Asian Development Bank, the Asia Pacific region is projected to invest between USD 8 trillion to USD 9 trillion in new infrastructure activities from 2010 to 2020, thus, fueling the growth of the construction industry in this region, further boosting the market growth.

The vacuum coated solar control window films held the largest share among all product types in 2015 and is projected to be the fastest-growing product with a CAGR of 6.4% from 2016 to 2024. The metal content in the product reflects the incoming heat and also blocks the harmful UV rays, which cause cancer. These films reflect the largest amount of solar radiation, keeping the interiors cooler, as compared to other films. 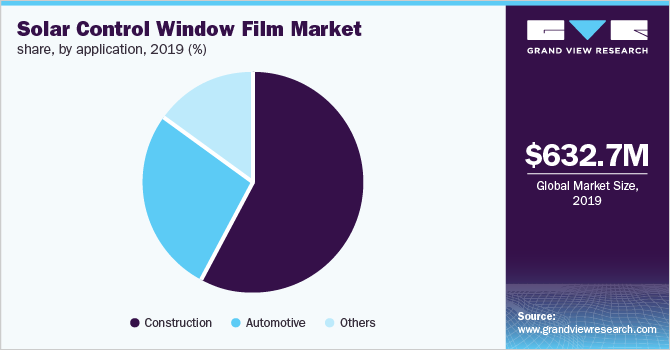 Asia Pacific accounted for the largest share of 34.4% in the global market in 2015. It is projected to be the fastest-growing region courtesy its expanding construction sector. The construction industry in this region is dominated by emerging countries such as India and China. Also, growing automotive industry is expected to drive the demand for solar control window films in this region.

The market for solar control window films is projected to grow at a decent rate in the Middle East & Africa due to growing construction activities. However, a slowdown in the construction sector in Europe has resulted in the sluggish growth of the solar control films market in this region. Some countries in Europe such as Greece and Spain are still reeling under the influence of the economic depression between 2007 and 2009.

The industry is fragmented with the presence of a large number of suppliers and manufacturers. Some of the prominent players include 3M Company (U.S.), Eastman Chemical Company (U.S.), Saint-Gobain (France), Garware Polyester Limited (India). These companies resort to various strategic developments such as mergers & acquisitions, expansions, new product developments, and agreements, collaborations & joint ventures to ensure a wider product portfolio and dense distribution network, thus, increasing their presence in the market.

For instance, in September 2013, Eastman Chemical Company announced the expansion of its window film business by investing USD 40 million between 2013 and 2016 in Henry County, the U.S. In October 2012, SolarGard, a subsidiary of Saint-Gobain, opened a new manufacturing facility in China, for its construction and automotive products segment. This expansion further enhanced the company’s reach in the Chinese market.

How big is the solar control window film market?

What is the solar control window film market growth?

b. Clear window dominated the solar control window film market with a share of 51.1% in 2019. This is attributable to its property to reflect the largest amount of solar radiation, keeping the interiors cooler.

Who are the key players in solar control window film market?

What are the factors driving the solar control window film market?

b. Key factors that are driving the market growth include the property to protect the interiors of buildings and cars from harmful ultra-violet (UV) rays and infrared radiations (IR).