The global solar tracker market size was valued at USD 3.40 billion in 2021 and is expected to expand at a compound annual growth rate (CAGR) of 20.5% from 2022 to 2030. Rising concerns over energy conservation and transition from non-renewable energy to renewable energy are expected to surge the demand for solar energy and eventually solar trackers over the forecast period at the global level. Solar tracker utilizes various electrical components including actuators, motors, and sensors to orient the solar cell for concentrating the sunlight in order to maximize the energy captured. The captured solar radiations are further converted into electricity, which is utilized by various end-user segments. The rising use of solar power as a potential source of commercial energy generation has gained popularity due to the decreasing solar PV panel cost, which is excepted to further augment market growth. 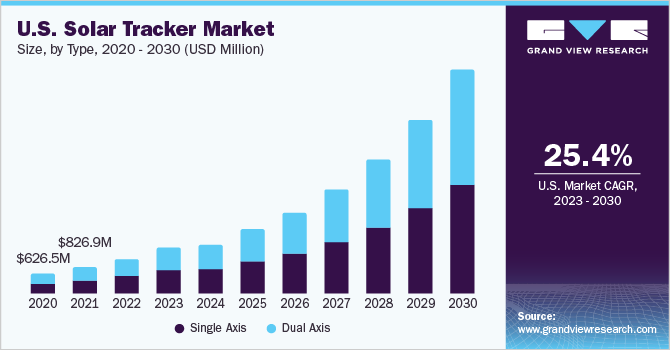 Solar PV technology has been one of the fastest-growing renewable sources of energy over the past few years in the U.S. Increasing government focus on renewable energy has resulted in the development of PV cells as a sustainable and continuous source of energy generation. Rising capacity expansions across the U.S. has led to a decline in the levelized cost of electricity (LCOE). This has made solar PV competitive with other conventional forms of energy in the country. Supporting policies by the U.S. government are responsible for the high implementation of solar energy in the country.

Technological innovations aimed at the development of new methods in tracking systems by companies such as NEXTracker, Array Technologies, AllEarth Renewables, and Solaria are expected to fuel the market growth during the forecast period. The market is price competitive so the solar tracker manufacturers have to be operationally efficient and extremely strategic to be successful.

The market in Europe is expected to witness substantial growth over the forecast period owing to the recent increase in the feed-in tariff (FIT) rates, especially in Germany. The presence of other government subsidies in the region is likely to have a positive impact on the European market over the next ten years. During the FIT boom in Europe, numerous projects employed dual-axis trackers with poor reliability, which led to high O&M costs.

The dual axis segment accounted for the largest revenue share of more than 50.0% in 2021 and is projected to expand at the highest CAGR during the forecast period. Dual axis trackers allow maximum absorption of the sun’s rays on account of their ability to follow the sun both horizontally and vertically. Dual axis trackers help in generating 8% to 10% more energy than single axis trackers. Higher land requirements, complex technology, and high maintenance requirements for motors and control systems result in high O&M expenditure for dual-axis trackers. This factor acts as a major restraint for the wider adoption of dual-axis trackers.

Single axis systems track the sun’s rays along a single axis allowing them to increase system performance by 20% or more over fixed solar PV cells in areas of high isolation. Single axis solar trackers take up more land as compared to fixed solar panels as their movement can create shadows, which can affect the efficiency of neighboring panels. The use of single axis trackers maximizes potential output and they come with higher capex (capital expenditure) and opex (operating expenditure).

Solar Photovoltaic (PV) was the largest technology segment in 2021 and accounted for a revenue share of over 85.0%. The compatibility of PV cells with standard photovoltaic module technologies is the major reason behind the largest share of PV technology. The rising cost of electricity owing to the supply-demand gap will further augment the use of solar PV in utility and non-utility applications.

The use of solar trackers on PV modules requires less design regulations when compared to mirrors, lenses, and Fresnel collectors on the CSP and CPV technology trackers. These features will fuel the growth of solar trackers in PV technology over the forecast period. CPV is an emerging technology in the solar industry. CPV system produces low-cost solar power owing to low manufacturing costs and fewer raw material requirements. This technology uses optics such as lenses to concentrate a large amount of sunlight on a small surface of PV materials to generate electricity.

Concentrated solar power (CSP) is used to harness the sun’s energy potential and has the capacity to provide consumers globally with reliable renewable energy even in the absence of the sun’s rays. Over the past few years, CSP has been increasingly competing with the less expensive PV solar power and concentrator photovoltaics (CPV), which is also a fast-growing technology.

In terms of revenue, utility was the largest application segment in 2021 with over 80.0% share. Increasing electricity cost, coupled with the rising demand for renewable sources for energy generation, is expected to augment the use of solar trackers in utility applications. This trend is projected to continue during the forecast period. The most widely used solar tracker in the utility sector is the single axis tracking system as utility solar installations are ground mounted, and single axis trackers can be used to follow the sun throughout daylight hours. Trackers are being used on a large scale in utility applications in light of the increasing government subsidies, coupled with feed-in tariff schemes, particularly in the North American and European regions. 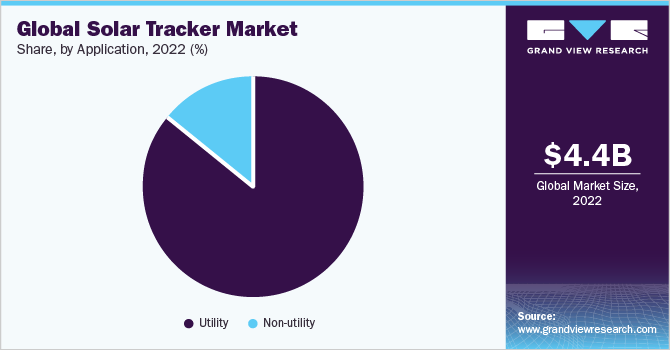 The prevalence of various government subsidies in North America and Europe will augment the use of solar panels in non-utility applications over the forecast period. One of the major factors affecting the application of trackers in non-utility projects is the high cost associated with them. Implementing solar trackers can be extremely costly, but it consequently helps in generating 25%-30% more solar power as compared to a fixed solar panel.

North America accounted for the largest revenue share of over 25.0% in 2021 and this trend is expected to continue till 2030. The growth is primarily attributed to the rising emphasis on renewable energy and the Paris Agreement on Climate Change that has recommended the usage of renewable energy in the nation’s energy supply. The government in the U.S. is also targeting to increase the usage of solar power in the economy through various initiatives. In the year 2011, DOE (U.S. Department of Energy) launched the SunShot Initiative with an aim to make the solar industry cost-competitive with conventional energy sources by reducing charges to less than 1 USD/watt by 2020. The initiative has sponsored more than 350 projects, which include companies, private universities, and national laboratories.

The Middle East and Africa is anticipated to witness the highest growth during the forecast period. The region is expected to witness significant growth over the next ten years on account of high solar potential and an increase in investments in solar projects in the region, particularly in the UAE and Saudi Arabia. Among these, Saudi Arabia held the largest share in the Middle East and Africa in 2021 owing to large investments being made by both domestic and foreign parties. The country also witnessed significant growth in light of investments being made by U.S. solar companies due to the country’s favorable climatic conditions.

Companies are focusing on developing advanced technology-based products owing to the growing industrial demand for advanced technology for tracking purposes. The manufacturing companies are adopting various organic and inorganic growth strategies for expanding their geographical reach and product portfolio. The strategy framework of major solar tracker manufacturers is centered around bagging orders for large purchases as it gives the manufacturer an opportunity to achieve economies of scale. The research and development of solar trackers is a major differentiating factor for manufacturers in this market. Some prominent players in the global solar tracker market include:

This report forecasts revenue and volume growth at the global, regional, and country levels and provides an analysis of the latest industry trends and opportunities in each of the sub-segments from 2019 to 2030. For the purpose of this study, Grand View Research has segmented the global solar tracker market report based on technology, type, application, and region:

How big is the solar tracker market?

What is the solar tracker market growth?

Which segment accounted for the largest solar tracker market share?

b. Double-axis trackers held the largest share of 50.74% in 2021 because these systems track the sunâ€™s rays along a two axes allowing them to increase system performance or more over fixed PV cells in the areas of high isolation.

Who are the key players in solar tracker market?

What are the factors driving the solar tracker market?

b. Key factors that are driving the solar tracker market growth include rising concerns over energy conservation and transition from non-renewable energy to renewable energy is expected to surge demand for solar energy and trackers over the forecast period on a global level.