The global super absorbent polymer market size was valued at USD 8.37 billion in 2019 and is anticipated to progress at a compound annual growth rate (CAGR) of 6.2% during the forecast period. Strong demand from the baby diaper segment is projected to stoke the overall growth. Also, surging demand for adult incontinence and female hygiene products owing to increasing awareness about hygiene is poised to drive the product demand. In terms of revenue, the U.S. market is likely to expand at a CAGR of 6.7% during the forecast period and is expected to continue remaining the largest market for Super Absorbent Polymer (SAP) over the forecast period. 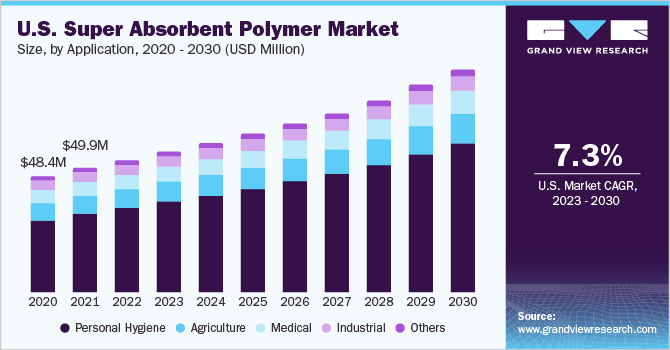 High consumer awareness regarding hygiene is fuelling the demand for adult incontinence and female hygiene products, which in turn is stimulating the market growth. Increasing disposable income along with growing awareness about sanitization in the country is also positively influencing the growth of the market in the U.S.

Moreover, increasing birth rate coupled with the rising geriatric population is projected to drive the demand for baby and adult diapers, which in turn is providing a fillip to the market for superabsorbent polymers. The focus of end-use industries on product innovation is also estimated to help the market gain significant momentum in the forthcoming years. Government initiatives to encourage applications of the product related to agriculture, particularly in water-scarce regions, are anticipated to further fuel the market.

Booming the personal care industry, especially in emerging economies, due to rising disposable income along with growing consumer consciousness regarding personal hygiene, is projected to augment the product demand. However, fluctuation in availability and protean prices of raw materials are hindering the growth of the market over the forecast period.

The prices of SAP in different areas do not differ substantially. High quality of super absorbent polymer is an essential component for hygienic and personal care products that determines the large extent of their functional quality. Hence, a large number of suppliers are carefully selected in the competitive tendering environment. The SAP market is largely characterized by the ability and willingness of consumers to switch between manufacturers in response to quality and price changes.

Super absorbent polymers are an important part of baby diapers and are used under moderately high-pressure conditions to absorb and retain fluids. Central & South America and Asia Pacific are expected to witness a brisk demand for baby diapers owing to several factors such as increasing disposable income, growing population, and increasing awareness regarding the benefits of synthetic baby diapers.

Developed regions such as Europe and North America are expected to have moderate demand for baby diapers owing to market saturation over the forecast period. Economies such as the U.S., Germany, and Japan are expected to witness a slightly lower birth rate compared to developing and emerging economies. Countries such as China, India, and Brazil are projected to lead their respective regional baby diaper markets. These emerging economies are characterized by rising disposable income and increasing population. Other moderately emerging countries such as Indonesia, Malaysia, Egypt, and Turkey are expected to experience an uptrend in demand for baby diapers.

Super absorbent polymers have water-absorbing and water retention properties which makes them suitable for applications in the agriculture industry, particularly in water-scarce regions. They increase the water use efficiency thereby increasing crop yield. Diversified soil characteristics, paucity of large cultivable land, and underprivileged conditions of farmers result in an inability to adopt advantageous and latest technologies and agricultural methods.

Super absorbent polymers (SAP) have been known to cause certain problems for human beings upon prolonged exposure to it. As these polymers are used in personal hygiene products such as baby diapers, female sanitary napkins, and adult incontinence products, such hazardous problems are expected to hamper its market growth in the near future. The disposable baby diapers are prone to cause discomfort to the babies in the form of rashes and respiratory problems. The workers engaged in manufacturing super absorbent polymers or SAP-based products also face similar problems, which include nose bleeding and problems related to respiratory tract and eyes.

Based on the application, the superabsorbent polymer market is segmented into adult incontinence products, baby diapers, agriculture, and female hygiene products. Baby diapers were the most prominent segment in 2018, accounting for just over three-quarters of the overall market revenue. The segment is expected to rise at a CAGR of 6.3% during the forecast period owing to a growing population along with increasing disposable income, particularly in developing regions, such as the Middle East and Africa, Central and South America, and the Asia Pacific. 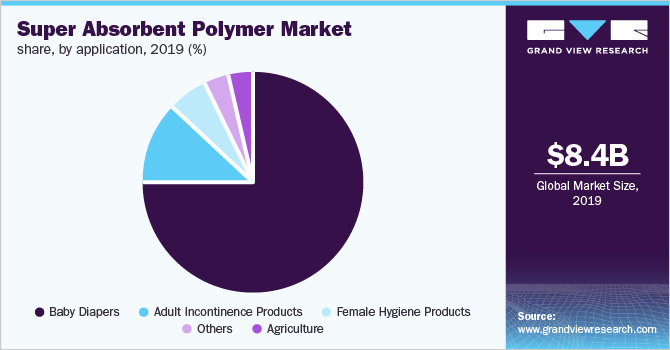 Adult incontinence products are poised to witness noteworthy growth during the forecast period owing to the increasing geriatric population in regions, such as North America and Europe. Rising awareness regarding hygiene is likely to result in a higher demand for female hygiene products in the forthcoming years.

Growing population, awareness regarding hygiene, and efforts by the companies to reach untapped markets are some of the prominent factors expected to assist the segment growth soon. Emerging economies, such as China and India are anticipated to lead the Asia Pacific region in the forthcoming years, owing to factors such as rapid population growth, high birth rate, rising disposable income, and rising awareness regarding baby health.

Europe was the leading revenue contributor in the global market for super absorbent polymer in 2019, with a total revenue share of more than 33.75%. It is estimated to retain its position until 2025. The market is driven by increasing demand from manufacturers of baby diapers owing to its high water absorption and retention capacity. Changing lifestyles and flourishing e-commerce are some of the primary factors contributing to regional market growth.

The Asia Pacific is anticipated to witness significant growth over the forecast period owing to high product demand from emerging economies, such as China and India. Baby diapers market is witnessing rapid growth in the region on account of rising disposable income, population, and awareness regarding baby health. 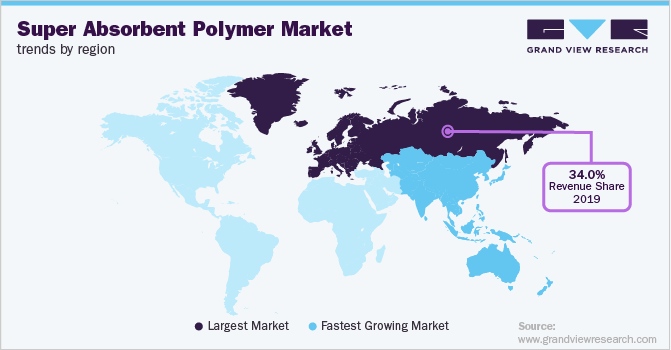 Since the past few years, hygiene industry in India is experiencing an unprecedented growth with increasing adoption of hygiene products by the Indian population. Rising hygiene awareness, ascending purchasing power, and a rapid shift from cloth nappies to diapers are major factors driving baby diapers market in India, which, in turn, is anticipated to fuel the demand for super absorbent polymers. Furthermore, female hygiene products segment is boosting the growth of the Indian hygiene industry, thereby driving super absorbent polymers market. Increasing awareness regarding hygiene among the female population is expected to fuel the demand for super absorbent polymers over the forecast period.

Also, the baby diapers market is expected to witness growth potential in untapped markets in the region, such as Indonesia, Vietnam, and Singapore, thereby propelling the demand for superabsorbent polymers in the Asia Pacific over the forecast period. China was the largest market in 2018 and is projected to continue leading over the forecast period. The growth can be attributed to increasing demand from various application segments, especially baby diapers, female hygiene products, and adult incontinence products. Increasing birth rate, rising purchasing power, and growing urbanization are factors boosting the demand.

Companies are taking strong measures to gain greater market penetration and a foothold in emerging economies. These measures include introducing multiple brands, strengthening their network, adopting fervent marketing techniques to reach out to customers, and developing products with superior qualities.

This report forecasts revenue and volume growth at global, regional, and country levels and provides an analysis of the latest industry trends in each of the sub-segments from 2014 to 2025. For this study, Grand View Research has segmented the global super absorbent polymer market report based on application, and region: 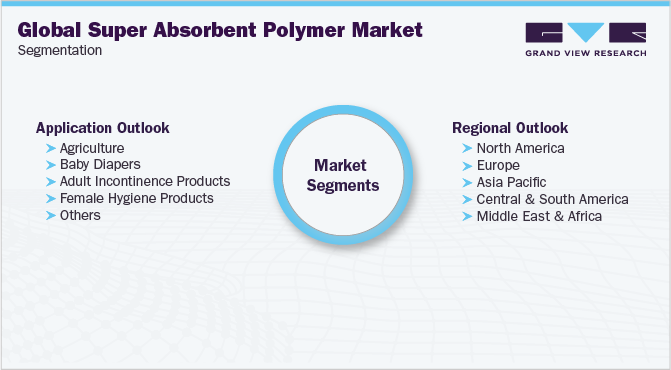