The global surge protection devices market size was valued at USD 2.35 billion in 2020 and is expected to register a compound annual growth rate (CAGR) of 8.5% from 2021 to 2028. The growth can be attributed to the growing usage of various consumer electronics and electrical equipment in residential and commercial applications and the subsequent need to protect those from unexpected surges. The eminent need to effectively protect sensitive consumer electronics from power fluctuations is expected to contribute to the growth of the market. Climate changes and the subsequent increase in lightning incidences are also anticipated to drive the demand for surge protection devices (SPDs) over the forecast period. 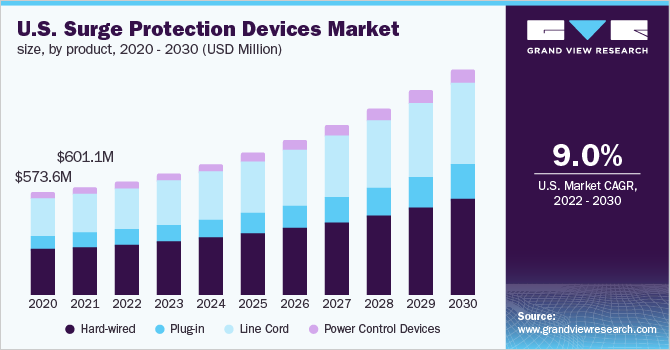 Manufacturing units are aggressively deploying high-voltage machinery and equipment. At this juncture, surge protection devices can play a vital role in saving the machinery and equipment from damages stemming from surges and transients, preventing equipment downtime, and subsequently improving the system and data reliability for both signal and power lines. Surge protection devices are widely used by incumbents of various end-use industries for diverting the surge current and limiting transient voltages. The growing emphasis on workplace safety also bodes well for the growth of the market over the forecast period.

Climate changes stemming from global warming are driving the number of lighting incidences. Lightening can typically cause power surges, which can be very intense as compared to the power surges induced by other causes. This is emerging as one of the major factors that are expected to drive the demand for SPDs over the forecast period. The growing adoption of consumer electronics, mobile phones, smartphones, tablets, electronic communication devices, and data equipment also bodes well for the rising demand for surge protection devices.

Electricity consumption for residential and commercial applications in the U.S. accounts for approximately 37% of the total electricity consumption. The awareness among residential and commercial end users about safeguarding electrical equipment is particularly growing and is expected to contribute significantly to the growth of the market. On the other hand, alternate energy programs are being introduced, especially in China and Germany, in the wake of the unabating demand for electricity. The demand for surge protection devices is expected to gain traction as a result over the forecast period.

The outbreak of the COVID-19 pandemic has had an adverse impact on the market. The production of surge protection devices has been particularly affected due to supply chain disruptions. Manufacturers of various electronic components, including surge protection devices, are busy evaluating the risk factors and remain concerned about the safety of their workers in the wake of the outbreak of the pandemic. They are also confronting short-term operational issues stemming from the lack of site access and supply chain constraints.

The hard-wired segment dominated the market in 2020 and accounted for a share of more than 45.0% of the global revenue. Hard-wired SPDs are typically installed on power lines for the protection of devices and outlets downstream from the device. They can also protect AC-powered, connected systems and equipment from the damages stemming from transients, surges, and AC power-induced events. Hence, hard-wired SPDs can be the most convenient surge protection solution to ensure reliable operations and extended performance.

The plug-in segment is anticipated to register the highest CAGR over the forecast period. Plug-in SPDs are mainly installed in intermediate panels and at the origin of the network for protecting the equipment from indirect lightning strikes. The demand for plug-in SPDs is anticipated to escalate over the forecast period owing to their application and the advantages they can offer at various endpoints. A plug-in SPD may require external overcurrent protection or may be included within the SPD.

The type 2 segment dominated the market in 2020 and accounted for a share of more than 30.0% of the global revenue. Type 2 SPDs are designed for industrial and commercial applications. The protection of electrical equipment and distribution panels at a factory or a commercial facility is of foremost importance as power failure or equipment damage can severely hamper productivity. Hence, the type 2 SPDs are mainly installed on the load side of the main service equipment.

The type 1 segment is expected to register the fastest growth over the forecast period. Type 1 SPDs are incorporated primarily to protect electronic equipment from lightning surges. Climatic changes in recent years have led to an increase in lightning strikes. Hence, the growing need to protect electrical equipment used in applications, such as solar plants and smart grids, from lightning surges is expected to drive the growth of the segment over the forecast period.

Power rating is one of the critical parameters helping in selecting the type of SPD to be used. However, the power rating is often mistaken for the ability of an SPD to provide enhanced protection. SPDs with a higher kA factor do not provide enhanced protection but rather deliver a longer product life. Hence, SPDs with a higher kA factor are ideal for industrial and data center applications. The 100.1-200 kA segment dominated the market in 2020 and accounted for a share of more than 32.0% of the global revenue.

The 50.1-100 kA segment is projected to register the highest CAGR over the forecast period. SPDs with power ratings ranging from 50.1 kA to 100 kA are primarily used by manufacturing units and for residential and commercial applications. As SPDs with 50.1-100 kA power ratings are capable of providing the necessary protection and longevity; the use of higher-rating SPDs, such as 100.1 kA and above, is only feasible for applications that are less price-sensitive and subject to regular high power surges. Hence, the 50.1-100 kA segment is expected to emerge as the fastest-growing segment over the forecast period.

The industries & manufacturing units segment dominated the SPD market in 2020 and accounted for a share of over 33.0% of the global revenue. Advances in technology and the strong emphasis on augmenting profitability are prompting companies to deploy various automation systems and high-end electronics. However, companies using electrical equipment are often subject to power line abnormalities and heavy lightning that may lead to the breakdown of the equipment. Such breakdowns typically add to the company’s operational costs. Hence, the demand for SPDs is anticipated to increase over the forecast period. 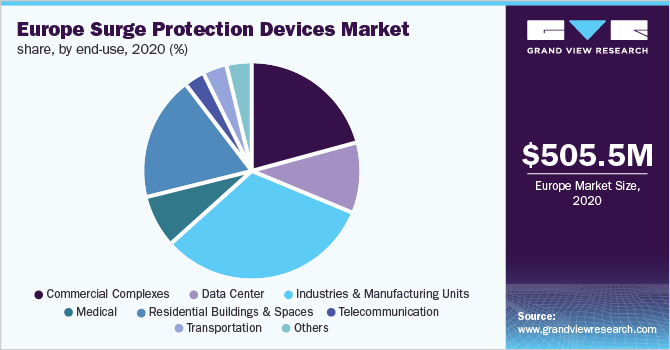 The commercial complexes segment is anticipated to register a promising CAGR over the forecast period. The commercial sector in developing economies, such as India, is growing noticeably owing to the favorable policies, such as Make in India and Startup India, being pursued by the government. Competition within the commercial sector is expected to intensify owing to such encouraging initiatives. Hence, commercial establishments are expected to opt for SPDs to safeguard their equipment, prevent any undesired downtimes, save costs, and augment profitability, thereby driving the growth of the segment over the forecast period.

North America dominated the surge protection device market in 2020 and accounted for a share of over 38.0% of the global revenue. The region happens to be an early adopter of advanced technologies. The level of awareness about the benefits of SPDs is also very high in the region. When it comes to the U.S., electricity consumption for residential and commercial applications accounts for approximately 37% of the total electricity consumption. The U.S. is also home to states, such as Florida, Louisiana, Mississippi, and Alabama, which are highly prone to lightning strikes. As such, North America has emerged as the largest regional market owing to all these factors.

Having realized that product quality is the key aspect of the market, market players are focusing on enhancing their product portfolios. Market players are primarily focusing on developing sophisticated and innovative products based on extensive research and development. For instance, in May 2019, Tripp Lite launched two new portable models of Protect It surge protectors, namely TLP648USBC, a U-shaped model, and TLP366CUBEUSBB, a power cube model. These models are flexible enough to be used in homes and offices. Some of the prominent players in the global surge protection devices market are:

The report forecasts revenue growth at global, regional, and country levels and provides an analysis of the latest industry trends in each of the sub-segments from 2016 to 2028. For this study, Grand View Research has segmented the global surge protection devices market report based on product, type, power rating, end-use, and region:

How big is the surge protection devices market?

What is the surge protection devices market growth?

b. North America dominated the SPD market with a share of 38.6% in 2020. This is attributable to increased sales of SPD integrated electronic devices such as personal laptops, printers, television, microwave devices, and washing machines among others.

Who are the key players in the surge protection devices market?

What are the factors driving the surge protection devices market growth?

b. Key factors that are driving the SPD market growth include the increasing use of electronics in residential and commercial sectors and the high cost associated with electrical equipment downtime.