The global temperature modulation devices market size was estimated at USD 2.0 billion in 2018 and is expected to grow at a compound annual growth rate (CAGR) of 7.1% from 2019 to 2026. Increasing number of surgical procedures worldwide, along with growing incidence of road accident fatalities is anticipated to drive the temperature modulation devices market. Additionally, growing demand of blood/IV warmers from ambulatory services and military/defense sectors are expected to further fuel the market’s growth in the near future. 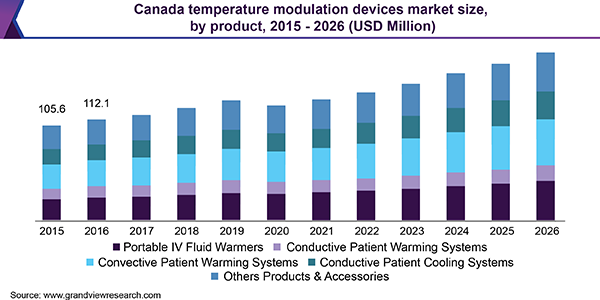 Incidence of patient hypothermia are the biggest factor that demand the need for patient temperature control systems globally. In the U.S., an estimated 10-12 million incidents of hypothermia along with another 2-3 million incidents of hyperpyrexia have been observed. Factors such as blood loss due to injury/shock, extreme environments, natural calamities, and cold stored blood/IV that may cause hypothermia, increases the risk of fatality. It has been observed that in the U.S. out of few million incidents of IV induced hypothermia, 75.0% cases are caused in ambulatory settings. In order to prevent risk due to blood/IV induced hypothermia, portable blood/IV warmers have witnessed an increasing demand in the U.S. and EU since 2010, thereby driving the market’s growth over the forecast period.

Road accidents and gunshot wounds are the primary reason for fatalities due to major blood loss, globally. Hemorrhagic shock results in the death of around 60,000 U.S. citizens, whereas globally the number of fatalities go up to 2.0 million deaths annually. Among the global hemorrhagic fatalities, 1.5 million are due to physical injury such as road/workplace accident, and gunshot wounds. Blood/IV warmers reduce the risk of hypothermic complications caused by inducing cold stored blood/IV to hemorrhagic patients and thereby help in increasing the chances of patient survival.

Growing incidence of surgical procedures have further fueled the demand for patient temperature control devices in North America. Over 70.0% of patient warming demands in the U.S. are met in hospitals, whereas the rest are met in ambulatory services and defense sectors. Major surgical procedures often require considerable time to complete. Furthermore, many surgical procedures require transplantation and implants that are often maintained well below regular body temperature in order to control microbial infection. Introduction of such implants are observed to reduce the body temperature of the patient, thereby requiring patient heating systems. Additionally, weaker patients find it difficult to regulate their body temperature and therefore, require body warming devices to help them recover better and reduce the risk of complications.

Accessories and other products were observed to be the second largest market segment in the temperature control devices market segment. Other products include non-portable/traditional blood/IV warmers such as 3M’s Ranger and similar products, along with non-contact temperature regulators and room temperature control systems. Accessories hold a major part of the market, as most consumers often continue to demand product accessories in higher volume than that of the complete device itself. Hospital institutions have steady long-term contracts with suppliers that manufacture temperature modulation device accessories. 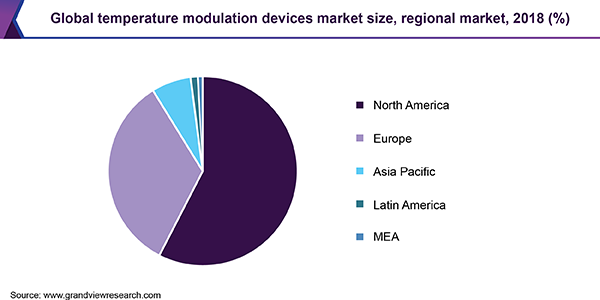 North America registered maximum market share in 2018 and is expected to witness growth in future as well owing to the high cost of medical devices, increasing healthcare expenditure, and increasing incidence of surgical procedures/hospital visits. In addition, growing number of product development in patient temperature control system is also expected to drive the market in the region.

Increased spending on defense sector in addition to the spending on search and rescue emergency services have resulted in the growing demand for temperature modulation devices in North America. The geographical location of this region results in an extremely cold weather patterns that render the region prone to blizzards and heavy snow. Numerous fatalities have been recorded that have been attributed to such extreme snow/frost related incidents.

Asia Pacific is anticipated to be the fastest growing segment owing to growing presence of quality medical device manufacturers, increased awareness, increased medical expenditure, and demand from remote emergency healthcare & defense sectors to name a few. Moreover, growing number of surgeries in Asia Pacific region owing to the larger population and increasing incidence of accidental injuries are some of the key factors driving the demand for temperature modulation devices in the region.

The players are focusing on growth strategies, such as new product development, mergers and acquisitions, expanding into emerging markets and more.

3M is among the most popular manufacturer of patient temperature modulation devices with a known brand in every product segment such as 3M Bear Hugger and 3M Ranger. Bear Hugger is a normothermia system that provides both patient warming and patient cooling effects that helps in significantly increasing the success of patient recovery. 3M ranger has been among the most well-known hospital-based blood/IV warmers in the U.S. and E.U, providing a faster output of body temperature regulated blood/IV fluids with increased volume capacity compared to their competitors, allowing 3M to garner a significant market presence in the western world. Some of the prominent players in the temperature modulation devices market include

This report forecasts revenue growth at global, regional & country levels and provides an analysis on the industry trends in each of the sub-segments from 2015 to 2026. For the purpose of this study, Grand View Research has segmented the global temperature modulation devices market report based on product, and region:

How big is the temperature modulation devices market?

b. The global Temperature Modulation Devices market size was estimated at USD 2.19 billion in 2019 and is expected to reach USD 2.34 billion in 2020.

What is the temperature modulation devices market growth?

Which region accounted for the largest market share in temperature modulation devices market?

b. North America dominated the temperature modulation devices market with a share of 57.0% in 2019. This is attributable to the high cost of medical devices and the expensive medical care market in North America.

Who are the key players in the temperature modulation devices market?

What are the factors driving the temperature modulation devices market?

b. Key factors that are driving the market growth include increasing number of surgical procedures worldwide, growing incidence of road accident fatalities, growing demand of blood/IV warmers from ambulatory services, and military/defense sectors are expected to further fuel the marketâ€™s growth in the near future.

Owing to the exponential growth in the number of Covid-19 positive cases, the risk for patient hospitalization increases as healthcare institutions reach their capacity. Since fever and pneumonia are among the most commonly observed symptoms that exhibit severity, controlling patient temperature becomes a priority. Demand for patient temperature modulation devices is on the rise as critical patients require body warmers or body cooling devices to regulate the fever and prevent mortality due to patient shock. We are considering this pandemic impact on our estimates. The updated report will include Covid-19 as a key market contributor.