The U.S. newspaper market size was estimated at USD 27.84 billion in 2016. The market has experienced significant shrinkage in recent years, which is likely to continue over the course of the forecast period. A large drop in print advertising spending has already caused major U.S. newspaper publishing companies to cut costs by downsizing. 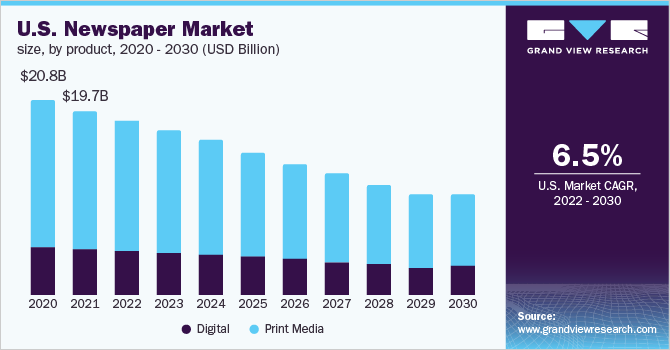 The Internet has gone one step further than television in deteriorating the advertising income of newspapers. For instance, people have moved on to broadcast media, which has proven to be a convenient medium for classified advertising, predominantly in categories such as real estate, jobs, and vehicles. Free services such as Craigslist have wiped out classified advertising departments of newspapers, some of which depended majorly on classifieds for their ad revenue.

Advertising emerged as the largest revenue-generating category within the U.S. newspaper market and accounted for about USD 17.49 billion in 2016. Following the presidential election in 2016, some major U.S. newspapers reported a steep jump in digital subscriptions, giving a lift to their overall circulation sums. However, the newspaper industry, as a whole, is facing ongoing challenges as online media look to decimate newspaper advertising and this will only continue over the course of the forecast period.

The U.S. market is highly competitive and fairly concentrated. Key market participants include MediaNews Group Inc.; News Corporation; Tribune Publishing; and The New York Times Company. These players are using strategies such as collaboration, acquisition, and new product development and launch to strengthen their position amidst competition.

This report forecasts revenue growth at the country level and provides an analysis of the latest industry trends in each of the sub-segments from 2014 to 2025. For the purpose of this study, Grand View Research has segmented the U.S. newspaper market report on the basis of revenue generation: