The global UV (Ultraviolet) tapes market size was valued at USD 274.9 million in 2015. UV tapes are a part of pressure sensitive adhesive (PSA) tapes and are characterized by strong adhesion properties. These are used in the electronics industry for wafer dicing, back grinding, PCB grinding, and glass dicing applications. Growing electronics and semiconductor industries are expected to drive the market over the forecast period.

Polyolefin (PO) UV tapes segment held the largest share in the U.S. in 2015. They are known to exhibit strong adhesion properties, along with superior performance in extreme heat and pressure, a courtesy which, they were most widely used. Growing demand for polyolefin UV tapes in the wafer dicing application is expected to drive the industry over the forecast period.

This report is classified on the basis of products, into polyolefin (PO), polyvinyl chloride (PVC), polyethylene terephthalate (PET) and others including phenolic film and polypropylene tapes.

The market for polyolefin UV tapes is projected to register the highest CAGR of 9.7% from 2016 to 2025 due to their superior adhesive properties under extreme conditions, as compared to other products. The product is expected to witness increased demand from the emerging countries in the Asia Pacific region.

PVC UV tapes accounted for the second largest share in 2015. The market is driven by growing demand for compact semiconductor and electronic components, which help in reducing the size of the electronic device.

As seen below, wafer dicing dominated the application segment in 2015 and was valued at over USD 130 million. Wafer dicing is basically a process of separating a die from the wafer of a semiconductor. Polyolefin UV tapes are most commonly used in this application. Growing demand for minute electronic components such as ICs and chips are driving the market in this segment. 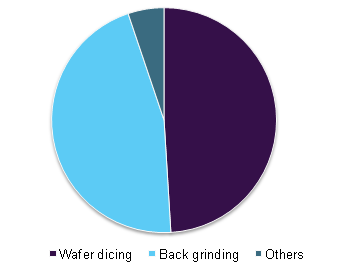 The application of UV tapes in the back grinding process held the second largest share of over 40% in 2015. In this process, the thickness of a wafer can be reduced to less than 25 micro meters, which in turn, helps in minimizing the size of electronic components such as micro-chips.

Asia Pacific was the largest UV tapes market accounting for over 50% of the global revenue in 2015. This region witnessed a high growth of the electronics industry in the past few years. Some of the major electronics players including Panasonic, Samsung, Sony, LG, and Hitachi are based in this region. Growing demand for semiconductors and components such as ICs and display units have driven the industry in this region.

The North America market size was over USD 60 million in 2015, the second-largest after Asia Pacific. This region is expected to grow in accordance with the U.S. industry growth. The market in this region is projected to grow in line with the growing electronics industry and awareness regarding the advantages of UV tapes such as high heat resistance. Besides, the fact that they can be recycled, is also expected to play a key role in the growth in this region.

Europe is expected to grow at a relatively slower rate over the forecast period, as the market in most of the countries in this region is mature. However, Germany and France, with growing semiconductor and electronics industries, are expected to exhibit reasonable growth from 2016 to 2025.

Expansions & investments were one of the major strategic initiatives adopted by these players. Loadpoint Ltd. expanded its subcontract facility in the UK by adding a new 300mm diameter dicing saw, known as NanoAce. This investment helped the company consolidate its position in Europe.

These players also constantly invest in R&D activities in order to improve their services and product offerings. This was evident from the fact that Furukawa Electric Co. Ltd., one of the key players in Japan, spent nearly 1.3% of its revenue on R&D activities in 2015.

This report forecasts revenue and volume growth at global, regional & country levels and provides an analysis of the industry trends in each of the sub-segments from 2014 to 2025. For the purpose of this study, Grand View Research has segmented the global UV tapes market by product, application, and region: