The global vegan food market size was valued at USD 12.69 billion in 2018 and is projected to expand at a CAGR of 9.6% from 2019 to 2025. Increasing awareness about the benefits of following vegan diet is the key factor responsible for the growth of this market. North America, Europe, and Asia Pacific, in particular, have a large percentage of vegan population.

Growing awareness about animal health and animal cruelty in the food industry has been encouraging people to shift from animal-based to plant-based food products. According to The Vegan Society, from 2012 to 2017, the meat-free food demand grew by 987%. The product is Googled three times more than gluten-free and vegetarian products. 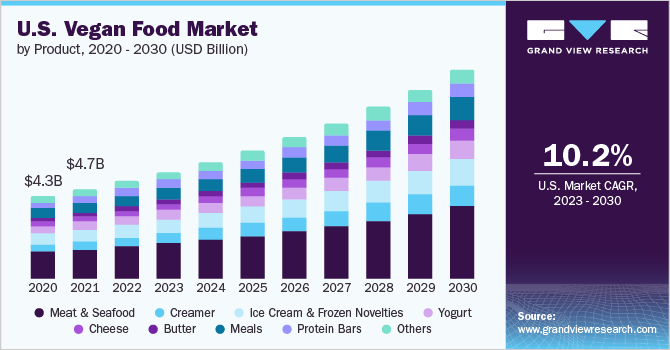 This implies the rapidly growing popularity of the product across the globe. U.S., Australia, U.K., New Zealand, Sweden, Canada, Israel, Ireland, Austria, and Germany have the highest percentage of vegan population in the world. Over the past few years, one in three American consumers has either stopped or reduced meat consumption. In Sweden, meat consumption reduced significantly in 2017.

Dairy alternatives were the largest product segment in 2018 and accounted for more than 50% of the global revenue. Around 65% of the global population is lactose intolerance, which is a key factor boosting the demand for dairy alternative food items. Availability of a number of products, such as cheese, yogurt, ice cream, and snacks, has also attracted non-vegetarians and widened the consumer base of this segment.

In addition, manufacturers in the market have introduced a number of quality food items in different flavors with attractive packaging solutions. This is also likely to contribute to segment growth. Among such products, plant-based cheese accounted for the largest share in the dairy alternatives. Increasing product portfolio along with rising cases of lactose intolerance is expected to fuel its demand.

Offline segment was the largest distribution channel and is projected to maintain its dominance over the forecast period. This segment includes convenience stores, specialty stores, hypermarkets, and supermarkets. Growing number of supermarkets and hypermarkets have increased the overall product sales. Furthermore, consumers prefer shopping from brick-and-mortar grocers due to easy access and availability. However, online channel is estimated to witness the highest CAGR from 2019 to 205 due to rising penetration of the internet as a result of extensive usage of smartphones and other such devices.

Around 48% of the U.S. consumers buy at least some of their groceries through online retail and this percentage is expected to increase in the near future. As a result, many major retail chains across the world have been investing significantly in online distribution channels. Walmart, a leading multinational retail corporation, has started delivering foods online. Thus, an increasing number of online grocery platforms is expected to boost the online sales of the products, thereby propelling the segment growth. 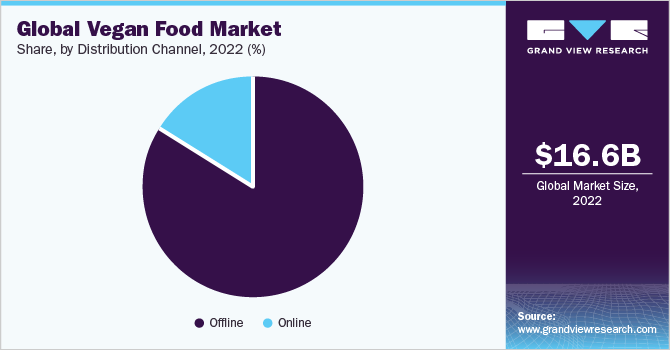 According to The Institute of Grocery Distribution and IGD Services, China, U.S., Japan, U.K., South Korea, France, Australia, Germany, Canada, and Spain are the largest online grocery markets in the world. In 2018, The Kroger Co., another giant retailer, has invested in the online distribution platform in these key countries. Furthermore, Kroger also started self-driving grocery delivery vehicles to enhance its service.

North America lead the global vegan food market in 2018 due to higher vegan population in the region due to increased concerns about animal cruelty in the food industry and its negative impact on the environment. In addition, U.S. has a large number of lactose intolerant people, which fuels the demand for alternative dairy products. In 2017, Cal-Maine Foods, Inc. reported a loss of USD 74 million due to an increased preference for plant-based egg alternatives.

Asia Pacific is expected to witness the fastest growth at a CAGR of 12.1% from 2019 to 2025 on account of rising health consciousness among consumers. Moreover, increasing per capita income levels in the developing countries including China, India, Thailand, Taiwan, and Bangladesh will contribute to market growth. Key manufacturers in the market have been focusing on expanding business in APAC due to high growth opportunities.

This report forecasts revenue and volume growth at global, regional, and country levels and provides an analysis of the latest industry trends in each of the sub-segments from 2015 to 2025. For the purpose of this study, Grand View Research has segmented the global vegan food market report on the basis of product, distribution channel, and region: