The global voice and speech recognition market size was valued at USD 14.42 billion in 2021 and is anticipated to grow at a compound annual growth rate (CAGR) of 15.3% from 2022 to 2030. The market is anticipated to be driven by technological advancements and the rising adoption of advanced electronic devices. Voice-activated biometrics used for security purposes help in providing access to authenticated users for performing a transaction. The growing use of voice biometrics is among the major factors driving the market growth. The increasing demand for voice-driven navigation systems and workstations is impelling growth in the hardware and software segments. 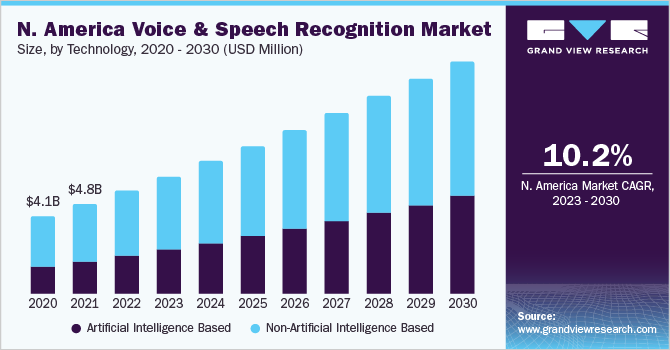 The integration of voice-enabled in-car infotainment systems is gaining popularity across the globe as several countries initiate “hands-free” regulations that govern the use of mobile phones while driving. The developers of voice and speech products are focusing on innovations, which are expected to accelerate the market growth over the forecast period. The use of voice recognition technology in smartphones enables doctors and clinicians to translate their voice into a rich, detailed clinical description, which is recorded in the Electronic Health Record (EHR) system. The increasing penetration of voice-enabled IoT devices in smart home automation is expected to drive the market in the near future. IoT-enabled devices would benefit a number of traditionally offline devices with innovative means of user interactions in addition to traditional means, such as touch screens and buttons.

Furthermore, this technology has been assisting doctors and radiologists in maintaining records of patients owing to benefits, such as reducing the report turnaround time and assisting doctors in record keeping. The integration of speech recognition with Virtual Reality (VR) is expected to lead to enhanced market demand. For instance, in February 2017, Facebook enhanced its VR platform, Oculus rift, by adding speech recognition to the VR gear of the oculus rift. On the other hand, the voice recognition segment is projected to record the fastest CAGR during the forecast period.

Artificial intelligence exceptionally converts speech into well-structured algorithms by undergoing certain stages, including the representation of speech units, formulation, and development of recognition algorithms along with the demonstration of correct inputs. The rising developments in machine learning and natural language processing are expected to boost the growth of the Artificial intelligence based technology segment. A rising number of Artificial intelligence based digital assistants, such as Alexa and Cortana, are expected to drive the demand for voice and speech recognition solutions over the forecast period.

On the basis of verticals, the global market has been further divided into the automotive, enterprise, consumer, BFSI, government, retail, healthcare, military, legal, education, and others. In terms of revenue, the healthcare segment accounted for the highest share of more than 29.00% in 2021. Speech recognition boosts the process of data capturing in EHR systems. This process empowers physicians to interact with the system by speaking a few words. Speech recognition is still in a developing stage and deployed in individual segments of healthcare, which include radiology, pathology, emergency medicine, and others. 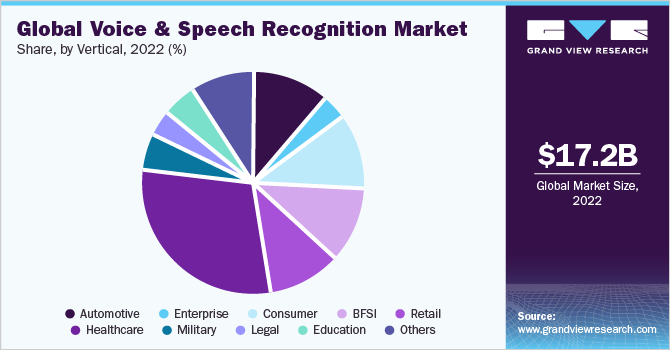 The automotive vertical also has a significant market share. The enhancement of automotive technologies, such as connected devices would update the driver with traffic conditions on the route and alternative routes. Voice & speech recognition technologies are expected to have a wide scope of application in consumer and retail verticals over the forecast period on account of the rising adoption of connected devices and growing penetration of personal assistants, such as Google Home and Amazon Alexa, in the Europe and Asia Pacific regions.

On the basis of geographies, the global market has been further divided into North America, Europe, Asia Pacific, South America, and Middle & East Africa. North America accounted for the maximum share of more than 33.00% of the global revenue in 2021. The region is expected to expand further at a steady CAGR retaining the dominant market position over the forecast period. The growing adoption of voice-enabled applications in smartphones and the increasing use of voice & speech recognition in mobile banking, consumer electronics, and IoT devices are expected to drive the market in the North America region.

In Europe, speech & voice recognition technologies are expected to witness increased applications in the consumer electronics and retail sectors owing to the rising trend of connected devices in automotive and home automation. The demand for speech & voice recognition is growing in China, Japan, and Singapore, which is expected to fuel the market growth in the Asia Pacific region. The regional market is estimated to register the fastest CAGR from 2022 to 2030. The rising penetration of voice-enabled devices in the automobile and healthcare segments is also expected to boost the APAC regional market growth.

Vendors in the market are focusing on increasing the customer base to gain a competitive edge. Therefore, key players are taking several strategic initiatives, such as mergers and acquisitions and partnerships. In September 2020, Cantab Research entered into a partnership with Nuix, the creator of innovative software that transforms data into actionable intelligence. Together, Speechmatics and Nuix are bringing highly accurate, secure speech recognition technology to businesses through an end-to-end software solution.

This report forecasts revenue growth at the global, regional, and country levels and provides an analysis of the latest industry trends in each of the sub-segments from 2017 to 2030. For the purpose of this study, Grand View Research has segmented the global voice and speech recognition market report based on function, technology, vertical, and region:

Which segment accounted for the largest voice and speech recognition market share?

Who are the key players in the voice and speech recognition market?

What are the factors driving the voice and speech recognition market?

How big is the voice and speech recognition market?

What is the voice and speech recognition market growth?