The global wind power market size was valued at USD 99.28 billion in 2021 and is expected to expand at a compounded annual growth rate (CAGR) of 6.5% from 2022 to 2030. The growing need to replace conventional sources of energy with renewable sources is projected to drive the market for wind power in the upcoming years. Solar and wind power generation which were considered expensive two decades ago are now considered more cost-competitive than new-built coal or gas plant today. Moreover, in the coming years, it is expected to become more cost-efficient to build new wind and solar than to run existing coal or gas plants. 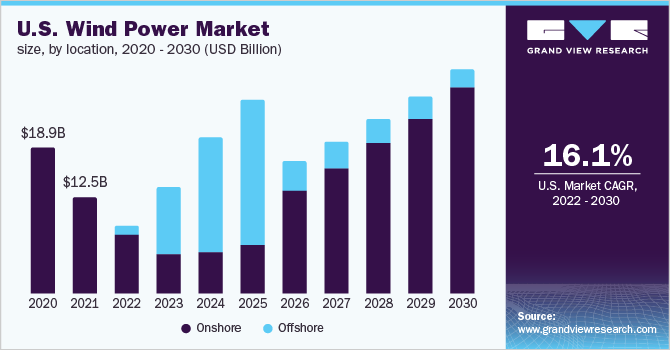 The wind power industry has been growing at a steady pace in the U.S with favorable legislation for the new installation of wind power. In 2021, 9.2% of total U.S. power generation was from wind energy. The demand for wind power is expected to increase during the forecast period owing to the increasing viability of onshore and offshore wind farms and boosting growth.

Asia Pacific remains the largest onshore and offshore wind power market, accounting for more than 42.43% of new installed capacity in 2021 for the Asia Pacific region in terms of revenue. In 2021, China and the U.S. witnessed the world’s largest onshore installation, together accounting for more than 60% of new onshore additions. The majority of OEM and EPC players are located in China, which is another factor driving the market growth in the country.

The wind energy producing companies are also shifting towards offshore wind farms to produce energy. The offshore wind power projects are projected to create a possibility for relishing projects in the deep-water sites where the high speed creates a much favorable situation for operations and thus driving the offshore wind power industry. Governments across the region have been very supportive of using renewable sources of energy, such as wind, solar, biomass, and other renewable sources of energy.

Regulatory authorities across the region are focusing to reduce dependence on conventional sources of energy to curb carbon footprint which is encouraging the generation of power by using renewable sources of energy such as wind and solar. It is anticipated that wind power and solar energy would lead in the direction of the transformation of the world electricity industry.

Globally, the cost of installation of the onshore and offshore wind power projects has declined and is projected to be declined in the upcoming years which is further expected to drive the market growth. The Levelized Cost of Electricity (LCOE) for installed onshore wind projects is already modest as compared to the fossil fuel source of generation and is further set to decrease the installed cost and will help to improve the performance of the wind power plants in the future.

China, in the Asia Pacific region, will continue to dominate the onshore wind power industry, followed by North America. Brazil, India, Vietnam, and Australia are expected to be the potential markets for offshore wind power installation however varying political support in these countries is expected to propel the growth of the market.

The utility sector dominates the industry, accounting for more than 85.87% of total market value in 2021. The non-utility sector includes both commercial and residential wind power installations. Non-utility applications counted for a lower market share than utility on account of the infeasibility of applying wind turbines due to land constraints. Another major factor affecting the application of wind turbines in non-utility projects is the high cost associated with them. 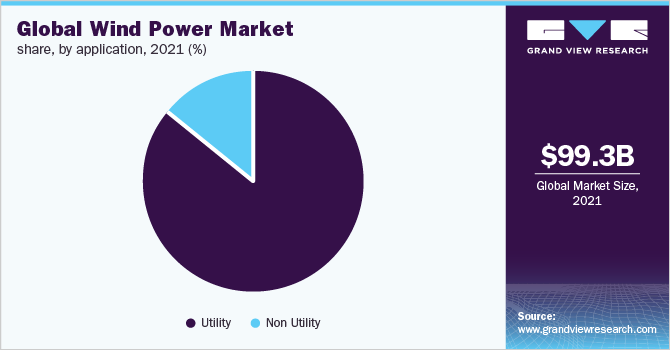 Wind turbines for utility scale applications are typically installed in large, multi-turbine wind farms which are connected to the nation's transmission system. Large scale utility-scale wind power projects involve multiple land, construction, and other permits, as well as careful management of relationships with different stakeholders involved in the process. The easing of barriers to the installation of utility scale projects is expected to drive the growth of the utility scale segment.

The Asia Pacific region accounted for the largest revenue share of more than 42.43% share in 2021 and is expected to continue its dominance over the forecast period. China accounted for the highest installation in the region due to ongoing initiatives and investments undertaken by the government to augment the industry growth.

China’s onshore wind power industry is projected to rise steadily in the coming years as the government is encouraging the expansion of renewable infrastructure, to reduce the stake of thermal power and reduce pollution in the country’s power generation. This is likely to determine the progress of wind power projects in the country which, in turn, is projected to drive the growth of the overall market.

North America and Europe are recognized as the competitive and mature regions in the wind power market. In 2017, IKEA Systems B.V. had amplified its direct ownership of wind power energy assets for self-generation purposes in North America to almost 0.4 GW. The Levelized Cost of Electricity (LCOE) of an offshore wind power plant is already viable in European markets.

For instance, the Netherlands and Germany have zero-subsidy wind power projects and lower auction prices. Thus, offshore wind farms would be competitive in other markets across the region in upcoming years, dropping in the short range of costs for fossil fuels such as gas and coal.

Companies are emphasizing on Research and Development (R&D) to develop advanced products to gain a competitive edge. For instance, in March 2020, Siemens Gamesa has taken action to continue the high level of activity across the business segment for manufacturing, installing, and service providing for wind turbines.

An erudite supply chain that supports the wind power energy industry, and the company is working firmly to maintain continuity and as well as to mitigate risk. Also, companies’ installation and service providing teams are managing the complex international logistics and are monitoring all borders, and maintaining travel limitations to guarantee safe travel. Some prominent players in the global wind power market are:

This report forecasts volume and revenue growth at global, regional, and country levels and provides an analysis of the latest industry trends in each of the sub-segments from 2019 to 2030. For this study, Grand View Research has segmented the global wind power market report based on location, application, and region:

How big is the wind power market?

What is the wind power market growth?

Which segment accounted for the largest wind power market share?

b. Onshore segment accounted for a share of 71.66% in the global wind power market in 2021. However, offshore segment is expected to be the fastest growing segment in terms of location for wind power from 2022 to 2030. The offshore wind power projects are projected to create a possibility for relishing projects in the deep-water sites where the high speed creates a much favorable situation for operations and thus driving the market for offshore locations.

Who are the key players in wind power market?

What are the factors driving the wind power market?

b. Key factors driving the Wind Power market growth include technological advancement along with government initiatives to promote installation of wind turbine farms coupled with increasing investment in renewable energy is expected to drive the market growth.