The global wound dressing market size was valued at USD 12.4 billion in 2021 and is projected to expand at a compound annual growth rate (CAGR) of 5.3% from 2022 to 2030. Rising incidence rate of various wounds such as pressure ulcers, and surgical site wounds, along with rise in number of geriatric population, and increase in traumatic accidents worldwide is expected to impel the market. Chronic wounds such as venous leg ulcers, and diabetic foot ulcers are increasing worldwide. For instance, according to NCBI, around 6.5 million people in the U.S. are affected by various chronic wounds. Moreover, rise in the diabetic population is further expected to propel the market. For instance, as per CDC, in 2018, among the crude population, 34.2 million people in the U.S. have been diagnosed with diabetes, which comprises around 10.5% of the total U.S. population. 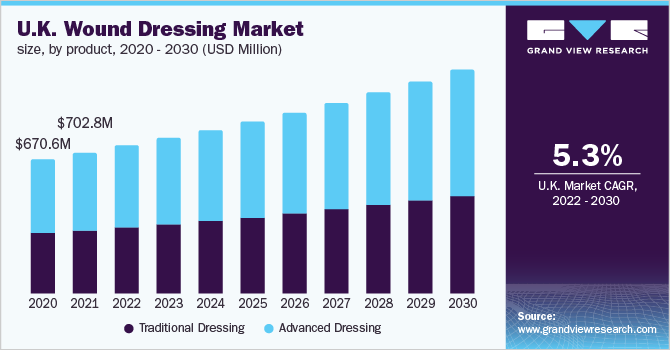 Furthermore, there has been increase in number of global traumatic accidents. For instance, according to statistics by WHO, every year around 1.2 million people die due to road crashes, whereas, 20 to 50 million people sustain non-fatal injuries. Similarly, as per Economic Times, India witnessed 5,54,796 road accident cases in the year 2020. Such accidents frequently result in significant blood loss and other injuries, necessitating prompt medical response, sometimes requiring surgical procedures to offer patient with instant relief. Thus, rising number of accidents is likely to boost the demand for wound dressing products which is anticipated to lead substantial growth of market over forecast duration.

The outbreak of COVID-19 pandemic was expected to lower the use of advanced wound dressing, as they require healthcare advice, thereby restricting the growth of market. However, post-pandemic, the market is anticipated to grow with a significant growth rate over the forecast duration. This can be attributed to initiatives such as partnership, research and development, geographic expansion, and launch of technologically advanced products by major market players. For instance, in September 2021, Coloplast Corp. inaugurated a factory in Central America, which was intended to support the global growth of company. Similarly, in October 2021, Medline Industries announced an investment of USD 77.5 million to build a new distribution center in Kansas. Thus, due to aforementioned factors, the market is expected to boost over the post-pandemic period.

The advanced dressing segment dominated the market and accounted for the largest revenue share of 55.06% in 2021. This can be attributed to rising cases of obesity and venous leg ulcers. For instance, as per a study by Sage Journals, the prevalence rate of obesity in India is 40.3%. Similarly, according to WHO, 25.1% of people in Germany are obese. Obese people are more susceptible to venous leg ulcers, thus, rising obesity among the population is expected to help the advanced dressing segment dominate over the forecast period.

The traditional dressing segment is expected to witness a considerable CAGR of 5.1% over the forecast period. Traditional dressings are most commonly used to treat burn cases, thus, rising number of burn cases is expected to boost the traditional dressing segment. For instance, according to WHO, on an average 265,000 deaths are caused due to burns every year. Moreover, in India, around 1,000,000 people are moderately or severely burnt each year. Similarly, as per CDC in the U.S. approximately, 4,500 burn victims die annually and 10,000 die due to burn related infections, thereby, boosting segment growth.

The chronic wounds segment dominated the market and accounted for revenue share of 60.9% in 2021. This can be attributed to increasing incidence of chronic diseases and geriatric population globally. For instance, as per Ageing Asia, in Indonesia, the number of people aged above 60 was 27,524,000 in 2019, which is projected to reach 69,792,000 in 2050. Similarly, there has been increase in number of people suffering from diabetes and diabetic foot ulcers. For instance, as per ScienceDirect, diabetic foot ulcers may affect 25% of the diabetic population and may lead to amputation in around 20% of the infected population. According to American Diabetes Association, in 2018, around 34.2 million people in the U.S. has diabetes, which according to BMC Population Health Metrics is anticipated to triple by 2060. Thus, boosting the segment growth.

The acute wounds segment is projected to witness a significant CAGR of 4.7% over the forecast period. This can be accredited to rising number of surgical wounds and surgical site infections worldwide. For instance, as per study by Wound International, the incidence rate of surgical site infections in general surgery was found to be 11.7%. Similarly, rising incidence of traumatic accidents is expected to impel the segment growth. For instance, as per an article by Brady United Organization, around 316 people in the U.S. are shot every day, leading to acute wounds, which requires wound dressing to heal. Thus, due to above-mentioned factors, the market is expected to impel over the forecast years.

The hospital segment dominated the market and accounted for revenue share of 45.2% in 2021. This can be credited to rising surgical procedures, and increasing number of hospitals. For instance, according to a study published by NCBI in 2020, globally an estimated of 310 million surgical cases are recorded annually, out of which 40 million – 50 million are carried out in the U.S. alone. Moreover, there has been increase in number of hospitals and hospitalization worldwide. For instance, as per the Australian Institute of Health and Welfare, the number of hospitalization in Australia has increased. For instance, in 2019 – 2020, 11.1 million people in Australia were hospitalized. Thus, due to aforementioned factors, the hospital segment is expected to dominate the end-use segment. 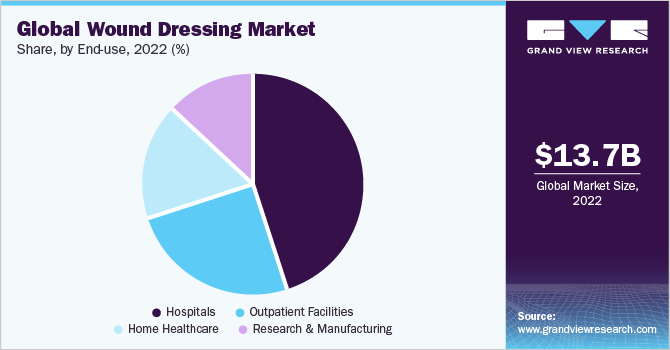 North America dominated the wound dressing market and accounted for revenue share of 45.4% in 2021. This dominance can be accredited to well-developed healthcare infrastructure, increasing awareness and presence of major key players in the region. Additionally, increase in number of surgeries in the North America region is expected to impel the market. For instance, according to Life Span Organization, approximately 500,000 open-heart surgeries were performed in the U.S. in 2018. Similarly, according to AHA Journals, approximately, 40,000 children undergo a congenital heart surgery in the U.S. As such surgeries take time to heal, wound dressing products help in healing these wounds in quick duration. Hence, wound dressing are preferred post-surgery, thereby, impelling the market in North America.

The market is highly fragmented in nature, and have many large and small market players. Competitive rivalry and the degree of competition is expected to be high, which may increase further, as current market players are intensifying their strategies to take a hold on majority of the collagen dressing market. To have a competitive edge over the competitors, many market players are entering into various strategic initiatives such as product launch, mergers and acquisition, and geographic expansion. For instance, in June 2021, MiMedx received regulatory approval from the Japanese Ministry of Health, Labour and Welfare to commercialize their product EPIFIX in Japan. Thus, with various strategies adopted by the market players, the market is predicted to impel during the forecast period. Some of the prominent players in the wound dressing market include:

This report forecasts revenue growth at global, regional, and country levels and provides an analysis of the latest industry trends in each of the sub-segments from 2018 to 2030. For the purpose of this study, Grand View Research has segmented the global wound dressing market report on the basis of product, application, end-use, and region:

How big is the wound dressing market?

What is the wound dressing market growth?

Which segment accounted for the largest wound dressing market share?

b. The advanced product segment that comprises moist, antimicrobial, and active products dominated the overall wound dressing market, commanding over 55.06% revenue share in 2021.

Who are the key players in the wound dressing market?

What are the factors driving the wound dressing market?

b. Key factors that are driving the wound dressing market growth include the rising prevalence of conditions such as leg ulcers, venous stasis ulcers, pressure ulcers, and diabetic ulcers, that require lesion management, are anticipated to boost the global wound dressing market over the forecast period.