The global xylitol market size was valued at USD 447.88 million in 2020 and is expected to expand at a compound annual growth rate (CAGR) of 6.4% from 2020 to 2028. Growing demand for xylitol in food and nutraceutical applications is expected to be a key driving factor for the market over the forecast period. Low-calorie, crystalline xylitol is a natural sweetener found in fibrous plant foods and hardwood trees. It is the only sugar that has the same sweetness intensity as compared to sucrose. It can be produced by chemical or enzymatic hydrolysis from different plant sources having polysaccharides. It is largely produced through a chemical process at an industrial scale, which is based upon catalytic xylose dehydrogenation. The process is not only cost and energy-intensive but also environmentally risky due to the use of a toxic catalyst and high-pressure hydrogen gas. 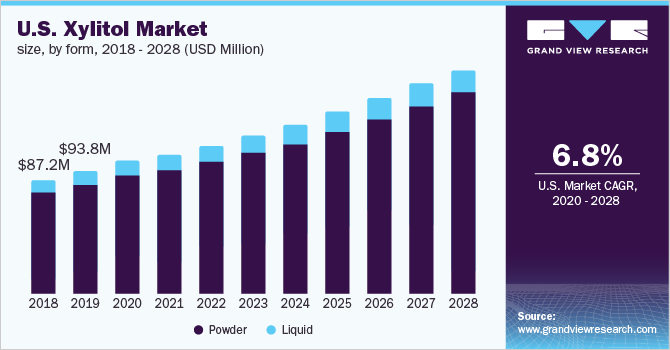 The U.S. is anticipated to witness a surge in product demand over the forecast period owing to the growing demand for low-calorie foods and ingredients. Moreover, the rising awareness about the natural products that play a key role in general health management is further accelerating the product demand in the U.S. market. The U.S. is among the leading producing countries of xylitol. The producers have been targeting various potential application industries, such as nutraceutical and cosmetics & personal care, to strengthen the market positions in the U.S. market.

In the enzymatic process, different microorganisms like yeast, bacteria, and fungi are used, which helps in a sustainable environment. Due to a low glycemic index sweetener, it is being used as a food additive in confectionery, bakery, drinks, and dairy products as well as in the nutraceutical and pharmaceutical industries. The most commonly used raw materials for the commercial production of xylose are corn cobs and birch barks. The production of xylose from corn cob is less expensive and thus the price of xylitol sourced from corn cob is lower than that of the one derived from the birch trees.

The hydrolysis of corn cob biomass uses hydrochloric acid whereas hydrolysis of birch bark requires sulfuric acid for hydrolysis. Xylitol produced from corn cob is considered pharmaceutical-grade and the standard is checked rigorously for compliance. On the other hand, birch bark-sourced product is considered as food-grade. Manufacturers located in North America focus on using birch bark as a key raw material owing to the abundance of birch trees in the region. Producers in China use corn cobs as a major xylan source.

On the basis of form, the market is bifurcated into powder and liquid. The powder form segment led the global xylitol market in 2020 with a revenue share of more than 90%. The effectiveness in various applications and easy availability, handling, and storability are the key factors responsible for the high demand for the product in powder form.

The powder form is majorly used in the manufacturing of chewing gums and anhydrous dietary supplements on account of its durability. It increases the shelf life of the final products due to less or no content of water. On the other hand, the liquid form segment will register the fastest CAGR from 2020 to 2028 on account of the low costs of liquid product form.

The oral care application segment is estimated to witness the fastest growth rate of 6.8% from 2020 to 2028. It decreases the incidence of dental caries by increasing salivary flow and pH, inhibiting the growth of harmful bacteria, and reducing plaque levels, inflammation, and tooth erosion. On the back of these factors, the oral care segment is anticipated to grow substantially over the forecast period. 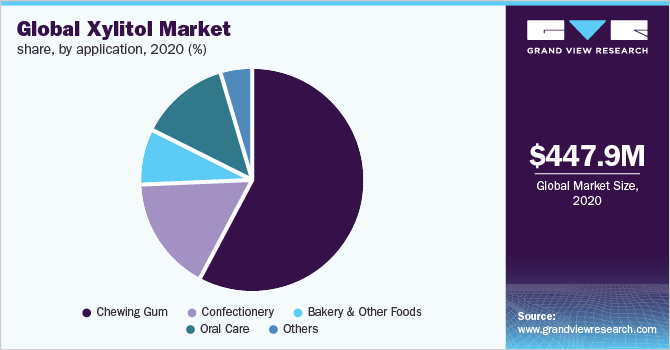 Xylitol has 40% fewer calories than regular sugar. A teaspoon of sugar contains 16 calories compared to a teaspoon of xylitol, which has 9.6 calories. It is used in chewing gum manufacturing as a sugar substitute due to its pleasant cooling effect. In America, Europe, and Asia chewing gums, mints, lozenges, and candies containing xylitol are widely available. It also has applications in bakery items, sauces, condiments, pharmaceuticals, and nutraceuticals.

Asia Pacific led the global market in 2020 accounting for the largest revenue share of more than 39%. China is the leading producer of xylitol, whereas China, India, and Thailand are among the leading consumers of xylitol in the region. It is one of the versatile natural sweeteners, which is widely used in chewing gums, nutraceuticals, and diabetic foods. China is the key exporter across the globe. The U.S., Europe, India, and other South Asia countries are the key export destinations for China in the market.

Europe is anticipated to witness the fastest CAGR of 7.0% over the forecast period. Finland is one of the top producers in the Europe regional market. The majority of the xylitol produced in Finland is exported to the neighboring European countries. The increasing demand for low-calorie foods from health-conscious consumers in the region is anticipated to boost the market growth in Europe over the forecast period.

The global market is characterized by the presence of several global and regional players. The production is concentrated in the U.S., China, and Europe. The market has a high potential for emerging and new players that require broad support across the value chain. The established, as well as new players, have been focusing more on robust brand management for targeting various application industries across the globe. Some of the prominent players in the global xylitol market include:

This report forecasts revenue growth at the global, regional, and country levels and provides an analysis of the latest industry trends in each of the sub-segments from 2017 to 2028. For the purpose of this study, Grand View Research has segmented the global xylitol market report on the basis of form, application, and region:

How big is the xylitol market?

What is the xylitol market growth?

Which segment accounted for the largest xylitol market share?

b. Chewing gum application accounted for the highest share of 57.72% in the xylitol market in 2020. This is due to the increasing demand for xylitol in the production of chewing gums, gummies, and medicated chews from the countries such as China, the U.S., and Western European countries.

Who are the key players in the xylitol market?

What are the factors driving the xylitol market?

b. Key factors that are driving the xylitol market growth include the commercial use of the product as natural sugar substitute which has increased significantly over the past few years owing to its advantageous properties.