The global zeolite market size was valued at USD 12.6 billion in 2021 and is expected to expand at a compound annual growth rate (CAGR) of 6.2% from 2022 to 2030. Increasing investments in expanding petrochemicals production coupled with growth in the detergents industry are anticipated to drive the market growth over the forecast period. Due to their stability, superior activity, and selectivity in conversion processes, zeolites are extensively used in the petrochemicals industry as a catalyst for accelerating chemical reactions. Also, owing to their high absorption capacity for liquid components, they are widely used in the production process of detergents. 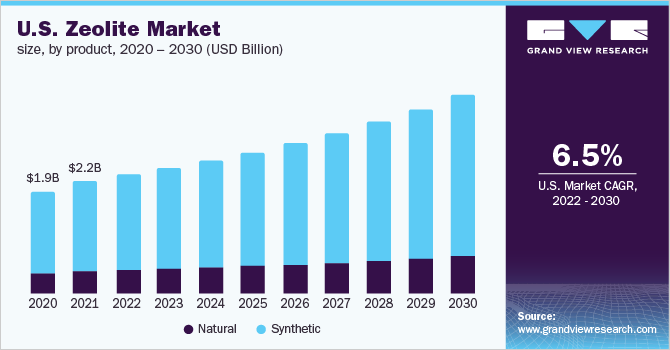 The U.S. was the largest market for zeolite in North America in 2021 and this trend is anticipated to continue over the forecast period. The presence of petrochemical facilities coupled with growth in the consumption of detergents, animal feed, water treatment, and agricultural products is expected to boost product consumption in the U.S. over the coming years. Growing investments in the U.S. petrochemicals industry are expected to facilitate the demand for synthetic zeolite as a catalyst. For instance, Chevron Phillips Chemical announced that it will make its Final Investment Decision (FID) on its new cracker in Texas in 2022, followed by another FID of USD 8 billion in a joint venture petrochemical complex along the US Gulf Coast in 2023.

Furthermore, Reliance Industries Ltd. and the Abu Dhabi National Oil Co. (ADNOC) have agreed to build a petrochemical plant worth USD 2.0 billion in the UAE. The collaboration will lead to the establishment of a new joint venture at Ta’ziz. Increasing investments in petrochemicals are anticipated to thus, augment product demand over the forecast period. The demand was, however, impacted in 2020 owing to coronavirus emergence. The petrochemicals industry was affected as countries implemented social and travel restrictions, and many plants faced temporary shutdowns. The petrochemicals demand was irregular across its value chain owing to varied intensities from end-use industries. This had a short-term impact on the global zeolite demand in the initial months of 2020.

The synthetic zeolites segment held the largest revenue share of over 87.0% in 2021. There are more than 200 known structures of zeolite that can be synthetically obtained in a laboratory. These are synthetically manufactured aluminosilicate minerals with a sponge-like structure, made up of tiny pores that make them applicable as catalysts or ultrafine filters. Furthermore, they can also be easily recycled. These are used in various industries including petrochemicals, water filtration, animal feed, and others. Since petrochemicals are used in innumerable products such as plastics, detergents, make-up products, solvents, shampoos, lubricants, and others, their production is expected to increase over the coming years, thus, positively influencing product demand.

In terms of volume, their natural counterpart dominates the market owing to their low cost. The construction industry is the major end-user of natural zeolites, wherein these are used in the production of construction materials such as dimension stone, lightweight aggregate, and pozzolanic cement. Increasing construction spending post-COVID-19 to boost economic recovery in various countries is anticipated to prove fruitful for market growth.

The catalysts segment held the largest revenue share of over 47.0% in 2021. Zeolites play an important role in enhancing the rate of reaction in fluid catalytic cracking and hydrocracking and thus, refinery expansion is expected to benefit segment growth. For instance, in November 2021, the Indian Oil Corporation announced increasing its capacity by 25 million tons per annum. The company is expected to increase its overall refining capacity from about 81 to 106 million tons per annum by 2023 - 24. 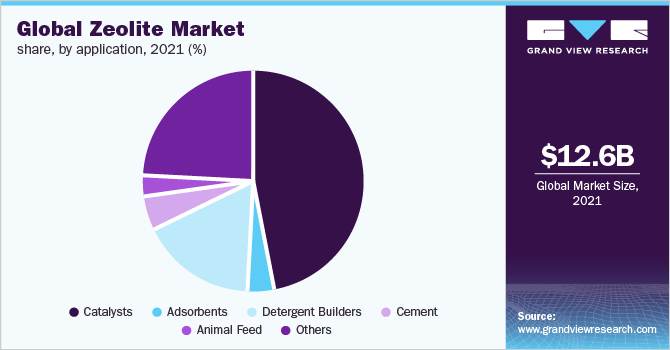 The detergent builders segment was the second-largest application segment of the market, in terms of revenue, in 2021. Synthetic zeolites are used to extract water hardness ions and soften the water medium for cleaning and laundry purpose. There has been a rising inclination toward the builder Zeolite-A in the detergent industry in recent years. The pandemic has augmented the demand for laundry detergents owing to the rising health consciousness among people, which has benefitted segment growth.

Natural zeolites can absorb around 50.0% of their weight in liquid without expanding. Because of the exceptional absorption capacity, these are added to many pet litters and even utilized for soil remediation. Also, they are used in water treatment applications where their ion-exchange property plays a pivotal role in the management of radioactive waste generated from nuclear reactors, gas purification, petroleum production, and wastewater treatment

North America dominated the market and held the largest revenue share of more than 22.0% in 2021. Growth in animal feed and petrochemicals production are the driving forces behind increasing product consumption in the region. The region ranked third in the global feed production in 2020, which was 237.2 million tons, which is 1% more than 2019. The U.S. and Mexico are among the top feed-producing countries in the world. In Asia Pacific, the market is anticipated to witness high growth owing to the development of new petrochemical plants, water recycling plants, demand for detergents, and rising cement and animal feed production.

For instance, in April 2021, Kumho Mitsui Chemicals Inc. announced an investment of USD 358.1 million for the expansion of its chemical manufacturing facility in South Korea. Furthermore, Lion Corporation is planning to expand its detergent production plants in Thailand and Myanmar, where the standard of living is rising steadily. The company has decided to invest USD 19.9 million in the construction of the new plants. In addition, the rise in large-scale construction projects in the region would lead to high demand for cement, thereby augmenting the zeolite market growth over the forecast period.

The development of oil refineries and petrochemical projects are facilitating the growth of the market in the Middle East and African countries. The region is focusing on expanding its petrochemical production as demand is expected to grow significantly due to an increase in the global population and growing middle-income groups. Also, it is expected that investments worth USD 120 billion would be directed to the petrochemicals industry in the Middle East and Africa by 2025.

The market is highly competitive with the presence of numerous players worldwide. Natural zeolite mining companies face intense competition not only from other zeolite mining companies but from companies engaged in substitutes production, for example, perlite, diatomite, and fuller’s earth. Key players are striving toward extending their market reach and increasing their customer base in the growing market. Aggressive R&D is one of the key strategies adopted by many key players. For instance, in April 2020, Metalsearch Limited, an Australian mineral and compound producer, has secured a license from UniQuest, the technology transfer company of the University of Queensland, for synthesizing zeolite. The technology will help the company to reduce the time and cost of manufacturing. Some of the prominent players in the zeolite market include:

This report forecasts revenue growth at the global, regional, and country levels and provides an analysis of the latest industry trends in each of the sub-segments from 2017 to 2030. For the purpose of this study, Grand View Research has segmented the global zeolite market report on the basis of product, application, and region:

What is the zeolite market growth?

Which segment accounted for the largest zeolite market share?

Who are the key players in the zeolite market?

b. Some of the key players operating in the zeolite market are Clariant, BASF, Albemarle Corporation, KMI Zeolite, and ROTA MINING CORPORATION among others.

What are the factors driving the zeolite market?

b. Increasing investments in petrochemicals production and detergents are the growth drivers for the zeolite market.

How big is the zeolite market?

The sudden rise of COVID-19 to a pandemic level has severely impacted the demand patterns of cosmetics and also certain categories of personal care products. Furthermore, policies across the globe restricting the movement of people have also led to disruptions in the supply of personal care products. The availability of e-commerce platforms during these times has, however, offset the disruptions caused in the last-mile supply of customer purchases. From manufacturing stand, production stoppages due to the pandemic shall cast considerable stress on operational costs. The report will account for COVID-19 as a key market contributor.