The global ammonia market size was worth USD 45.50 billion in 2019 and is expected to expand at a compound annual growth rate (CAGR) of 7.8% from 2020 to 2025. The rising demand for ammonia in the fertilizer industry is expected to boost industry growth. The product is also the building block for the world nitrogen industry.

Ammonia is a colorless and highly irritating with a sharp suffocating odor gas. It easily dissolves in water and forms an ammonium hydroxide solution. The solution can cause burns and irritation. The gas can be easily compressed, which forms a colorless & clear liquid under pressure. It is usually transported in steel cylinders in the form of compressed liquid. Moreover, it is not highly combustible but may explode when exposed to high heat. 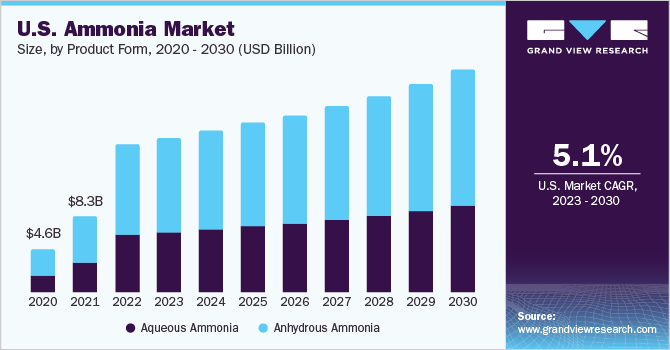 The U.S. market was valued at USD 2.95 billion in 2019 and is predicted to ascend at a CAGR of 7.7% from 2020 to 2025. The country is among the major producers of the product. Globally, the demand & supply ratio of the product is anticipated to move toward surplus, as the capacity addition is continuing to outpace consumption, resulting in declining utilization rates. This capacity addition is mostly increasing in the regions where the production cost is low and availability of the raw material, i.e. natural gas is high, especially in the Middle East and the U.S.

Commercially, it is manufactured by the Haber-Bosch process. The process involves a direct reaction between elemental nitrogen & hydrogen in the presence of high temperature, catalyst, and elevated temperature. Several types of catalysis can be used in the process such as iron oxide, aluminum oxide, and magnesium oxide. In the laboratory, it is synthesized by the hydrolysis of a metal nitride.

The major driver for the growth of ammonia market is the increasing agricultural activities across the globe. Plants constantly require the necessary nutrients such as potassium, nitrogen, magnesium, calcium, and sulfur in order to grow strong. The amount of these nutrients differs from plant to plant depending upon its type, location, and size. Ammonia is considered to be a prominent source of such nutrients and thus, it is extensively used as fertilizers. According to Mineral Commodity Summaries, 88% of total ammonia was used as fertilizers in the U.S. in 2020. This percentage is likely to ascend in the forthcoming years on the account of increasing dependency of farmers on ammonia for excessive crop yield.

Nitrogen is the prime nutrient required by plants to grow strong and maximize the crop yield. However, nitrogen stays in the form of gas and it is not usable for chemical or biological purposes. Nitrogen is made usable by the technique called Haber-Bosch process, which captures nitrogen from the air and converts that into the form of liquid which can be consumed by plants. The nitrogen (N) is considered to be on a high level in Ammonia, which can be applied directly to soil or transformed into a variety of N fertilizers.

Generally, ammonia is consumed in the form of liquid in all the major applications performed by the chemical. Textile is one of the applications where ammonia plays a vital role. Mostly, ammonia is used to give the finishing touch to cotton made fabrics in textile industry. In addition, ammonia is highly soluble with any liquid and thus, it has the property of allowing fabric to obtain any color. The increasing consumption of textiles products coupled with government initiatives to support the textile business is likely to lead to the ammonia market growth over the forthcoming years.

Ammonia is highly regularized by the government regarding its use. Thus, its price varies country to country, however, ammonia products are costly owing to the complex manufacturing process involved. In addition to that, the overcapacity of ammonia manufacturers is acting as a barrier in the market growth. The factories are not able to produce as much as they are designed to produce. This factor is leading to the uncertainty in the pricing and is likely to descend the market growth of ammonia over the forecast period.

The multinationals in ammonia industry are taking several initiatives to become 100% sustainable. The companies have released their green ammonia objectives, where the goal is to reduce the carbon emission and minimize its effect to the environment. With the traditional method, one tonne of ammonia emits over two tonnes of carbon, whereas, the green carbon method is likely to reduce the carbon emission to zero. This initiative is expected to lead to the regulatory relaxation from the government and open immense opportunities for the market growth for ammonia in the coming years.

On the basis of product form, the industry can be segmented into gas, liquid, and powder. The liquid form of the product dominated the market, in terms of revenue, with over 45% share in 2019. The segment is expected to ascend at a CAGR of 8.3% from 2020 to 2025. The rising demand for the product in the end-use application is expected to boost the ammonia market over the forecast period.

Anhydrous ammonia is the purest form of ammonia, which does not contain any water molecule. It is a pungent gas with suffocating fumes, which is primarily used as a fertilizer. It is compressed into a colorless and clear liquid when used as an agricultural fertilizer. It is manufactured from three parts of hydrogen and one part of nitrogen. The compound is readily used in its diluted form in industrial cleaning and in the manufacturing & synthesis of some molecules.

Ammonia is mostly used in the liquid form. It is majorly used in fertilizers and industrial & household cleaning. For application in fertilizers, it is compressed into a liquid and then mixed with different plant enhancers. In the gaseous form, it combines with moisture present in the dirt, which in turn results in ammonia-enriched fertilizer soil.

Ammonia is primarily used in the agricultural industry in the form of fertilizers. The fertilizer application segment dominated the global market with over 40% share in 2019. It is considered as a major source of nitrogen, which is an essential element for plant growth. It is also used in the manufacturing of various liquid fertilizer solutions that consist of ammonium nitrate, aqua ammonia, and urea.

Ammonia is readily used in the agricultural application as it rapidly reacts with clay particles, organic matter, free hydrogen ions, and soil water (that prevent the volatilization of ammonia). The rate of application, soil texture & structure, and the method are the factors that enhance the use of ammonia in the segment. 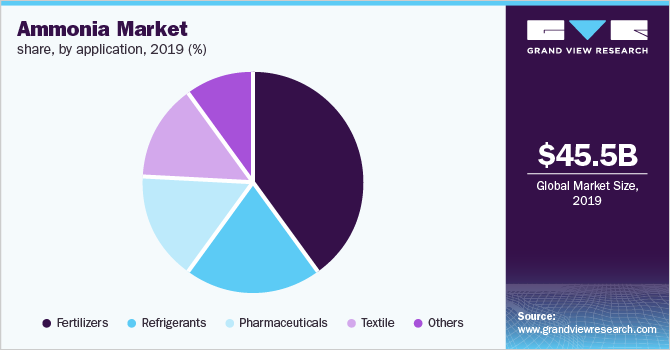 With an increasing focus on energy consumption systems, ammonia refrigeration systems are a sustainable and safe option. It belongs to the group of natural refrigerants and is considered as the most environmentally-friendly refrigerant. It has zero Ozone Depletion Potential (ODP) and Global Warming Potential (GWP). Ammonia also has better heat transfer properties in comparison to other chemical refrigerants. This allows the usage of refrigerant equipment in a smaller heat transfer area, which results in lower plant construction costs and operating costs of the system. Ammonia as a refrigerant is mainly used in heavy commercial and industrial applications.

Asia Pacific was the major producer and consumer of ammonia in 2019. China is the largest producer of the product and the country’s market is anticipated to ascend at a CAGR of 6.3% from 2020 to 2025. In China, ammonia is mostly produced from coal gasification, whereas globally it is mostly obtained from natural gas. In terms of production, China is followed by India and Indonesia. Globally, the capacity is anticipated to increase significantly. The major capacity addition is projected to be in the Middle East & Africa, Central & South America, and Southeast Asia. The largest addition is anticipated to be in Indonesia and China. 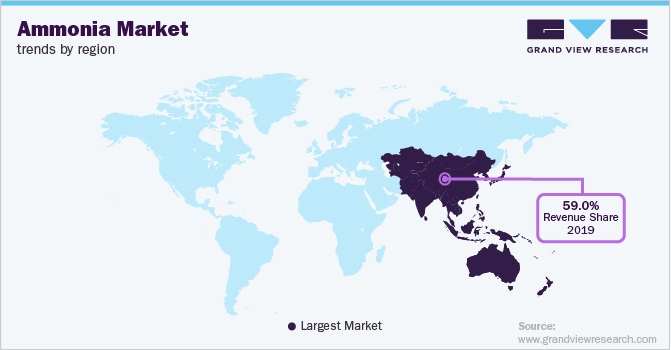 Asia Pacific is recognized as the largest and fastest growing market for ammonia and dominated the global market with a share of 58.3% in 2017. This growth is attributed to the presence of various global players along with the upscaling demand for agricultural products in the region. China and India are considered as top players in ammonia industry in the region. These countries along with Indonesia are adding up to the market growth for ammonia in the region.

The industry is witnessing continuous fall in prices from the past two years on a global level. This is mainly due to the increasing supply and demand gap in the region. The rising supply owing to increasing capacity and weaker demand is the major reason for the gap in the market. This weaker demand is due to lower crop & food prices, poor economic prospects, fluctuating energy prices, and rising competition.

China is the largest producer as well as consumer of ammonia globally. In Asia Pacific, China captures over 50% of market share. The growth is driven by the continuous production and consumption of ammonia in a large scale in the country. China is rapidly growing in terms of production capacity owing to the increasing number of manufacturing plants across the country. In December 2021, KAPSOM inaugurated a new 600KTPY ammonia plant in Shandong, China. The company invested over USD 650 million on the project and expecting to recover the cost within four years. Such growth plans by the companies in China is likely to contribute to the market growth for ammonia over the forecast period.

The U.S. is among the major producers of ammonia globally. The country had over 13 companies that produced the product at their 20 production plants in 2015. In the U.S., approximately 45% of the product is consumed in nitrogen fertilizer and the remaining is used for producing synthetic fibers plastics, resins, and various other chemical compounds. As the natural gas accounts for around 50% of the production cost for nitrogen fertilizer, the availability of cheap natural gas in the country is expected to be a major driving factor for industry growth in the region.

This report forecasts volume and revenue growth at the global, regional, and country levels and provides an analysis of the industry trends in each of the sub-segments from 2014 to 2025. For the purpose of this study, Grand View Research has segmented the global ammonia market on the basis of product form, application, and region. 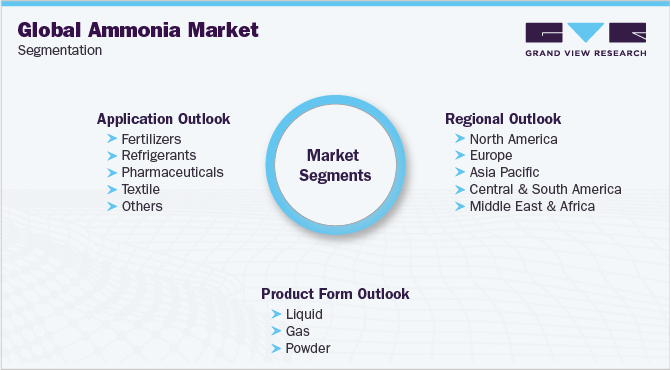