The global animal genetics market size was estimated at USD 6.11 billion in 2018 and is anticipated to grow at a CAGR of 4.9% over the forecast period. Factors such as increasing population & rapid global urbanization and growing preference for animal protein & adoption of various genetic services are the key market growth drivers. Moreover, rising adoption of progressive genetic practices, including Artificial Insemination (AI) and embryo transfer, for large-scale production of modified breeds is likely to boost growth shortly. 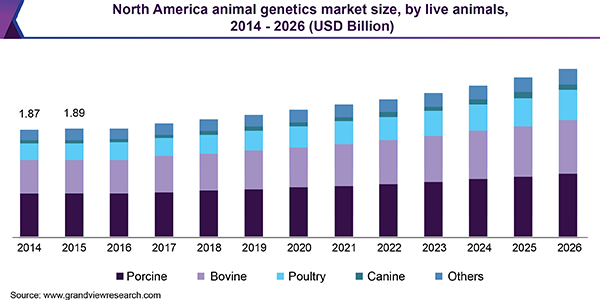 Animal genetics is focused on inheritance and genetic variations in wild and domestic animals. At a commercial level, this science is used for services such as genetic disease testing, genetic trait testing, and DNA typing. This practice uses ontogenetic, hybrid population, and cytological studies for defining genetic hybridizations.

As per a study by Meat and Livestock Australia in 2015, Genetically Modified (GM) cow produced more milk and was less susceptible to various common cattle diseases, such as bovine respiratory disease complex & clostridia disease, effectively resulting in high overall profit for cattle farmers.

Furthermore, increased adoption of advanced genetic technologies and implementation of the animal welfare regulations are anticipated to drive the market in near future. Similarly, an increase in livestock population and awareness about animal genetic disorders, to meet unmet demands for animal proteins, is further fueling growth. However, stringent regulations concerning animal genetic engineering, high cost of animal testing, and lack of skilled professionals limit the market growth.

Rise in R&D initiatives by scientists in an attempt to produce healthier food and milk products from livestock animals by genetic modifications is another factor aiding market growth over the forecast period. According to a publication by the British Nutrition Foundation 2018, genetically modified cows were expected to produce milk without allergy-producing protein, which will make the product suitable for lactose-intolerant people. According to the National Institute of Health, 2017, almost 8% of the population in the U.K. was suffering from lactose intolerance. Hence, the modifications are expected to provide newer opportunities for animal genetics in the coming years.

Based on live animal genetic materials, the porcine segment held the largest share in 2018. This largest share can be attributed to various factors, such as a large consumer base for pork meat and its products, as well as growing penetration of advanced genetic research. Furthermore, the segment is also expected to grow due to environmental factors such as comparatively limited land requirements and the low need for maintenance of animals.

Increasing the shift toward white meat consumption is a major factor leading to higher growth in the poultry segment. Furthermore, pocket-friendliness and low rate of food-related disease transmissions are the major factors propelling genetic research in the poultry segment. Rising government efforts to reduce environmental effects and create awareness in the European countries have led a consumer shift from red meat toward white meat. This shift is expected to create new opportunities for animal genetics to boost white meat production to meet the growing demand.

Based on genetic material, the embryo segment held the largest market share in 2018 and is expected to maintain its position during the forecast period. The high segment revenue can be attributed to the higher efficiency of the embryo compared to semen. Embryo transfer in cattle is primarily done to amplify reproduction rates. The cost of importing the embryos is often lower as compared to semen and postnatal animals, and embryo makes it possible to change the breed of the entire herd within a single generation.

On the other hand, the semen segment is expected to grow at the fastest CAGR during the forecast period. This high growth can be attributed to increasing adoption of semen sexing and AI for cattle, sheep, pigs, and goats breeding.

Based on services, the genetic disease test segment is anticipated to grow at the highest rate during the forecast period. This growth can be attributed to the growing adoption of genomic tests to prevent financial losses and loss of live animal productivity, in the case of farm owners. DNA typing and parentage testing is the most common service provided by animal genetic companies. 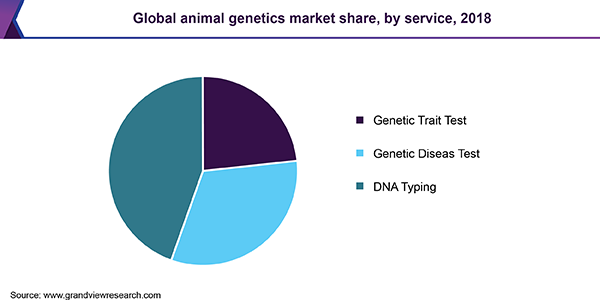 Growing pet ownership is a major factor leading to the market growth of the genetic disease testing segment. Genetic trait tests, such as tests for coat color, and parentage tests are expected to rise with increasing pet population. Furthermore, genetic disease tests in livestock animals are also expected to grow during the forecast period, to ensure disease-free breed of animals.

North America is the largest shareholder in the animal genetics market, owing to high research on animal genetics and the adoption of strategic activities by industry players, such as acquisitions. For instance, Neogen, in 2018, completed the acquisition of Livestock Genetic Services-a firm involved in data management and genetic evaluations for cattle breeding organizations. The acquisition helped the company expand its genetic evaluation capabilities.

Europe held the second-largest market for animal genetics, majorly due to rising awareness about animal wellbeing and increased expenditure on veterinary services. As per a European Pet Food Industry Federation 2017 publication, more than 75 million households own a pet in the region.

The Asia Pacific region is likely to grow with a higher CAGR over the forecast period. The rise in animal care services, both at veterinary hospitals and community-level centers, is anticipated to lead to market growth. The MEA accounts for the least share due to a lack of well-trained healthcare professionals and low per capita income. There is a growing demand for efficient tests and other genetic services for testing genetic diseases in animals in this region, which is expected to aid the adoption of animal genetics in the coming years.

Leading players are involved in the development of new live animals, collaborations, mergers & acquisitions, and regional expansion to gain revenue share. The development of a disease-resistant breed helps companies expand their existing portfolio and geographical reach. For instance, in May 2019, Genus collaborated with Beijing Capital Agribusiness (BCA) in China. BCA is anticipated to help the company apply its patented technology to develop Porcine Reproductive and Respiratory Syndrome Virus (PRRSV)-resistant animals.

This report forecasts revenue growth at global, regional, & country levels and provides an analysis of the latest industry trends in each of the sub-segments from 2014 to 2026. For this study, Grand View Research has segmented the animal genetics market report based on live animals, genetic materials, services, and region:

How big is the animal genetics market?

What is the animal genetics market growth?

Which segment accounted for the largest animal genetics market share?

b. North America dominated the animal genetics market with a share of 33.49% in 2019. This is attributable to high research on animal genetics and adoption of strategic activities by industry players.

Who are the key players in animal genetics market?

What are the factors driving the animal genetics market?