The global floating solar panels market size was estimated at USD 13.8 million in 2015 and is expected to witness significant growth over the forecast period owing to the increasing penetration of the technology in major countries including Japan, UK, China, and Brazil. 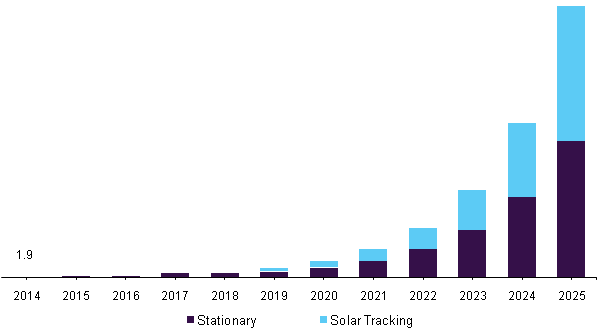 The rapid depletion of fossil fuel reserves has created a need for the utilization of renewable sources of electricity generation. Solar power is one of the fastest growing renewable energy technology owing to the ease in system installation as well as abundant sunlight across the globe. Advantages related to the installation of floating panels as compared to conventional plants are expected to drive growth.

The adoption of floating panels in Japan is high, as the country is densely populated with low land availability for installation of solar energy plants. Furthermore, lack of natural resources coupled with high dependence of the country on renewable power generation for meeting its energy requirements is expected to propel market growth.

The technology is expected to foresee abundant growth over the forecast period on account of rapid demand primarily in Asia Pacific. Rising installations in China and Japan coupled with upcoming commercial projects in India is likely to fuel growth over the projected period.

The demand for floating panels in countries prone to drought is expected to witness significant growth over the forecast period as the installation of these systems on water bodies decreases the evaporation rate and slows down the algal growth rate, which in turn maintains the water purity.

The demand for stationery panels accounted for over 90% of the overall revenue share in 2015 owing to cost benefits associated with the technology as compared to its counterparts. The installation cost of stationery floating systems is lower as compared to the tracking technology owing to the use of inexpensive and high strength plastic in its construction. 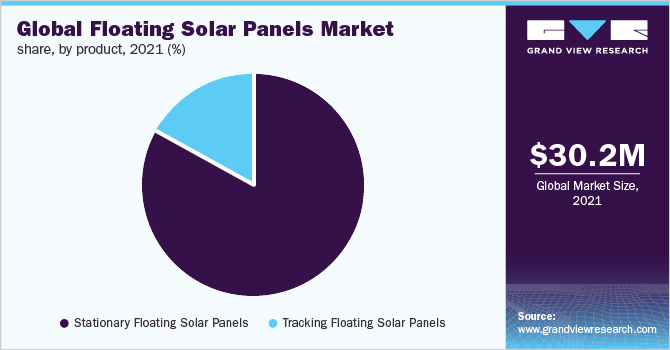 The increasing investments of the panel manufacturers and installers in developing a durable, stable and reliable solar tracking technology with low maintenance cost is expected to trigger the demand over the forecast period. Tracking panels are highly efficient owing to its ability to track the sunlight, which improves the operational efficiency of the system.

Rising penetration of tracking technology in floating solar plants owing to superior operational efficiency is likely to have a positive impact on demand. However, high maintenance as compared to stationary plants owing to moving parts is expected to restrain growth over the projected period.

The penetration of the floating solar panels is high in Japan owing to the low availability of land coupled with limited reserves of fossil fuels. As a result, the government has sanctioned numerous plans of floating systems to meet the increasing consumption of electricity with low harmful effects on the environment.

The market is expected to grow in developed countries like the U.S., Canada, France, and Germany owing to regulations promoting the use of solar energy for electricity generation. Furthermore, factors including land availability as well as the ability of floating solar technology to decrease the impact of evaporation is expected to propel demand. The installation of floating solar plants decreases the evaporation rate of water, which in turn aids in decrease the possibility of drought in regions with high temperatures such as central states of the U.S.

The key strategies adopted by the major industry players include product innovation and research & development initiatives. The major players include Trina Solar, Wuxi Suntech Power Co., Ltd., Kyocera Corporation and Yingli Solar. Kyocera is the biggest market player among these major players owing to the global presence and a large number of distributors.

Ciel & Terre is the biggest installer in the market. The company operates in almost all parts of the world with sales offices present in major countries and cities. The company has installed more than 50% of the total number of plants present across the globe. In addition, the company is the most active player in the market with up to date technological solutions.

This report forecasts revenue growth at global, regional & country levels and provides an analysis on the industry trends in each of the sub-segments from 2014 to 2025. For the purpose of this study, Grand View Research has segmented the floating solar panels market on the basis of product and region: