The global furfural market size was estimated at USD 814.6 million in 2019 and is expected to grow at a compound annual growth rate (CAGR) of 5.0% from 2020 to 2027. The rising importance of bio-based solvents as a consequence of increasing environmental concerns is anticipated to boost the product demand in solvent applications over the forecast period. 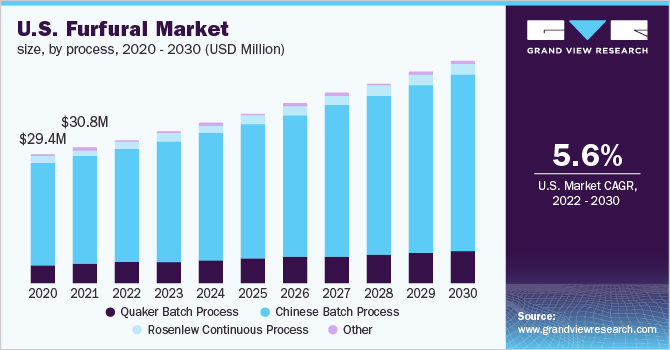 Furfural is broadly used as a solvent or intermediate in several end-use industries, including foundry, agriculture, paints & coatings, pharmaceuticals, refineries, chemicals, automotive, and construction. The growing construction sector is projected to supplement the demand for the product in several refractory materials including ceramics, bricks, and fiberglass composites over the forecast period.

In addition, surging demand for sustainable products due to the depletion of fossil fuel resources is estimated to drive the demand. At present, furfural production is characterized by outdated manufacturing technologies, high steam usage, and high acid consumption, which lead to considerably low product yield or output.

As a result, many companies are focusing on the development of new processes to decrease the overall energy consumption and upsurge the product yield during the purification step. Manufacturers are inclined toward using a combination of the most effectual biomass to chemical techniques occasioning in a significant decline in operational costs.

In 2019, Chinese batch was the dominant process segment and held a market share of over 81%. This process is majorly used in China, which is the largest manufacturer across the globe. Quaker batch process is one of the oldest manufacturing processes, while others are modified versions of the former processes. The major difference between the Quaker batch and Rosenlew continuous processes is that the former uses sulfuric acid as a catalyst, while the latter does not require a separate catalyst.

Rosenlew continuous process is the simplest of all, has trouble-free operation characteristics, and needs comparatively less maintenance. However, this process is not preferred by small- and medium-scale manufacturers as it uses a large quantity of steam, and the production yield is low, thereby resulting in high production cost. The majority of the manufacturers prefer the Chinese batch process as it is inexpensive.

Corncobs raw material segment led the global market with a share of over 73%. It is estimated to retain its dominant position throughout the forecast years due to the extensive use of the raw material in the production of furfural. The yield from corncob is the maximum, thus, marking corncob the most desirable raw material for production. In addition, corncob, when used as a biomass feedstock, delivers promising opportunities for renewable energy creation.

Sugarcane bagasse is a significant agro-industrial byproduct. Large quantities of sugarcane bagasse are easily accessible at low cost in several sugarcane-processing manufacturing facilities, including sugar mills and independent distilleries. Sugarcane production in Brazil, India, China, Thailand, and Pakistan is high, resulting in abundant availability of bagasse in these economies. Furthermore, a gas-fired boiler in sugar mills can be used to increase the production of bagasse to obtain it as a raw material for production. The storing of bagasse is expensive and complicated, so a furfural unit must be positioned near a sugar mill.

In terms of revenue, refineries dominated the market with a share of 50.5% in 2019. This high share is attributable to its high consumption as a solvent in petroleum refining, specialist adhesives, and lubricants.

Furfural is extensively applied as insecticide, nematicide, and fungicide in the agrochemical industry. It is an active ingredient in various nematicides such as crop protectors or crop guards. The product is also used as a weed killer in horticulture. It is a contact nematicide, mechanically incorporated or moved into the soil during irrigation, and used in reasonably low concentrations. As an agrochemical, it is comparatively harmless and easy to apply.

Furfural is used as an intermediate in the synthesis of pharmaceuticals and as an essential fragment of pharmaceutical building blocks. The product is recorded as an active ingredient in veterinary products in Drug Products Database. Expanding the pharmaceutical sector, especially in Europe and Japan due to growing production and high investments, is expected to drive the demand for the product in several health products in the near future.

Furfuryl alcohol emerged as the leading application segment in 2019 accounting for a share of over 85%, as it is predominantly used as a binder in the foundry industry. Furfuryl alcohol is primarily used for the synthesis of furan resin, which is a substantial chemical feedstock used in the production of adhesives, casting resins, thermoset polymer matrix composites, coatings, and cement. Furfuryl alcohol, which is considered as an organic chemical, is also used as a solvent in the petroleum & refining industry. 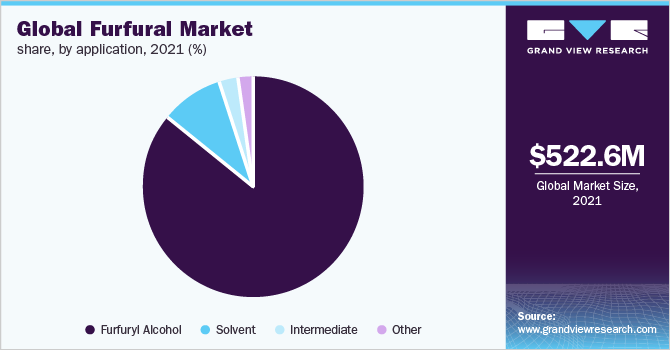 Solvent emerged as the second-largest application segment. Increasing use of furfural as a selective solvent for refining rosin and lubricating oils is projected to drive the product demand further. It is also used as a solvent in the extraction of mineral oils and as a wetting agent in the production of refractory products, brake linings, and abrasive wheels. In addition, it removes dienes from several other hydrocarbons in nylon and plastic. Mounting demand for the product in solvent applications including, butadiene extractions and lubricating oils, is projected to trigger segment growth in the near future.

The Asia Pacific emerged as the dominant region with the market share of over 76% in 2019. This is attributable to the high production of furfural in the region, especially in China, and growth in several end-use industries including agriculture, food & beverage, pharmaceutical, and refinery. Asia Pacific market is also projected to witness the fastest CAGR from 2020 to 2027 on account of the rising product demand from the chemical and foundry industries.

In 2019, China emerged as the dominant market in the Asia Pacific. Product consumption in China is driven by its high demand, along with the growing production of furfuryl alcohol. The market in China is led by many small-scale manufacturers that collectively account for the majority of the market share. Key manufacturers in the country use corncobs as a primary feedstock and the Chinese batch process for product manufacturing. China also accounts for more than 80% of global production.

Europe's market growth can be attributed to the development of the food & beverages and the pharmaceutical sectors over the last decade. Furfural is observed to be manufactured mostly in the economies of Austria, Slovenia, Italy, and Germany, which are further imported by other countries in the region. In Europe, the product is utilized as a flavoring ingredient in various food products, including frozen dairy, baked goods, gravies, candies, meat products, beverages, and puddings. The growing inclusion of furfural in meat products, baking and beverages, growth of the food & beverage sector in Germany, along with the growing bakery sector in Italy and France, are projected to fuel the growth of the market in the near future.

Furfural market is moderately fragmented with a large number of small- and medium-sized manufacturers, which account for a majority of the global share. Manufacturers involved in the market are integrated across the value chain. The leading companies are well-equipped with large manufacturing facilities and are engaged in several research & development activities. Illovo Sugar Africa (Pty) Ltd. is integrated across the value chain. The company uses its sugarcane bagasse for production and also manufactures furfuryl alcohol. Some of the prominent players in the furfural market include:

This report forecasts revenue growth at global, regional, and country levels and provides an analysis of the latest industry trends in each of the sub-segments from 2016 to 2027. For the purpose of this report, Grand View Research has segmented the global furfural market report on the basis of process, raw material, application, end use, and region: