The global geriatric medicine market was valued at nearly USD 540 billion in 2015. One of the key factors attributing to its rapid growth includes rapidly increasing geriatric population base. According to the estimates published by the United Nations in 2012, the global geriatric population was estimated to be nearly 809.4 million, and is anticipated to reach nearly 1.13 billion by 2022 and exceed a value of over 2 billion by 2050.

Furthermore, the rising prevalence of various target diseases, decreasing immunity levels, and the significant improvements in the healthcare systems across the globe are significantly driving the market growth. 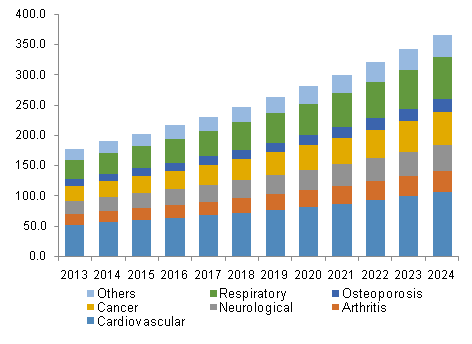 The geriatric population base exhibits conditions like high cholesterol levels, low immunity levels, and high blood sugar levels, which contribute significantly to the increasing prevalence of target diseases such as hypertension, coronary heart disease, stroke, diabetes, neurological disorders, and others.

The global geriatric medicine market is segmented based on the therapeutic categories into analgesics, antihypertensives, statins, antidiabetics, proton pump inhibitors, anticoagulants, antipsychotics, and antidepressants. Pain as a symptom is associated with advancing age and the geriatric population exhibits a high prevalence rate of pain syndromes. Based on these observed trends, the market is expected to witness high growth over the forecast period.

In 2015, analgesics accounted for the largest share of more than 20% and are expected to dominate the market over the forecast period. Escalation in prescription sales for pain management, the expansion of OTC (over the counter) sales, and the growth in the generics market are some of the key factors expected to strengthen the growth of analgesics over the next seven years.

However, the antidiabetic segment is expected to witness the maximum CAGR of 7.08%.The diabetes disease burden in the elderly age group is expected to increase on account of lifestyle-related risk factors such as low physical activity, smoking, alcohol consumption, obesity, and high cholesterol levels.

The global geriatric medicine market is segmented on the basis of the therapeutics used for varied conditions, such as cardiovascular diseases, arthritis, neurological disorders, cancer, osteoporosis, and respiratory diseases. In 2015, the cardiovascular diseases segment generated the maximum revenue of over 160 billion owing to the high proliferation of various cardiac diseases such as hypertension, coronary artery disease, stroke, and others.

On account of the increasing exposure to various carcinogenic agents, the decline in immunity levels, and the rise in the number of genetic mutations the cancer is expected to gain its market share over the forecast period. By 2022, cancer is expected to emerge as the fastest-growing category, expected to grow at a CAGR of nearly 7% from 2016 to 2024.

In 2015, North America held the largest revenue share of nearly 38% due to the presence of a large geriatric population in the region. The presence of advanced healthcare facilities, a well-developed reimbursement scenario, and the improved access to important life-saving medicine has significantly boosted the average life expectancy rates in this region.

Moreover, the number of people surviving post 65 to 70 years suffering from various target diseases is increasing constantly and this factor is expected to act as a high impact rendering driver for the market expansion over the next seven years.

Asia Pacific is expected to witness the maximum CAGR of nearly 7.5% over the forecast period. The key factors attributing to this high growth include significant improvements in the healthcare facilities in the region, the launch of several patented and generic drugs, an increase in public and private healthcare expenditure, the rise in disposable incomes, and the growth of the elderly population in countries such as Japan, China, and India.

Moreover, Asia Pacific is emerging as one of the key medical tourism destinations, and therefore the influx of a high number of patients for various treatments is expected to provide an impetus to the market expansion over the forecast period.