The global laparoscopic devices market size was valued at USD 6.5 billion in 2020 and is expected to expand at a compound annual growth rate (CAGR) of 6.7% from 2021 to 2028. Increasing adoption of minimally invasive surgeries over the traditional methods, increasing prevalence of colorectal cancer, increase in the number of laparoscopic bariatric procedures, and other surgery-related technological advancements are among the major factors driving the market. 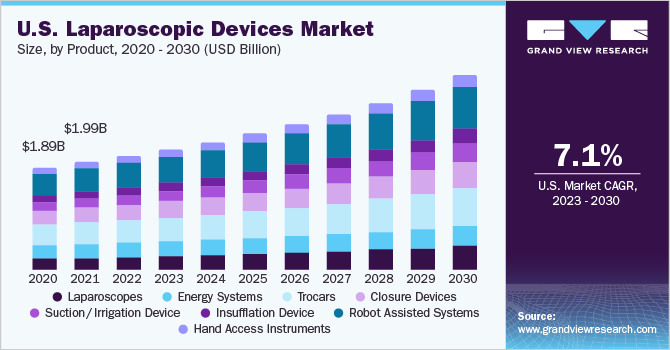 The COVID-19 pandemic is affecting significant aspects of various companies, such as product demand, operations, supply chains, distribution systems, and the ability to research and develop new products. Almost all the companies are affected by reduced procedure volumes due to COVID-19, as all hospital resources are being diverted to fight the disease. Many healthcare settings along with the government agencies are postponing deferrable and semi-deferrable surgeries, reducing demand for products being manufactured by the companies.

Minimally invasive surgical procedures are being increasingly adopted due to lower trauma associated with them. Small incisions decrease postoperative pain and facilitate speedy recovery, leading to high adoption of these procedures, which is driving R&D in this field. In addition, minimally invasive laparoscopic surgeries are being covered by health insurance providers in selected countries. For instance, Medicare now covers up to 75.0% of laparoscopic operations, as listed in the Medicare Benefits Schedule (MBS). These factors have led to increased preference for minimally invasive surgeries by patients.

According to a study published in NCBI, colorectal cancer is the fourth most common cancer and the second main cause of cancer-related deaths in the U.S. The risk of colorectal cancer increases with age, as it is commonly diagnosed in people aged 65 to 74 years. As per WHO, the global population of 65 years and above is expected to rise from 7% in 2000 to 16% in 2050. Similarly, according to the American Society of Nephrology, urologic diseases are the third most common concern among the geriatric population, and these account for approximately around 47% of the physician visits. Thus, the increasing geriatric population is expected to be one of the significant drivers for the market.

The increasing incidence of obesity across all age groups is one of the major factors that can be attributed to the growth of the market over the forecast period. Obesity or overweight are major health concerns, which lead to several associated diseases or complications, such as diabetes, cardiovascular diseases, and cancer. For instance, as per the WHO, in 2016, more than 1.9 billion adults were overweight, out of which, around 650 million people were obese. These factors are expected to increase the demand for bariatric procedures. Moreover, according to an International Diabetes Federation 2019 report, approximately 463.0 million people were living with diabetes globally. As the prevalence of obesity is increasing, the number of bariatric surgeries is also likely to increase, which is expected to directly drive the market.

In 2020, the energy systems segment dominated the market and accounted for the largest revenue share of 21.9%. The insufflation device segment is expected to witness the highest CAGR of 7.9% during the forecast period. On the basis of product, the market is segmented into laparoscopes, energy systems, trocars, closure devices, suction/irrigation devices, insufflation devices, robot-assisted systems, and hand access instruments.

The general surgery segment dominated the market and accounted for the largest revenue share of 20.3% in 2020. The application of trocars in general surgery, especially in laparoscopic surgery, has increased to a great extent in recent times. Most surgeons prefer to use trocars as it allows a clear, detailed view of tissues without the use of cameras and other handheld surgical instruments. In addition, there is a low risk of developing a postoperative infection, with lesser healing time, compared to traditional open surgeries. Moreover, increasing reliance on laparoscopic surgery globally may also significantly boost the usage rate of trocars. These factors are expected to propel this segment’s growth during the forecast period.

The increasing incidence of obesity in adults due to changing lifestyle habits and excessive intake of calories is the major driver for this segment’s growth. For instance, according to CDC, from 1999–2000 through 2017–2018, obesity prevalence increased from 30.5% to 42.4% in the U.S., whereas severe obesity prevalence increased from 4.7% to 9.2%. In addition, around 13.0% of the population (aged 18 and above) are obese and 41.0 million children under the age of 5 years suffer from obesity.

The hospital segment dominated the market and accounted for the largest revenue share of 61.6% in 2020. However, the ambulatory segment is expected to grow at the highest CAGR of 7.1% during the forecast period. Based on end-use, the market is segmented into hospitals, clinics, and ambulatory. 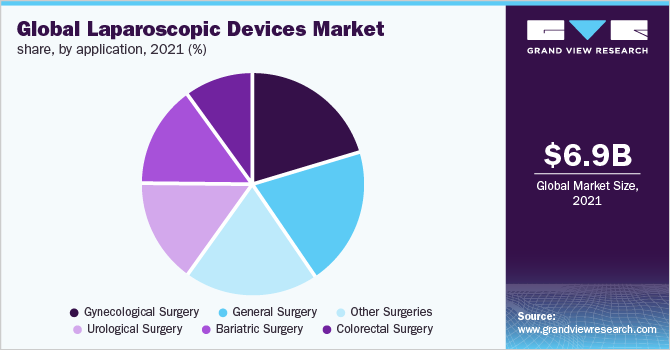 Hospitals offer superior care to patients and provide reimbursements for certain procedures, which is contributing to this segment’s growth. Furthermore, hospitals are currently advancing in terms of technology. Technologically advanced devices are being used extensively in hospitals to provide better treatment. These devices are not only simplifying treatment procedures but also providing better, faster, and accurate results. Hospitals also witness a significantly high inflow of patients for bariatric surgeries or other laparoscopic procedures as compared to other healthcare settings, owing to ease of handling any emergencies that may arise during surgical procedures and availability of a broad range of treatment options in such facilities. For instance, according to the American Society for Metabolic and Bariatric Surgery, in 2019 alone, 256,000 people in the U.S. underwent weight-loss surgery. Thus, the aforementioned factors are expected to drive the hospital segment’s growth.

The ambulatory segment is expected to grow at a significant pace in the market over the forecast period. High preference for outpatient surgeries, increase in the adoption of minimally invasive surgeries, and cost-effectiveness of ambulatory surgery center-based laparoscopic procedures are key factors responsible for the lucrative growth of this segment.

North America dominated the market and accounted for the largest revenue share of more than 34.6% in 2020. This growth can be attributed to the increasing incidence of chronic diseases such as diabetes and cancer, supportive government policies, and growing awareness.

Growing awareness about the benefits of minimally invasive surgeries and laparoscopic procedures in the U.S. is anticipated to aid the growth of the market. In addition, increasing healthcare expenditure may also favor the entry of both new and old players. For instance, as per the Centers for Medicare and Medicaid Services, U.S. health care spending increased by 4.6% and reached USD 3.8 trillion in 2019, accounting for approximately 17.7% of the GDP. The National Health spending is expected to grow at an annual rate of 5.4% from 2019 to 2028, to reach USD 6.2 trillion by the year 2028.

In Asia Pacific, the market is majorly driven by China, Japan, India, Singapore, and Australia. China dominated the market in terms of revenue share in 2020. An increase in the number of advanced, well-equipped hospitals and a large number of surgical procedures are boosting market growth in Asia Pacific over the forecast period.

The market players are involved in product portfolio and regional expansions, as part of their strategic initiatives. For instance, in June 2021, Intuitive India, a part of Intuitive Surgical, launched its first robotic-assisted surgical stapler called SureForm in India. It is facilitated with SmartFire technology, an integrated software. This strategy helped the firm expand its geographical footprint. Some of the prominent players in the laparoscopic devices market include:

This report forecasts revenue growth at global, regional, and country levels and provides an analysis of the latest industry trends in each of the sub-segments from 2016 to 2028. For the purpose of this study, Grand View Research has segmented the global laparoscopic devices market report on the basis of product, application, end-use, and region:

How big is the laparoscopic devices market?

b. The global laparoscopic devices market size was valued at USD 6.5 billion in 2020 and is expected to reach USD 6.9 billion in 2021.

What is the laparoscopic devices market growth?

Which segment accounted for the largest laparoscopic devices market share?

b. North America dominated the laparoscopic devices market with a share of 34.6% in 2020. This is attributable to the increasing incidence of colorectal cancer, Crohn’s disease, technological advancements, and the presence of key players in the region.

Who are the key players in the laparoscopic devices market?

What are the factors driving the laparoscopic devices market?

b. Key factors that are driving the laparoscopic devices market growth include the increasing number of patients suffering from gallstones, obesity, rectal prolapse, and severe gastroesophageal reflux disease syndrome.