The global mining automation market size was valued at USD 3.6 billion in 2017 and is expected to witness a CAGR of 7.3% from 2018 to 2025. Rapid advancements in technologies such as Artificial Intelligence (AI) and robotics have resulted in increased use of automation solutions as a means to boost production efficiency.

The increasing trend of deploying innovative technologies, including robotics, sensors, and analytics, is driving demand for automated solutions. Emergence of the Internet of Things (IoT) has provided miners with next-generation analytics that facilitate real-time decision support. Operators are collaborating with technology providers to deploy wireless networks in underground mining. For instance, in March 2017, IBM Corporation announced a collaboration with Goldcorp Inc. to bring IBM Watson technology to the mines in Canada for exploration activities.

Additionally, advances in machine learning are expected to usher in a new era of automation, outpacing human performance in certain quarrying activities. Accenture LLP is offering Ethernet and Internet solutions in the field of mining automation to interlink various devices and equipment. Online analyzers, motor control, and weighing and gas emission devices are linked to Ethernet networks. This allows the user to obtain data and visualize, configure, and maintain these devices without any human interference.

Increasing need for mine and worker safety is driving market growth. Previously, traditional exploration and drilling techniques compromised the safety of mine workers, resulting in increased hazards at mining sites. Such instances have compelled mine owners to develop smart solutions and equipment to ensure the safety of workers. For example, Rio Tinto’s Mine of the Future program focuses on finding advanced methods for mineral extraction by reducing environmental impact and enhancing labor safety.

The equipment automation solution segment captured a revenue share of over 35.0% in 2017. Development of technologically advanced vehicles such as autonomous trucks, remote control equipment, and teleoperated mining equipment is expected to fuel the segment growth over the forecast period. These advancements in hardware automation are expected to continuously streamline the way large-scale mining is carried out across the globe.

Deployment of automated equipment is growing at a faster pace, especially in the Asia Pacific region. The Rio Tinto Group has deployed nearly 400 haul trucks enabled with Autonomous Haulage System (AHS) at Pilbara mines in Australia. The company is likely to expand its driverless truck program further by retrofitting Caterpillar, Inc. trucks and Komatsu Ltd. haul trucks for the Brockman 4 mining operation, allowing the mine to run entirely in driverless mode.

Apart from driverless trucks, teleoperated mining equipment such as wireless sensors, cameras, and Radio Frequency Identification (RFID) devices have been adopted in underground mining applications. Wireless technologies are used in instruments and device networks for efficient monitoring and asset management strategy. For instance, the Bagdigi coal mine in Jharkhand, India uses RFID tags to monitor workers in underground mines and hazardous environmental conditions.

The metal mining application segment is expected to dominate the mining automation market, accounting for a revenue share of over 35.0% in 2017. This growth can be attributed to increasing adoption of autonomous solutions in metal exploration activities. Moreover, rising demand for metals such as copper, zinc, lead, and nickel by end-use industries is expected to contribute to revenue growth.

This rising demand for base metals has led to a surge in adoption of an autonomous fleet, especially trucks and dragline excavators. In 2016, Barrick Gold Corporation partnered with Cisco Systems, Inc. to integrate Wi-Fi sensors in its mine near Nevada to track mining output. In 2017, Boliden Group partnered with Ericsson AB to build an autonomous gold mine. 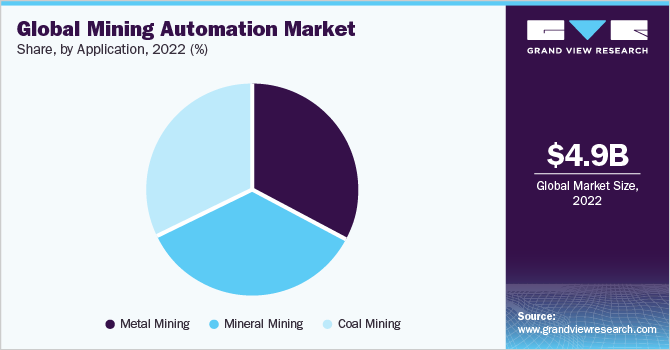 The coal application segment accounted for a significant share in 2017. Increasing need to improve quarrying conditions at coal sites has contributed to deployment of autonomous solutions at the site. The Commonwealth Scientific and Industrial Research Organization (CSIRO) collaborated with the Australian coal industry for development of an underground automation system that protects workers from mining hazards while improving productivity. Such ongoing developments are expected to have a positive impact on segment growth over the next few years.

Asia Pacific is expected to emerge as the leading regional market over the forecast period. Increased adoption of automation technology in Australia is expected to drive regional market growth. The Australian economy has witnessed the use of robots and remote-controlled equipment for safe and efficient extraction of minerals. Untapped potential for drilling and exploration activities in economies such as China and India are expected to provide substantial opportunities for mineral exploration over the forecast period.

Availability of essential mined commodities including zinc, lead, and nickel along with sustaining investments and favorable government policies are key factors driving industry growth in North America. It is expected to emerge as a promising region owing to the high potential for mineral exploration in U.S. and Canada. Several mines in Canada have undergone automation with usage of autonomous haul trucks to unearth and transport oil sands for crude oil processing.

Growing opportunities for mineral exploration, resources, and infrastructure are expected fuel market development in the Middle East and Africa (MEA) region. Increased demand for metal exploration is also contributing to the region’s growth. The Kibali gold mine in Democratic Republic of Congo (DRC) is the first underground automated mine in the region to have implemented automation in their fleet of mining vehicles.

Key players are either retrofitting autonomous technology in their existing line of equipment or are introducing new automated products to gain foothold in the market. Currently, Caterpillar Inc. and Komatsu Ltd. have a lineup of autonomous trucks, whereas the Rio Tinto Group has retrofitted 19 Cat 793F mining trucks. Furthermore, Caterpillar Inc. has installed Cat Command for Hauling software intended for operation of the autonomous fleet.

This report forecasts revenue growth at the global, regional, and country levels and provides an analysis of the latest industry trends in each of the sub-segments from 2016 to 2025. For the purpose of this study, Grand View Research has segmented the global mining automation market report on the basis of solution, application, and region: