Growing consumer awareness regarding various health benefits offered by tea polyphenols has been acting as one of the major factors driving their market. Over the last few years, consumers across the world have become heath conscious owing to increasing number of diseases. This shift in trend has been prompting such consumers to use various nutraceutical products. Tea polyphenols have emerged as the nutraceuticals of modern life and have been gaining a considerable amount of market share in the overall market. Tea polyphenols, generally found in green tea, oolong tea, and black tea, act as antioxidants and help in the prevention of neurodegenerative diseases such as Alzheimer’s, Parkinson’s. Green tea contains high levels of polyphenolic content such as catechins, flavanols, etc. which helps in the treatment of lifestyle diseases such as diabetes and cancer. The global market for tea polyphenols was estimated to be worth USD 209.3 million in 2012 and is expected to reach USD 367.7 million by 2020, growing at a CAGR of 7.4% from 2013 to 2020. Regarding volumes, market demand was estimated to be 4,850 tons in 2012 and is expected to grow at a CAGR of 8.3% from 2013 to 2020. A large amount of green tea polyphenols from Japan and China are exported to developed countries. Tea polyphenols enhance the performance of vitamins and hence are used in the treatment of cardiovascular diseases, cancer, etc. Most of the cancer preventive effects of tea polyphenols (mainly green tea polyphenols) are mediated by EGCG (epigallocatechin gallate), a primary polyphenolic constituent of green tea. A cup (240 ml) of green tea normally contains 200 mg of EGCG. The growth of tea polyphenols market has also been gaining market owing to the increasingly aging population of Japan and Europe and growing health consciousness in developing countries. Green tea polyphenols dominated the overall market owing to its high extractable polyphenol content over other tea polyphenols. Green tea is produced from fresh leaves steaming at high temperature, which keeps polyphenols intact in the tea. Green tea polyphenols are mostly used in the treatment of skin cancer, Sickle cell disease, and weight management. Green tea contains 30% to 40% of extractable polyphenols. On the other hand, oolong tea and black tea contain 5% to 20% of extractable polyphenols. 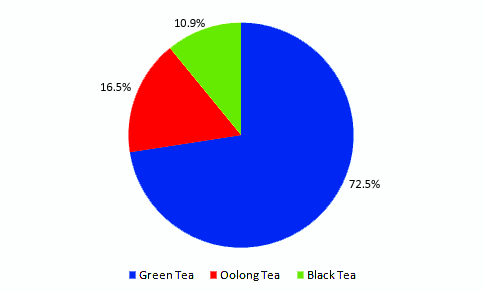 Asia-Pacific is the largest consumer of tea polyphenols, due to increasing aging population in Japan and abundant feedstock availability in the region. Asia Pacific accounted for 40% of the global market volume in 2012 and is expected to be the fastest growing market, at an estimated CAGR of 9.2% from 2013 to 2020. The region has extensive production facilities and supplies tea polyphenol products to the U.S. and European markets. The consumption of tea polyphenols has been increasing due to its super antioxidant property and easy availability of polyphenol products at reasonable rates. North America emerged as the second largest market for tea polyphenols and accounted for 27% of total market volume in 2012. North America was closely followed by Europe, which accounted for 26% of the global tea polyphenols consumed worldwide in 2012. Growth in the European market, however, has been somewhat constrained by stringent market regulations. Major manufacturers such as Naturex and Ajinomoto have shifted their focus towards catering to high growth markets such as China and India. In addition, they have been opening up manufacturing bases in these countries owing to the availability of abundant raw material and relaxed regulations.

The global polyphenols market is highly consolidated as the top three companies account for more than 80% of the total market. The market is mainly dominated by European and Asian companies. However, the presence of a large unorganized market mainly in China poses a constant threat to these big manufacturers in terms of their product quality and price offerings to end users. This unorganized sector in China is expected to oversupply the global market for tea polyphenols which is further expected to erode prices in the near future.