The global tobacco market size was valued at USD 849.9 billion in 2021 and is expected to expand at a compound annual growth rate (CAGR) of 2.4% from 2022 to 2030. The demand has been sustained by the growing number of smokers in the developing regions of Asia and Africa. The extensive marketing campaigns run by the major companies have also been a significant factor sustaining the industry. The industry is witnessing a trend of new product launches which intrigues consumers to consume tobacco and thereby drive market growth. 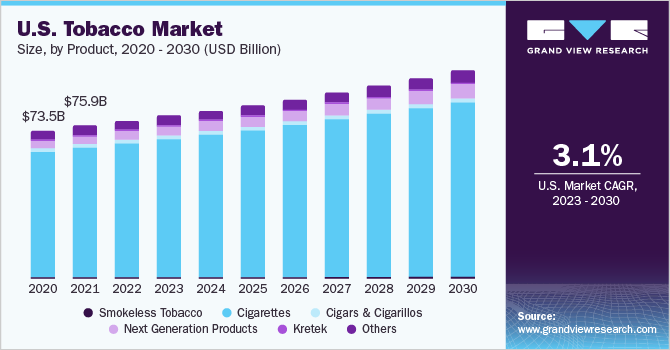 The COVID-19 pandemic has had a significant effect on the consumption of tobacco. Smoking is perceived to be extremely deadly, as COVID-19 is a respiratory disease, and smoking only aggravates the situation. However, trends across the globe revealed that lockdown-induced stress only led to increased consumption. The addition of new smokers remained relatively low during this period. However, the industry is expected to benefit from the consumers who resorted to excessive smoking during the pandemic, as it is expected to have cultivated a new habit among them.

The addition of a new range of tobacco products shows a moderate increase in both the number of individuals who smoke and the percentage of people who try the new products. The use of intriguing advertising strategies has produced considerable results and has proven to be a means of remaining competitive and sustaining market dominance. For instance, specific products are promoted and advertised more intensely to specific demographic or racial groups.

According to the Centre for Disease Control and Prevention (CDC) estimates, companies such as Marlboro, Newport, and Camel, whose marketing campaigns specifically targeted the youth, were the highest marketing spenders. This led to them being the most preferred brand by the youths. Most people have seen tobacco as a significant part of their life over the previous decade. This factor is expected to drive the overall product demand in the forthcoming years.

The companies are spending huge on marketing campaigns to offset the negative impacts faced by the tobacco industry due to increased health consciousness among consumers. According to the CDC data, in 2019, USD 8.9 billion was spent by large companies on marketing smokeless tobacco and cigarettes in the U.S. This amount breaks down to USD 22.5 million per day or almost USD 1 million per hour. The companies have spent extensively on discounts, thereby increasing their market penetration and sustaining growth.

Tobacco consumption has been on the decline in developed and wealthy countries across the globe, due to the higher level of awareness among the population regarding the ill effects of its consumption. To maintain demand in such countries, the companies are introducing new products that are significantly less harmful than conventional products. The market has witnessed the introduction of new nicotine products and this category has been dubbed as new, alternative, or novel tobacco. These items are now referred to as Next-generation Products (NGP) by the tobacco control community.

Major companies have diversified their strategies to develop NGPs. Phillip Morris International, for instance, has carried out several investments in heated tobacco products. The company is strongly focused on delivering smoke-free heated tobacco products, as it envisions this category to be a game-changer in the industry. The IQOS technology is an integral part of Philip Morris's efforts to disrupt itself and become a smoke-free company by 2025. The product already accounted for 23.8% of the company's revenue in 2020. IQOS is a line of heated products developed as part of its "heat-not-burn" promotion. According to IQOS's 2020 Annual Report, the company has 17.6 million users, with 12.7 million of them switching to IQOS and quitting smoking.

Cigarettes captured the majority share of the market in 2021, accounting for nearly 86% of the overall revenue. Cigarette consumption has remained stable due to the introduction of flavored, and menthol cigarettes. It can also be attributed to the availability of small cigarettes that facilitate smaller amounts of tobacco consumption for smokers who wish to cut down on their smoking habit. Cigarettes have an inelastic demand, which is a major factor that has driven market growth despite the heavy taxation that has been levied across the globe.

The rising popularity of partying and pub culture among millennials and working-class communities has especially fueled the demand for flavored and unflavored cigarettes around the world in recent years. Furthermore, emerging economies such as India and Thailand are seeing a significant increase in cigarette demand as a result of rising youth populations in these countries. According to the Global Adult Tobacco Survey carried out in 2017, India had the second largest number of smokers in the world with 267 million tobacco users.

The tobacco market is expected to benefit greatly from the launch of next-generation products, which is expected to become the fastest-growing segment. Major companies are investing heavily in the development of NGPs as they see this category as severely overpowering other products in the market. For instance, Japan Tobacco Inc. launched its Ploom X next-generation heated device in August 2021. Ploom X is the JT Group’s next-generation device for heated tobacco sticks. It is also equipped with Bluetooth functionalities that connect with the user's smartphone, enabling them to check the battery status, lock & unlock the device, and such other functions.

The offline channel led the market and accounted for the largest market share of more than 89% in 2021. It is projected to continue leading the market during the forecast period. The segment includes all retail outlets such as hypermarkets, supermarkets, convenience stores, and departmental stores. Consumers prefer these stores as they offer considerable discounts. Location proximity of these stores facilitates immediate demand fulfillment for tobacco consumption, which is also expected to drive the growth of the segment. 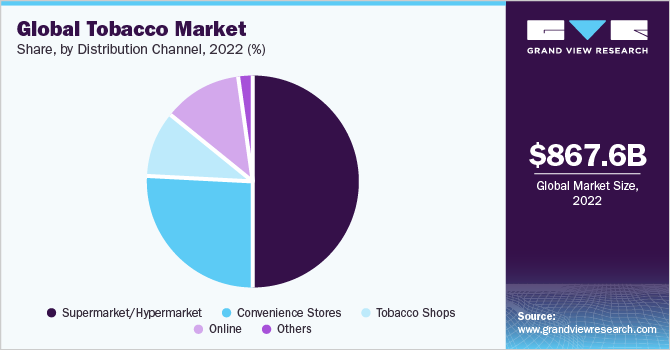 With the COVID-19 outbreak, consumers resorted to purchasing tobacco products online. Countries having strict lockdown laws prohibited citizens from leaving their homes, except for essential reasons. This facilitated the rise of online tobacco shopping. Furthermore, the online channels provided more marketing opportunities to the companies, which added to the tally of new smokers, especially millennials with easy access to the internet.

Asia Pacific held the largest market share in 2021, accounting for nearly 61% of the overall revenue. Offline infrastructure improvements and extensive brand marketing campaigns by prominent companies, in key markets such as India, Bangladesh, China, and the Philippines, are likely to support market expansion in this region. Additionally, companies are focusing on customers by introducing flavored cigarettes, which are widely popular among the younger population.

The number of tobacco users is witnessing a rise in developing countries in Asia. For instance, according to the findings of the National Family Health Survey conducted in 2019-20 by the Government of India, the absolute number of consumers in India is very high predominantly due to its huge population. Furthermore, the findings showed that despite all cessation policies, consumption remained high in rural areas as compared to the urban areas, which is driving the industry in the region.

The Middle East and Africa segment is expected to be another lucrative region for manufacturers and is estimated to showcase a CAGR of 2.9% during the forecast period. According to data published by the American Cancer Society and Vital Strategies in its sixth edition of The Tobacco Atlas, tobacco consumption in the Middle East is estimated to be 400 billion cigarettes per year. The survey reveals considerable rises in product usage in Bahrain, Lebanon, Egypt, Oman, and Saudi Arabia.

The market comprises companies with a stronghold on tobacco products and is launching and developing next-generation products. The strategies deployed by companies include:

Some prominent players in the global tobacco market include

This report forecasts revenue growth at global, regional, and country levels and provides an analysis of the latest industry trends and opportunities in each of the sub-segments from 2017 to 2030. For this study, Grand View Research has segmented the global tobacco market report based on product, distribution channel, and region:

How big is the tobacco market?

What is the tobacco market growth?

Which segment accounted for the largest tobacco market share?

b. The Asia Pacific dominated the tobacco market with a share of 61.1% in 2021. This is attributed to the high consumption of tobacco products in countries including China, the Philippines, Vietnam, Malaysia, India, Thailand, Bangladesh, and Indonesia.

Who are the key players in the tobacco market?

What are the factors driving the tobacco market?

b. Key factors that are driving the tobacco market growth include an increasing number of smokers in the developing regions of Asia and Africa. Further, new product launches are also expected to drive the market.