The U.S. automotive coolant market size was USD 611.8 million in 2015. Expanding automotive aftermarket and growing consumer awareness regarding automobile maintenance and engine efficiency is a decisive factor for industry growth. 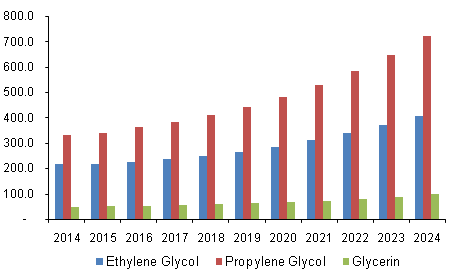 The product is increasingly being utilized to substitute water and other cooling agents, owing to their superior heat absorption and corrosion inhibiting properties. The recent trend of substituting toxic, ethylene glycol with safer, organic based coolants is anticipated to provide lucrative growth opportunities over the forecast period.

Stringent regulatory framework regarding antifreeze disposal & recycling has compelled manufacturers to adopt environment-friendly, sustainable materials & products in the automotive industry. The introduction of new ASTM standards, along with other regulations by the Department of Environmental Quality (DEQ), is serving to boost fuel efficiency in modern vehicles as a measure of combating high emission levels. These factors are highly conducive to market growth.

Major automakers such as the Ford Motor Company, General Motors, Cummins, and Detroit Diesel have certified antifreeze recycling equipment and developed standards for recycled antifreeze. This factor is further expected to drive industry growth on account of growing consumer awareness regarding the benefits of recycled resources and sustainability.

Coolants may face physical limitations in extremely frigid temperatures with the resultant ice formation on car engines, while warmer climes may cause evaporation of the water content in the mix. These factors are likely to negatively impact industry growth over the forecast period.

Opportunities for industry players are expected to emerge with the increasing vehicle parc in the U.S. and growing popularity of technologically advanced or automated cars. Consumers are increasingly servicing their vehicles and undertaking careful maintenance to prolong the lifespan of vehicles, which is likely to provide major opportunities to suppliers.

"Propylene glycol was the leading product segment for automotive coolant"

Propylene glycol (PG) emerged as the dominant product in recent years, replacing ethylene glycol (EG) as the favored antifreeze in the U.S. PG has numerous advantages such as non-toxicity, high compatibility & low cost as compared to the conventional EG product, leading to a rise in sales in recent years.

Advancements in processing technologies and stringent regulations promoting the substitution of toxic compounds are expected to surface as a vital determinant for determining PG demand over the forecast period. PG was the leading product in 2015, growing at the highest CAGR of over 8% from 2016 to 2024.

Ethylene glycol (EG) was traditionally utilized as the primary coolant in the automotive industry owing to its superior characteristics such as high heat transfer properties along with low product costs.

EG has an added advantage in frigid countries with high annual levels of snowfall since they can lower the freezing point of water when mixed with it. However, federal regulations regarding hazardous chemicals such as EG have lowered consumption levels in recent years.

Organic acid technology (OAT) accounted for over 49% of the global volume share in 2015. High demand for coolants based on minimally depleting carboxylate technology as substitutes for conventional antifreeze based on silicates, nitrates, phosphates, and amines is expected to translate into rapid industry growth over the forecast period.

Conventionally, antifreeze agents were based on inorganic acid technology (IAT) that offer high protection to automobile engines against liner pitting, boilovers, and cavitation. However, these products have lost favor to OAT coolants in recent years on account of their high maintenance efforts & costs.

The two major distribution channels for coolants in the U.S. include Original Equipment Manufacturers (OEMs) and the automotive aftermarket. Rising age of vehicles along with increasing disposable income are the key factors driving distribution via the aftermarket.

Manufacturers rarely assume responsibility for coolant refilling post a vehicle’s purchase, which has led to higher demand from the aftermarket, where vehicles are often injected with coolants during servicing. The segment currently accounts for around 72% of the volume in 2015 and is expected to grow at above 8% CAGR from 2016 to 2024.

Furthermore, stringent corporate average fuel economy (CAFE) regulations in the U.S. are more expensive for OEMs to comply with which leads to greater volume requirements to amortize increasing costs. These factors are likely to restrict growth in the OEM segment, thereby providing lucrative opportunities to aftermarket providers.

Major end-use segments in this report include passenger cars, commercial vehicles, and two-wheelers. The economic recovery in the U.S. post the recession of 2009 has spurred trade & economic activities in the region, leading to greater demand for commercial transportation.

The expansion of the online retail sector (E-commerce) and the subsequent demand for reliable freight & goods transportation is another major factor driving segment growth. Commercial vehicles are anticipated to grow at over 8.6% CAGR over the forecast period and occupy around 54% share by 2024.

Passenger car sales have also increased in recent years; however, the market is relatively mature and presents limited scope for growth. Two-wheelers also present a smaller segment for automotive coolants, since oil drain intervals in such vehicles are lower than that of four-wheelers.

The industry is relatively mature, with several major well-established companies. Newer entrants would be compelled to adopt innovation and differentiation strategies to gain a foothold in the market. Product launches, R&D initiatives, and intensive marketing strategies are being taken by several players in order to differentiate themselves from the competition.

How big is the U.S. automotive coolant market?

What is the U.S. automotive coolant market growth?

b. Automotive aftermarket dominated the U.S. automotive coolant market with a share of 74.8% in 2019. This is attributable to rising age of vehicles along with increasing disposable income .

Who are the key players in U.S. automotive coolant market?

What are the factors driving the U.S. automotive coolant market?

b. Key factors that are driving the market growth include expanding automotive aftermarket and growing consumer awareness regarding automobile maintenance and engine efficiency.