The global vegan yogurt market size was valued at USD 1.6 billion in 2019 and is projected to grow at a compound annual growth rate (CAGR) of 18.9% from 2020 to 2027. Shifting traction towards dairy-free products among millennials on a global level is expected to promote the scope of plant-based nutritional products such as vegan yogurts. Consumers have also been increasing their spending plant-based products as a result of increased prevalence of disorders including milk allergies among the common mass in developed economies of North America and Europe. Over the past few years, some of the regulatory authorities have been promoting the production and use of vegan products. The U.S. FDA. announced its plans to promote innovation in the manufacturing of a wide range of dairy alternatives including vegan yogurt and other plant-based products. The European Commission also aimed to introduce proper guidelines for the manufacturers to enhance production output in processing milk alternatives. 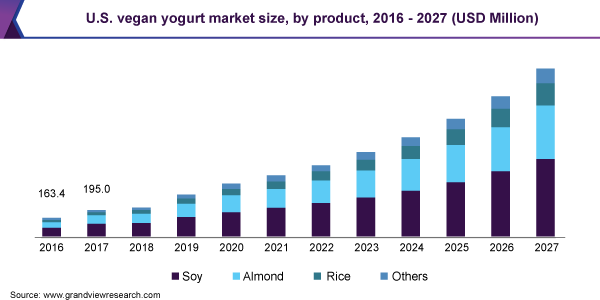 Dairy consumption has been on the decline for decades, with each generation drinking less milk than its predecessor. Plant-based diet has been gaining popularity among the common masses, rapidly looking to replace the use of dairy products, including vegan yogurt. Vegan yogurts containing live probiotics and cultures offer the same digestive benefits as dairy-based yogurts; sometimes vegan yogurts offer nutrients that even dairy-based yogurts fail to provide.

For instance, flax milk yogurt and hemp yogurt contain natural omega-3 fatty acids and fiber. Many other varieties of vegan yogurt are fortified with vitamins and minerals to make them healthier. Vegan yogurt is just as rich, smooth, and creamy as conventional yogurt and does not require adaptation of taste and texture.

Makers of vegan yogurt have been focused on experimenting and innovating with new bases and unique flavors to position their product as mainstream. Vegan yogurt is made from milk derived from nuts, seeds, and grains. Nuts used to make the product include coconut, macadamia, hazelnuts, pistachios, pili, almond, and cashew. Seeds used in the making of vegan yogurt include soy, flax, and hemp, whereas grains include oats.

The soy segment accounted for the largest revenue share of exceeding 45.0% in 2019. Plant-based food products are gaining popularity among consumers including dairy-alternative products such as soy yogurt. Moreover, these seed-based yogurts are an excellent source of protein when compared to dairy-based yogurt. Soy-based yogurt helps to reduce cholesterol and blood sugar levels in the body. These benefits are promoting the demand for soy-based vegan products, thereby driving the market.

Rice yogurt is anticipated to have immense potential over the forecast period. The product has been gaining popularity among customers as rice milk is considered to be the least allergenic milk amongst all the dairy milk alternatives. Moreover, rice milk is fortified with Vitamin A, Vitamin D, and calcium, which fulfill the requirement of nutrients. In addition, rice-based yogurt is naturally sweet as compared to other nut-based yogurts in which sugar is added for bacteria culture.

The revenue share of hypermarkets, supermarkets, as well as convenience stores accounted for over 50.0% in 2019. Companies including Walmart, Target, 7Eleven, SPAR, Aldi, Carrefour, and Lidl have large grocery stores chains across the globe with a large customer base. For instance, according to the Target Inc. company website, the company is expected to open around 26 new stores across the U.S. Moreover, rising consumer preference for non-dairy yogurt is driving the market. These consumer trends are anticipated to maintain the dominance of this distribution channel over the forecast period. 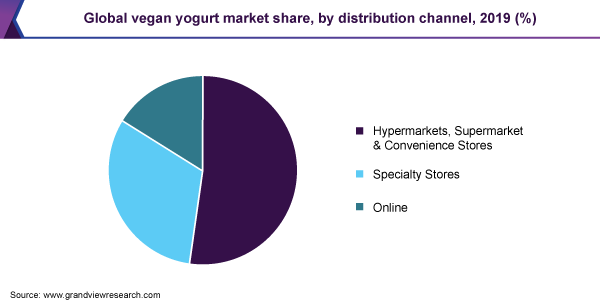 Online channel is expected to witness the fastest growth on account of rising penetration of smartphones among millennials on a global level. These channels have the ability to provide extra-convenience, and ease of shopping. A variety of features offered by e-retailers, including several value-added services such as discounted prices, cash-on-delivery, and cashbacks, are expected to promote the growth of the online channel in the coming years.

Europe held more than 50.0% of the market revenue share in 2019. In the developed economies including Germany, U.K., and France, the positive outlook toward plant-based foods among consumers of the region as a result of an increased number of campaigns on social media and satellite television channels is projected to keep the dominance of the region.

The market revenue from Asia Pacific is anticipated to witness a CAGR of 20.2% from 2020 to 2027. Strong visibility of soy yogurt in countries such as Japan owing to increased awareness about gluten-free products on a domestic level is projected to remain an influential force in the upcoming years. In addition, the rising number of lactose intolerant people and growing consumer preference for a vegan diet has been driving the growth of the market in the region.

Key companies have been launching innovative products to expand their portfolios and consumer base. Lately, companies have been increasing their consumer reach by investing in the online distribution channel. In December 2019, General Mills Inc. launched a dairy-free product line of french-style yogurt under its Oui brand. Our yogurts are made with coconut milk and are available in vanilla, strawberry, raspberry, and mango flavors. Some of the prominent companies in the vegan yogurt market include:

This report forecasts revenue growth at global, regional, and country levels and provides an analysis of the latest industry trends in each of the sub-segments from 2016 to 2027. For the purpose of this study, Grand View Research has segmented the global vegan yogurt market report on the basis of product, distribution channel, and region:

How big is the vegan yogurt market?

What is the vegan yogurt market growth?

Which segment accounted for the largest vegan yogurt market share?

b. Europe dominated the vegan yogurt market with a share of 51.3% in 2019. This is attributable to demand vegan food in Western European countries such as France, Germany and U.K.

Who are the key players in vegan yogurt market?

What are the factors driving the vegan yogurt market?

b. Key factors that are driving the market growth include rising importance of plant-based food and growing concerns regarding lactose intolerance.