The global yogurt drink market size was valued at USD 29.19 billion in 2016. Rise in consumer awareness with respect to health benefits of yogurt drink is projected to drive industry growth over the forecast period.

Companies in North America and Asia Pacific are promoting yogurt as an essential drink for good health, which is further expected to fuel market growth. Moreover, companies are collaborating with dairy farms to ensure efficient supply of raw materials for production of yogurt drinks. This is expected to have a positive impact on the industry over the forecast period.

Hypermarkets and supermarkets are major distribution channels of yogurt. However, several companies including Nestlé; Dana Dairy Group; Arla; and Ultima Foods Inc. sell their products via retailers such as Carrefour and Walmart.

Yogurt drink, available in different flavors, is considered a beverage in many countries. Therefore, a large number of manufacturers are involved in innovation to develop new flavors to meet rising demand. This is expected to propel the yogurt drink market over the forecast period.

Rise in consumption of non-dairy beverages is expected to hinder industry growth. Rise in vegan population in regions such as North America and Asia Pacific, in addition to rise in global demand for lactose-free products, is also projected to limit market growth.

Regular yogurt accounted for a revenue share of 34.63% in 2016. As acceptance for different flavored yogurts with high-protein content grows amongst consumers, diversified products will see an expansion over the forecast period. Additionally, benefits offered by this product over plant-based drinks are expected to augment industry growth.

Increase in awareness regarding disadvantages of high sugar intake, which leads to conditions such as obesity and heart diseases, is likely to be a key driver for the fat-free beverages market. This, in turn, is expected to trigger the growth of the yogurt drink market. Opportunity to create a new range of products that are fat-free and have low-sugar content has grown owing to soaring diabetic population. This is is likely to have a positive impact on the industry.

The hypermarket and supermarket segment dominated the market in 2016, accounting for a revenue share of 49.13%. This distribution channel has witnessed an increase in demand due to the growth of organized retailing in developing countries across the globe. Moreover, expansion of modern retail chains in Asia Pacific countries such as Thailand, Malaysia, Philippines, and Indonesia has increased since 2014. This has also led to the expansion of the segment.

Demand for yogurt drinks in convenience stores is expected to see a boost in the coming years, supported by the growth of working class population. These consumers prefer to purchase yogurt drinks at convenience stores. Furthermore, the convenience store segment is likely to witness rapid growth over the forecast period due to advancements in dairy farms, increase in product varieties, and development in packaging and distribution technologies.

Demand for plastic bottle packaging accounted for a market share of 64.22% in 2016 in terms of revenue. With change in lifestyle, a large number of people across the globe are opting for on-the-go products, which in turn, is projected to fuel market growth over the forecast period. 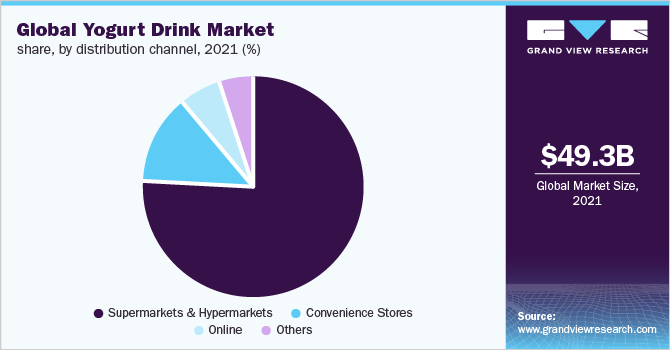 Tetra packs accounted for 35.78% of the market in 2016 and is expected to grow at a rate faster than the plastic bottle segment over the forecast period. This growth can be attributed to tetra packs being more environment friendly as compared to plastic bottles.

Packaging plays a major role in influencing purchasing decisions of consumers; therefore, manufacturers are largely focusing on packaging of yogurt drinks. With rise in demand for on-the-go breakfast, plastic packaging could give stiff competition to tetra packs as the latter is more inconvenient to carry.

The Asia Pacific market is anticipated to expand at a revenue-based CAGR of 6.0% from 2017 to 2025 owing to a rise in the price of milk production and consumer inclination shifting from sugary drinks to healthy beverages. In addition, willingness of consumers to spend on healthy snacks has facilitated manufacturers to innovate and market a variety of beverages in the industry.

Europe, which was ranked at the second position after Asia Pacific, is expected to register a CAGR of 4.4% from 2017 to 2025 in terms of revenue. The regional market held a share of 28.0% in 2016. Rise in consumption of dairy and dairy products in the region, especially in developed countries such as the U.K. and Germany, is expected to drive demand.

There is a rise in consumption of yogurt drink for treatment of cholesterol and intestinal health, which is expected to drive the market across developed economies. North America is the third major market, accounting for a share of 24.0% in 2016. Demand is likely to grow in this region as yogurt is considered an ideal snack for kids, especially in the U.S.

This report forecasts revenue growth at global, regional, and country levels, and provides an analysis of industry trends in each of the sub-segments from 2014 to 2025. For the purpose of this study, Grand View Research has segmented the yogurt drink market based on type, distribution channel, packaging, and region: