Air core drilling is a method wherein hardened steels or blades are used to bore a hole in an unconsolidated formation. Air core drilling can reach a depth of 300 meters which is great for mineral mining. The air core drill bit has three blades which cut the soft rock formations, thereby removing the drill cuttings by injecting air into the hole through the annular area between the drill rod and inner tube. Basically, the technique is a part of shallow drilling requiring minimal site preparation.

Unlike other exploratory drilling methods, air core drilling stretches to long hours as the process is more accurate, but slower. The samples collected here do not get damaged. The increasing investment in exploration and production activities across various unconventional resources is driving the air core drilling market. This is in order to meet the growing demand of ever-rising energy demands. The main advantages of the process are the holes need not to be cased, the samples collected are more accurate and present the same as it is below the surface. 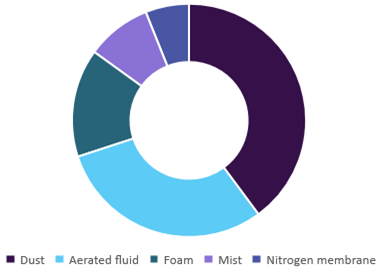 Air core drilling comes in a number of forms. Dust drilling is the least expensive type of air drilling and requires no fluid system for clean-up. Dust drilling provides an ideal environment for use. Dust drilling cannot handle wellbore fluid influxes; these cuttings result in mud rings in the annulus which can lead to a risk of downhole fire if mud rings are not eliminated.

Aerated drilling involves nitrogen or air being added to the liquid phase of the drilling fluid, thus lowering the effective mud weight. This method can be used with most types of drilling fluids. Nitrogen Membrane drilling minimizes the chance of downhole fire. Its US patent is held by Weatherford, owner of the biggest fleet of on-site generated membrane Nitrogen Production Units globally.

The air core drilling market is expected to show good growth in the coming years, owing to a number of assisting factors:

However, there are also some problems associated with this technique which can hinder market growth, such as being restricted to mature geographical areas where water and hydrogen sulfide zones are absent, as well as health concerns arising out of long exposures to noise, metal dust, as well as other toxic materials.

Some of the recent developments that the air core drilling industry has seen include: