Automotive V2X Market: The comprehensive presence of electric vehicles is predicted to act as a key factor for the growth of V2H and V2G market

The automotive V2X market is in its nascent stageand offers immense scope for growth. The rising need for lesser traffic congestion, lower fuel wastage, and safer roads, has led to the need for an intelligent transportation system, where vehicles can continuously interact with each other and road-side infrastructure, facilitating the flow of reliable information about the present traffic conditions across the entire network. The vehicles equipped with these communication systems would reduce ambiguity aspect, while driving, ensuring enhanced safety. 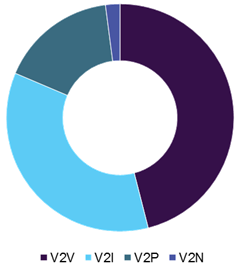 At present, by communication type, a V2V system is estimated to cover the highest market share, followed by the V2I system. While V2G and V2H systems do not possess any market share, they are expected to have the highest growth rate from 2019 to 2025.Such an aggressive growth would be a result of an increasing need for smart cities and the emergence of large-scale EV societies.

Region-wise, in the U.S., the Department of Transportation (USDOT) is expected to mandate the implementation of a V2X system in light vehicles by the end of the year 2019. This is anticipated boost the adoption of V2X in passenger cars and light commercial vehicles, owing to the increase in market size. Similarly, Europe’s leading trade associations namely the European Automobile Manufacturers' Association (ACEA), European Association of Automotive Suppliers (CLEPA), European Telecommunications Network Operators' Association(ETNO), and European Competitive Telecommunications Association (ECTA), among others are intending to launch a large-scale project to test the feasibility of V2X technologies at the EU level in2017. In the Asia-Pacific region, countries such as China, Japan, and South Korea, are running pilot projects to understand the growth prospects of V2X technologies. In October 2016, it was declared that General Motors, Tsinghua University, and Chang’an Auto, in accordance with SAE-China and the China ITS Industry Alliance, are working toward the standardization of V2X message format across different communications platforms.

After years of research, the United States was able to finalize the standards for Dedicated Short Range Communication (DSRC)that is currently being used in the availableV2X communication systems. DSRC faces several challenges due to its reliance on Road-Side Unites (RSUs), which are, currently, not deployed. This form of connectivity is expected to be dominant, in the automotive V2X market, with the increasing numbers of RSU’s.

With the advancement in technology, DSRC would not be the sole solutionavailable for V2X communication. The fifth generation (5G) technologies and LTE are expected to have potentials to serve the DSRC used cases and other futuristic needs such as low-latency, extended coverage, and high bandwidth. This enables mobile operators to make way for opportunities, providing additional values to the V2X communication systems. Cellular V2x systems are expected to compete and complement the existing DSRC technology, facilitating the enrichment of V2X capabilities.