The market is expected to be driven by the increasing demand for wafers and ICs in several end-use industries including consumer electronics, home appliances, automotive electronics, and communication systems. The manufacturers of silicon wafers in Asia Pacific account for over 50% of the overall production, which are then, distributed with the use of wafers carriers through extensive distribution network spread across the globe.

Inexpensive labor and low cost of fabrication are expected to be the key aspects for the production of silicon wafers in the region. As the demand for ICs is growing in automotive electronics, consumer electronics, and home appliances, the demand for shipping & handling products is expected to increase over the forecast period.

The IC market is growing rapidly post-subprime lending crisis in the U.S. as most of the major IC manufacturing companies are located in the country with production facilities in Asia Pacific countries such as Taiwan, South Korea, and China. In addition, increasing complexity of automotive and consumer electronics is expected to be another key aspect for the market growth of ICs. As a result, the demand for wafer carriers and IC shipping & handling products is likely to rise over the projected period. 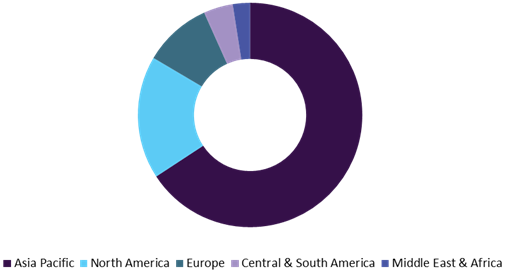 The high cost of the chips coupled with high vulnerability to changes in the atmospheric conditions and several other factors has created a need for reliable carrier products. As a result, the utilization of materials such as High-density Plastics (HDPE), Polytetrafluoroethylene (PTFE), and other materials with high corrosion, thermal, and chemical resistance has improved the reliability of IC chip manufacturers on carrier products.

The penetration of carrier tapes is high as there has been a significant advancement in the manufacturing technology as well as the utilization of antistatic flexible material as the carrying medium. However, IC trays dominated the market in 2015 & 2016, which is expected to continue as it aids in handling & shipping and allows systematic shipping of ICs. In addition, high durability of trays coupled with an easement in the bulk shipping is expected to drive the demand over the forecast period. IC shipping tubes market is expected to decline gradually owing to its increasing substitution with IC trays and carrier tapes.

The IC trays are further segmented into waffle-packs, metal trays, JEDEC trays and gel packs. In processing & storage application, JEDEC trays account for the majority share of the market owing to the high strength and efficient design of the trays suitable for processing & storage applications. However, in shipping & handling application waffle-packs accounted for over 80% of the market. This can be attributed to the high protection offered by the product coupled with a large number of IC chips that can be accommodated on a tray.

The market is segmented on the basis of the region into North America (U.S.), Europe (France and Germany), Asia Pacific (China, Japan, Taiwan, and South Korea), Central & South America (Brazil), and Middle East & Africa. Taiwan is the major producer of silicon wafers globally followed by South Korea, Japan, and China. As a result, Asia Pacific accounted for over 50% wafers production in 2015.

The major players in the market constantly invest in the research & development projects to enhance the performance of the current products and develop new products to gain a competitive edge over the other players in the market. Widespread distributions channels of Entegris benefits the company in catering to the global market and provide optimum quality services to its customers.