The global trimethyl pentanediol monoisobutyrate market size was valued at USD 511.0 million in 2019 and is expected to grow at a compound annual growth rate (CAGR) of 7.7% from 2020 to 2025. Increasing demand for latex paints globally is the key factor driving market growth worldwide. Major construction companies across the globe are shifting toward water-based latex solutions over oil-based due to their durability, aesthetic appeal, and ease of application. Asia Pacific dominates the production and consumption of 2,2,4-trimethyl-1,3-pentanediol monoisobutyrate owing to the strong presence of manufacturers across the region, especially in China. Growth in the construction sector and cheap production costs are expected to drive growth in the region. 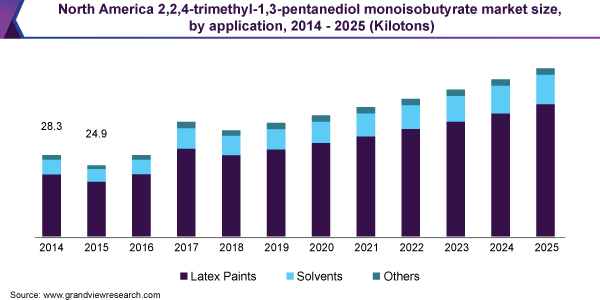 2,2,4-trimethyl-1,3-pentanediol monoisobutyrate, also known as texanol, is an alcohol ester majorly used as a coalescing agent in latex paints. It is commercially manufactured by the self-condensation process of dry, acid-free isobutyraldehyde in the presence of sodium isobutoxide as a catalyst in an enclosed vessel. The mixture is then washed with water to remove other chemicals formed during the reaction and the remaining liquid is almost a 99% pure form of texanol.

The latex paint application segment dominated the global consumption of the product mainly due to its non-yellowing and non-chipping properties. They are also termed as acrylics with water-soluble bases, which can be easily cleaned from any surface. These properties have collectively resulted in high demand of 2,2,4-trimethyl-1,3-pentanediol monoisobutyrate across various industries such as construction, DIY (Do-It-Yourself), and automotive aftermarket.

The rising demand from latex paints from these industries is anticipated to encourage the manufacturers across the globe to develop sustainable products. Texanol has been regarded as a non-VOC emitting solvent in U.S., China, and European Union. The preference for green certification ingredients is thus anticipated to propel the consumption of low VOC solvents such as texanol.

The major applications of trimethyl pentanediol monoisobutyrate include its utilization as a coalescing agent in the production of latex paint, as a solvent in the manufacturing of cosmetics, polishes, pesticide additives, and chemical intermediate. In 2019, latex paint production accounted for 73.5% of market share, in terms of volume. Increasing demand for water-based low VOC products in the construction industry along with the launch of several high-quality resins is expected to drive the demand for 2,2,4-trimethyl-1,3-pentanediol monoisobutyrate over the forecast period.

Globally, water-based formulations are replacing solvent-based painting product counterparts, due to their environment compliant properties, especially in the construction industry. These are used in the exterior as well as interiors of residential and commercial buildings. The rapidly growing construction industry followed by rising redevelopment trend is anticipated to boost the demand for 2,2,4-trimethyl-1,3-pentanediol monoisobutyrate over the forecast period.

Paint manufacturers are also developing new products with latex paints such as aerosol or spray cans that are further anticipated to witness high demand from the automotive, advertising, and DIY industries. Due to their safe usage, these products are also readily available directly to the customers through e-commerce platforms and local stores. Such advancements in the industry are expected to propel the growth of 2,2,4-trimethyl-1,3-pentanediol monoisobutyrate market across the globe.

However, other applications include oil-drilling muds, wood preservative carriers, ore flotation/ frothing, and floor polishes. It is also permitted by the Federal Insecticide, Fungicide, and Rodenticide Act (FIFRA) for the usage in pesticide formulations for non-food crops. The chemical is anticipated to gain wide acceptance as a pesticide additive, owing to its biodegradable properties. The chemical is thus anticipated to gain significant demand from turf and gardening use pesticide manufacturers.

Asia Pacific is expected to witness a CAGR of 8.8%, in terms of revenue, from 2020 to 2025.  The consumption of the product is anticipated to show a significant rise in Asia Pacific owing to favorable government regulations and rising demand from the coatings industry. The paints industry in the region is flourishing due to increasing infrastructure spending. 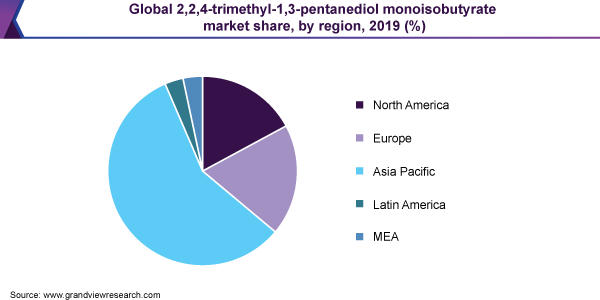 Asia Pacific is characterized by the availability of skilled labor and easy access to capital. Furthermore, China and India are most likely to attract chemical manufacturers due to low land cost and lenient regulations by various regulatory authorities. Furthermore, the region is home to rapidly expanding industries such as construction, and cosmetics. Owing to such factors, China has become the leading producer of texanol globally.

The demand for solvents in North America is mainly dominated by their consumption in three major industries, which are paints and coatings, pharmaceuticals, and cosmetics and personal care. Texanol being one of the most preferred solvents in nail polishes and also a coalescing agent in latex paints is anticipated to have a high demand in the regional market, especially due to its non-toxic recognition by U.S. EPA. The manufacturing sector in North America is characterized by the presence of health and environmental protection agencies that have established regulations on chemical manufacturing in order to maintain safe manufacturing practices. This is one of the primary reasons driving the demand for 2,2,4-trimethyl-1,3-pentanediol monoisobutyrate in North America with a volume-based CAGR of 6.8% over the forecast period.

Europe emerged as the second largest market for 2,2,4-trimethyl-1,3-pentanediol monoisobutyrate. The manufacturing sector in the region witnessed a significant recovery in the production of oil and gas with major companies expanding their capacities. This largely benefited the petrochemical sector of the region. The primary raw material, isobutyraldehyde used in the production of texanol, is largely dependent on petrochemical industry. The development of the petrochemical sector is thus anticipated to benefit the production of texanol in Europe. Conversely, Middle East and Africa and Latin America have a comparatively lesser market penetration mainly due to lack of awareness regarding the product and its usage.

The multinationals industry have been working on enhancing its product portfolio holdings to cater to broader application markets. However, regional demand for latex paints in Asian countries has facilitated the entry of several small and medium enterprises to tap the market potential. Furthermore, in the growing economies, the market is well established with the presence of multiple distributors, in order to keep operations steady and smooth. Distributors such as Parchem and Stobec have their presence across the globe, whereas companies such as Paras Enterprises distributes in India. Similarly, Wego Chemical Group is one of the recognized distributors in the U.S. However, the overall industry is anticipated to reflect positive growth trend over the foreseeable future due to subtle technological advancements and multiple mergers undertaken by the key players in the market space. Some of the prominent players in the trimethyl pentanediol monoisobutyrate market include:

This report forecasts revenue and volume growth at global, regional, and country levels and provides an analysis of the latest industry trends in each of the sub-segments from 2014 to 2025. For the purpose of this study, Grand View Research has segmented the global trimethyl pentanediol monoisobutyrate market report on the basis of application and regions:

b. Asia Pacific dominated the 2,2,4-trimethyl-1,3- Pentanediol Monoisobutyrate Market with a share of 57.4% in 2019. This is attributable to favorable government regulations and the rising demand from coatings industry.

Who are the key players in 2,2,4-trimethyl-1,3- Pentanediol Monoisobutyrate Market ?

b. Some key players operating in the 2,2,4-trimethyl-1,3- Pentanediol Monoisobutyrate Market include OXEA, Eastman Corporation, Univar Solutions, and Hallstar.

What are the factors driving the 2,2,4-trimethyl-1,3- Pentanediol Monoisobutyrate Market ?

b. Key factors that are driving the market growth include increasing demand for latex paints globally and shift of major construction companies towards water based latex solutions over oil based, due to their durability, aesthetic appeal, and ease of application.