The global acrylic acid market size was 5,750.0 kilo tons in 2014. Growing demand for superabsorbent polymers in the personal care industry is expected to drive growth over the forecast period. Increasing consumption in surfactants, surface coatings, and adhesives & sealants production is also projected to shape up the industry.

The majority of the acid disposed of is either evaporated into air or is underground strata of soils. When evaporated, they break down into other chemicals, hence posing less threat in terms of air pollution. However, when disposed into underground strata, it doesn’t bind with soil and enters the groundwater. Groundwater contamination associated with its disposal has been an important issue and has attracted scrutiny from environmental agencies around the world.

Increased regulatory pressure on companies has led to the development of bio-acrylic acid. Major producers such as BASF, Dow Chemicals, Cargill, and Novozyme have invested in developing a bio-based product at prices competitive with its conventional counterpart. Europe's acrylic acid market price saw an uptrend in May 2015, predominantly due to outages. However, overall demand is expected to be stable and hover close to 2014 levels.

OPX Biotechnologies, a bio-based chemicals producer, has successfully developed a low-cost route for bio-acrylic acid through dextrose and sucrose as raw materials. The company claims to achieve prices of USD 1.10 per kg and USD 0.85 per kg using the respective raw materials, compared to its conventional counterpart which was sold at USD 1.20 per kg in 2012. OPX Bio plans to commercialize its bio-based route with an initial capacity of 220-kilo tons per year by 2017.

Performance characteristics such as varying degrees of durability, hardness, tackiness, and glass transition temperatures are projected to promote its derivative consumption in various end-use applications. Acrylates are witnessing high demand in detergents, dispersants, flocculants, and thickeners.

Acrylate esters are a major derivative of acrylic acid. Several companies have been focusing on utilizing acrylate esters for multiple end-use applications across industries such as automotive and more. The major application is concentrated in paints, acrylic gums, viscosity adhesives, and acrylic textiles among others.

Acrylates impart several desirable properties to polymers such as clarity, color stability, aging, and heat resistance along with excellent weather-ability, leading to higher product demand in coating & adhesives industries. Apart from these, one of the crucial characteristics of acrylate ester is glass transition temperature, which enables the formulated polymer to be softer & more flexible rather than hard & brittle.

Based on end-use industries, the global industry is segmented into surfactants & surface coatings, organic chemicals, textiles, water treatment, adhesives and sealants, and personal care products along with rubbers, inks, resins, and cosmetics.

Surfactants & surface coatings are segment is projected to register the highest growth at an estimated CAGR of 6.3% from 2015 to 2022. The segment growth is expected to be driven by increasing coatings demand in the automotive, aerospace, and paper industries. Other end-use industries such as textiles where acrylic acid-based products serve as fillers in padded jackets are also expected to gain market share rapidly.

The Asia Pacific, acrylic acid market, led the global industry with a demand share estimated at over 48% in 2014. China and India collectively accounted for about 70% of the regional demand for the same year. Increasing derivatives consumption in surfactants, coatings, personal care products, and adhesives is expected to drive regional growth over the forecast period. 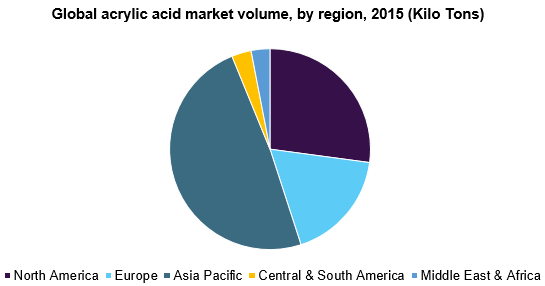 The global acrylic acid market share is moderately concentrated with the top four companies Arkema, BASF, Dow Chemical Company, and Nippon accounting for just over 45% in 2014. BASF was the market leader with over 12% of the overall share.

The industry has witnessed joint ventures between major companies such as Novozymes and Cargill to develop bio-based counterparts. The joint venture was established in 2008 and is currently working on commercializing their product.

The industry has recorded multiple mergers & acquisitions which has boosted the overall competency of the companies operating in the ecosystem. The fierce rivalry among key industry participants as well as new market penetrants has led to the standardization of products on a global scale, thereby increasing the quality of end products in the market.