The global adiponitrile market size was estimated at USD 8.5 billion in 2018 and is expected to expand at a revenue-based CAGR of 4.9% from 2019 to 2025. Increasing the use of adiponitrile in the manufacturing of Hexamethylenediamine (HMDA) to produce polyamide 6,6 (Nylon 6,6) resin is anticipated to fuel the market growth. 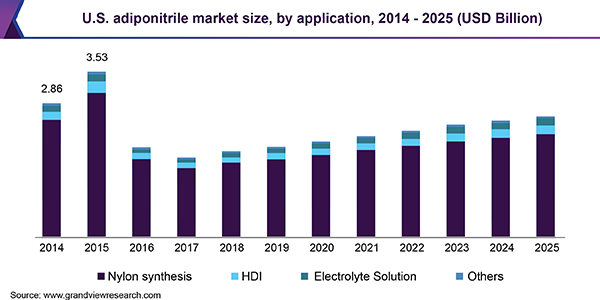 Polyamide 6,6 resin is used in the manufacturing of exterior and interior automotive components to reduce the weight of the vehicle and optimize fuel efficiency. In addition, the use of polyamide 6,6 in the manufacturing of high-performance apparel is expected to positively affect the market. Moreover, the increasing adoption of adiponitrile in the formulation of battery electrolytes is expected to fuel industry growth in the coming years.

Automotive parts manufacturing was the largest end-use segment, accounting for more than 40% of the global adiponitrile market volume in 2018, followed by textile manufacturing. Beneficial properties of nylon 6,6 such as lightweight, high strength, and excellent heat resistance are likely to facilitate the replacement of traditional materials such as aluminum in automotive manufacturing and synthetic yarn like polyester in the textile industry.

In the U.S. adiponitrile market, Nylon 6,6 accounted for a volume share of 86.6% in 2018. Adiponitrile is used in the production of hexamethylenediamine, which is used as a feedstock for the production of nylon 6,6. Manufacturers all over the world use hexamethylenediamine and adipic acid in a 1:1 ratio to produce nylon 6,6 resin. This polymer has been witnessing a rise in demand from the automotive, textile, and rubber manufacturing sectors.

Hexamethylene Diisocyanate (HDI) is manufactured by the phosgenation of hexamethylenediamine. The product is used as an additive in paints, coatings, adhesives, and enamels to improve the properties of the end products. The role of HDI in the manufacturing of coatings is significant as it helps improve the affinity of the coat to stick with the surface of the material. It also helps to improve moisture resistance, anti-scaling, and anti-corrosion properties of the material.

Adiponitrile is used as an additive in the electrolyte of lithium-ion batteries. The addition of the product into electrolytes increases battery power retention by more than 10% in every cycle. It suppresses the oxidative decomposition of electrolytes and stabilizes the interfacial impedance. In addition, adiponitrile increases battery performance when used as an additive in high voltage electrolytes. The increasing adoption of electric vehicles coupled with the rising demand for lithium-ion batteries is anticipated to propel the use of adiponitrile in an electrolyte solution. The segment is anticipated to witness the highest growth rate of 6.3% in terms of revenue from 2019 to 2025.

Polyamide 6,6 is used in more than 75 automotive applications, which include the manufacturing of radiator tanks, engine covers, pedal boxes, and a variety of other components. Previously, many of these parts were made of metals, such as aluminum and iron; however, the use of metal components resulted in a high weight of vehicles and thus affected the performance and fuel efficiency.

Polyamide 6,6 has superior properties such as heat resistance, stiffness, lightweight, resistance to hydrocarbons, better creep resistance, lubricity, and wear resistance. Thus, it is widely used to manufacture automotive components and accounted for 41.5% of the total volume consumption across the globe in 2018. 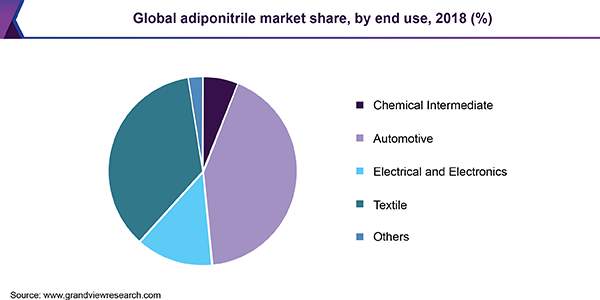 Nylon 6,6 fibers are extensively used in industrial yarn production as well as floor coverings globally. It has replaced other traditional cotton and other polymer yarns such as polyester in textiles, tire cords, and other applications. Companies such as DuPont de Nemours, Inc. and Ascend Performance Materials are crucial players in the nylon 6,6 fabric manufacturing industry and have a strong market presence across North America and Europe. Consumption of adiponitrile in the textile industry is anticipated to witness a CAGR of 3.3% in terms of volume from 2019 to 2025.

Application as a chemical intermediate includes the use of hydrogenated adiponitrile as curing agents in epoxy resins and elastomers. Curing agents are used for cross-linking polymer chains for hardening and toughening polymer material. Hexamethylenediamine along with carbon dioxide is used in the manufacturing of the chemical agent hexamethylenediamine carbamate which is used as a processing aid in the manufacturing of elastomers.

Fiat-Chrysler, Ford, and General Motors are the major players dominating the automotive manufacturing sector of North America. Major players in the electric vehicle manufacturing sector such as Tesla, Ford, and Chevrolet are anticipated to gain significant market share over the forthcoming period. As an effect of it, the North American region is expected to maintain its position as a major producer and consumer of the product in near future. The region is followed by Asia Pacific and Europe in terms of consumption of the product.

Kishida Chemicals is the major adiponitrile manufacturer in Asia Pacific catering to the domestic and regional demand for the product. Asia Pacific has witnessed increasing consumption of adiponitrile in automotive parts manufacturing owing to the presence of numerous OEM manufacturers across the region. Leading global players have been shifting their production bases to developing countries such as India and China in order to reduce production costs and cater to the market effectively.

The automotive market in Europe is well-developed and led by innovation and advanced technology. Countries such as Germany and the U.K. have a high consumption of nylon 6,6 in the manufacturing of various parts such as airbags, tires, and engine covers. The use of Polyamide 6,6 based carpets and apparel is also gaining popularity owing to its high durability, excellent appearance, and high moisture resistance. Rising electric vehicle manufacturing in these regions is expected to increase the consumption of adiponitrile in battery manufacturing applications, with a CAGR of 6.3% in terms of revenue over the forthcoming years.

Demand for adiponitrile is largely dependent on the requirement of hexamethylenediamine for the manufacturing of nylon 6,6 fibers and resins. As an effect of it, the majority of adiponitrile manufacturers are integrated across different stages of the value chain. For instance, Invista has integrated its manufacturing facility to produce adiponitrile, hexamethylenediamine, and nylon 6,6 fiber and resin to cater to various end-use industries. Moreover, Ascend Performance Materials has high internal consumption of the product to produce HMDA as a raw material for numerous Polyamide 6,6 manufacturers across the region.

This report forecasts volume and revenue growth at the global, regional, and country-level and provides an analysis of the latest industry trends in each of the sub-segments from 2014 to 2025. For the purpose of this study, Grand View Research has segmented the global adiponitrile market report on the basis of application, end-use, and region:

How big is the adiponitrile market?

What is adiponitrile market growth?

Which segment accounted for the largest adiponitrile market share?

b. The Asia Pacific dominated the adiponitrile market with a share of 38.5% in 2019. This is attributable to the rising consumption of adiponitrile in automotive parts manufacturing.

Who are the key players in adiponitrile market?

What are the factors driving the adiponitrile market?

b. Key factors that are driving the market growth include rising utilization of polyamide 6,6 resin in the manufacturing of exterior & interior automotive components to reduce weight of the vehicle and optimize fuel efficiency.

What is the adiponitrile market price?