The global ADME toxicology testing market size was valued at USD 4.33 billion in 2017 and is expected to register a CAGR of 11.4% over the forecast period. A rising number of drug molecules have been failing in the final stages of clinical trials, resulting in the loss of valuable time and investments in drug discovery and development. This has resulted in increased investments in the discovery of newer technologies for toxicity testing, which is set to boost the market in the coming decade.

ADME toxicology testing is mainly used for conducting various genetic, chemical, and pharmacological tests that aid the drug discovery process, starting from drug design to drug trials and other drug interactions. This process involves control software, various devices to handle liquids, and other detectors that help rapidly identify active compounds, genetic interactions, and other biomolecular interactions. However, most of these techniques need skilled expertise and software that can handle and store multiple sets of data at a rapid pace. This could limit market growth to an extent. 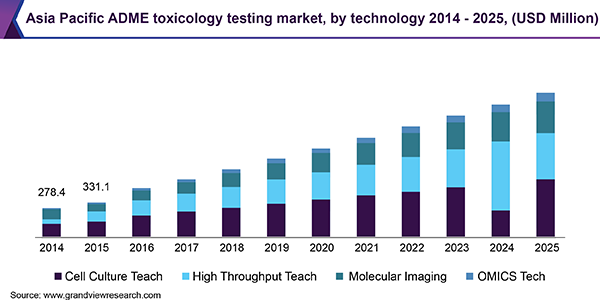 ADME toxicology testing is now done throughout drug design and development to prevent any late-stage failure and to ensure systematic evaluation to prevent the potential loss of a molecule or investment. Most companies follow GLP and non-GLP testing procedures to meet regulatory standards. Regulatory bodies are being pushed to establish tighter quality control standards to achieve integrity and accuracy of obtained and stored data. However, the lack of efficient software to handle automated robotic arms and liquid handling systems is likely to affect the market’s growth.

Regulatory changes from governing bodies such as U.S. FDA are likely to impact the market and the direction of innovations carried out. For instance, some departments of the FDA have asked companies to conduct ADME toxicology testing on animals experiencing the same disease state as humans, to draw a clear line between real-time results of the close situation and of results from normal animals.

With the growing need for newer therapies for a number of conditions, almost all technology segments are likely to present lucrative opportunities over the forecast period. Analyzing processed and screened data is the most important step and needs to be handled with accuracy for the required results. Recent trends have seen the development of software and chemical libraries that can aid in the establishment of the best standards and reporting of results.

Cell culture technology was estimated to be the dominant segment with a share of more than 40.0% in the market in 2017. Fluorometric imaging plate reader assays have emerged as the most used cell-based assays owing to visible results and their ability to test with the smallest of volumes. Ultra ADME toxicology testing is the latest technology being implemented in the field, resulting in increased output in lesser time. Many companies are in a transitional phase, shifting from traditional 2D cell cultures to 3D ones.

Three-dimensional cells show more lifelike properties while testing the natural environment and other cell-related manipulations aided in drug design and discovery. Various steps such as increasing the capacity of chemical libraries for the proactive identification of chemical identity hits while testing, development of hardware and software to handle and fully automate the testing process, and increased funding from governments and research institutes to adopt newer technologies and faster data processing software are key factors likely to boost overall market growth over the forecast period.

The cell assays segment has been the leading revenue generator in the ADME toxicology testing market with a share of around 45.0% in 2017. Factors such as highly detailed, accurate, and near-natural results of the cell assay method are aiding segment growth. Cell-based assays for physiological parameters are considered to be a bridge between laboratory and clinic for drug candidates. These assays do not necessarily eliminate clinical trials but rather help make human experimentation less of a gamble. They also limit the number of animals required for experimentation. This is slated to be an important factor amidst the increasing sensitivity to animal rights.

ADME toxicology testing is carried out for various human reactions to drug molecules. A few examples are systemic toxicity, hepatic toxicity, renal toxicity, and neurotoxicity. In 2017, systemic toxicity emerged as the leading revenue-generating segment owing to a surge in toxicity studies on the circulatory system. It is by far the most potent cause of toxic reactions in the human body.

Systemic toxicity held a market share of about 70.0% in 2017 and is expected to retain its dominance throughout the forecast period. Since the systemic circulation of the molecule is the most preferred method of drug distribution, it is also one of the major causes of toxic reactions, which may trigger multiple organs to fail. As a result, this segment has enjoyed a significant share in the market. 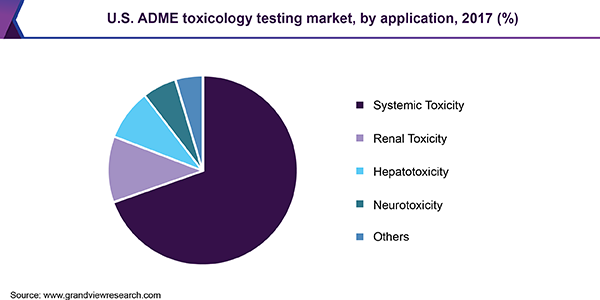 Renal toxicity and hepatotoxicity are other major applications slated to witness steady growth. Active research and studies are being carried out in these fields, which is expected to drive both segments to register a growth rate higher than that of systemic toxicity.

North America accounted for the largest share of more than 45.0% in 2017, with throughput/content screening emerging as a major contributor. This is owing to ongoing technological advancements in the field, particularly in the U.S. Drug discovery techniques using cell cultures have especially gained popularity among companies competing to reach the market with a new drug molecule. The Asia Pacific is set to grow at a significant pace over the forecast years due to increased efforts for new pharmaceutical molecules and the adoption of newer technologies to improve the standard of the medicine being supplied. China and Japan are key countries contributing to market growth.

This report forecasts revenue growth at global, regional, and country levels and provides an analysis on the latest industry trends in each of the sub-segments from 2014 to 2025. For this study, Grand View Research has segmented the global ADME toxicology testing market report based on application, technology, method, and region:

How big is the ADME toxicology testing market?

b. The global ADME toxicology testing market size was estimated at USD 7.8 billion in 2019 and is expected to reach USD 8.7 billion in 2020.

What is the ADME toxicology testing market growth?

b. North America dominated the ADME toxicology testing market with a share of 46.5% in 2019. This is attributable to ongoing technological advancements in the field, particularly in U.S. Drug discovery techniques using cell cultures has especially gained popularity among companies competing to reach the market with a new drug molecule.

Who are the key players in ADME toxicology testing market?

What are the factors driving the adme toxicology testing market?

b. Key factors that are driving the ADME toxicology testing market growth include a high rate of late-stage drug failure, an increasing need for novel drug molecules, technological advancements.